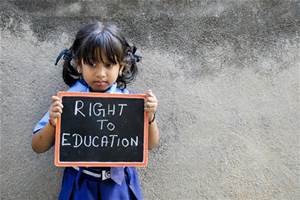 Essay Writing on GET IT RIGHT ON EDUCATION

GET IT RIGHT ON EDUCATION

The Sarva Shiksha Abhiyan was launched in 2001 to ensure that 190 million children in the age group of 6-14 would be able to attend school and receive quality preliminary edu­cation by 2010. In 2001, the number of out-of-school chil­dren in India was estimated to be about 39 million. Independ­ent surveys estimate that this number has fallen gradually to around 10 million in 2005. Could we then say that the Abhiyan is close to meeting its target? Quantitatively yes, but if we talk about quality education, India is far from achieving its goal.

The Annual Status of Education Report, a yearly survey conducted by an NGO, reveals that at least 50 per cent of these children cannot read a simple two-line passage. It fur­ther says that a greater proportion of about 65 per cent of the targeted population currently cannot do a simple two-digit division. Is this too much to expect of a child in class II? All the praises won by pushing children into school will be lost if we keep churning out students, who would be considered as literates by the census but wouldn’t be suitable for employ­ment. .

Who do we hold responsible for this failure? There are scores of NGOs who run schools or weekend classes. The response that these NGOs get is overwhelming. Some even charge a small fee, which is happily paid by parents. There are classes held in tiny rooms, where students say they are much happier than in a government school.

Just before we start blaming government, we should see if it actually has a positive intention to achieve its goal of universal education. The Centre increased its allocation for the Abhiyan from about Rs 1,600 crore in 2001 to close to Rs 7,000 crore in 2005. To ensure smooth funding, it even levied a 2 per cent education censes from 2004. So government has taken a few positive steps.

Who then is guilty? The poor results can be traced to two causes: first, government is not always the best agency to run schools; and, second, the lack of accountability. It is es­timated that it costs Rs 800 per month per child to run a gov­ernment school. Compare this to an AC Nielsen Survey re­sult, which says that the average fee per student charged by a private primary school is Rs 241 per month. One could argue that a government school invests in better infrastructure, even if it is not in a usable state. It is also true that a government school teacher gets paid nearly seven and half times higher than a teacher from a private unrecognized school. However, if the payout is not commensurate with productivity, such high payments are certainly not justified.

Moving to accountability; it is almost non-existent. The staff; cannot be questioned for non-performance. Excessive security of job leads to leniency. In a survey conducted in Rajasthan, over 25 per cent of teachers in primary schools were missing. To add to it, 10 per cent schools had no teach­ers.

Having said that, one of the solutions; could be a change in the way government is currently financing education. It could be a payer rather than a provider. Schemes like voucher funding could give students a choice to source their education. Vouchers are coupons given by government that cover total or partial cost of education at any school of the parent’s choice. Government instead of bearing the cost of running the school merely funds the students. The revenue collected from students takes care of the costs of running a school.

This helps in addressing both the issues mentioned above. The voucher gives parents the purchasing power that enables them to differentiate between a good and a poor school. Thus, it creates an incentive for schools to perform well. Schools that do not perform well would have to leave the market as the government would not bear any of its expenditure. Also, schools become accountable to parents rather than govern­ment. Parents could then question the school for non-perform­ance just like any other consumer.