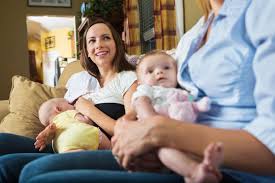 WOMEN EMPOWERMENT BY DEMYSTIFICATION OF MOTHERHOOD

Patriarchy has tactfully created a myth that motherhood is the only sphere that is essentially ordained for women. Women as a sex are considered to be the natural reproducers of mankind – naturally supposed to be the child bearers and rearers. Patriarchy celebrates this innate capacity of women as the so-called woman — power. It indulges in an exaggera­tion of the motherly values of nature. Self effacement, un­conditional love and devoted service are demanded from women for the perpetuation of patriarchal norms. This re­sults in an idealization of motherhood which confines women to their role as nurturers. Feminists from the West, recognize this vicious trap – that patriarchy elevates motherhood and misleads women is order to exploit and circumscribe them.

Feminists maintain that motherhood as constructed by patriarchy is highly oppressive. It is far from being a liberator and enriching experience for all women. It has been very im­portant to contest the point of patriarchy that happiness comes only through motherhood and attack this myth, which denies women their range of possibilities and opportunities. Betty Friedan relates the true essence of motherhood in her book The Feminine Mystique :

Motherliness is a way of life. It enables a woman to ex­press her total self with the tender feelings, the protective attitudes, and the encompassing love of the motherly women.

However, patriarchy misuses it as an instrument to sub­ordinate women as a whole. The experience of maternity has been channeled to serve male interests and to stabilize the patriarchal laws as the universal law for women.

In addition, the sanctity of motherhood is accepted only when acknowledged by matrimony. The man made society commands that motherhood is valid only within the bounds of marriage and it desecrates unwed motherhood as a curse for women. Simone de Beauvoir puts this aptly:

Maternity in particular is respectable only for married woman; the unwed mother remains an offense to public opinion, and her child is a sever handicap for her in life.

The feminists of the West understand the tyranny that goes on behind the glorified label of motherhood. Patriar­chy’s motive is always to enslave women and motherhood serves as a powerful way in enabling them to do it.

Motherhood, as “rewarded” to women by men, only serves to hamper the progress of both women and their children.. The social responsibility of the caring of children lies entirely on the mothers and they are expected to devote their time and their entire self on their children.

Feminists are rebellious over this attractive mystique framed with motherhood that exalts womanhood to divinity. They realise that mothers are silenced with this myth & are made to be mute. Feminists bring to light the suppression that comes upon women in disguise. They sense that this blind life is unhealthy for a woman. They emphasize that “the un­derstanding that mothering and self sacrifice are not mysti­cally paired would be a healthy change for society as for women” (Naomi)

The aversion for motherhood can be noted in many women characters constructed by women writers. Kate Cho­pin (1950 -1 904) is one such writer of the nineteenth century who effectively denounces the mystique that patriarchy asso­ciates with motherhood. In her works, she extols motherhood that does not damage the freedom of the mother or demand complete dedication and self – denial from the mother. She attached no importance to the glamorous mystique that patri­archy hands around motherhood. She discharged both the roles meticulously – the role of a mother and the role of a writer. One role did not disturb the other.

In The Awakening, Chopin’s masterpiece Edna Pontellier also shows no regard for motherhood. She did not consider it to be a sacred duty, for which she had to sacrifice herself and devote her entire being,. Chopin specifies that Edna, the pro­tagonist is “not a mother woman”(26). Edna rejects the role of a nurturer as she cannot efface herself and treat mother­hood as the ultimate destiny of essential motherhood”.

What makes Edna not a mother woman is her refusal to give herself for her children? Her motherhood is arbitrary, imposed, and unwilled. She affirms that she would give “her life up for her children but she would not give herself up”. She would give up “the inessential but she would not give up her very being”. Though Edna loves her children, she is un­able to accommodate both motherhood and autonomy and conceives an independent existence of her own. Therefore, she resorts to suicide. Motherhood does not restrain her from attaining her identity through death. She attacks the mystique of motherhood in her own way by preferring death to surren­dering her own self to patriarchy.

Another writer of the twentieth century, who showed her vehement hatred towards motherhood and the patriarchal con­straints on it, is Sylvia Plath. Sylvia Plath never inclined to stoop to serve patriarchy in any way. She disregards the patri­archal definitions of motherhood.

Plath felt that motherhood will stifle her and damn her into the domestic sphere that patriarchy assigns for women. In The Bell Jar Esther Greenwood believes that having a baby will lead her inescapably into the trap of patriarchy. To stay away from patriarchal clutches and to remain free and unin­hibited, she decides to sterilise herself. Only after this, she confidently states, “I was my own woman”.

As per patriarchal definitions, it is motherhood, which is the essence of a woman, and it culminates her life as a woman. However, Plath explodes this myth of motherhood that patriarchy has so successfully and effectively built. For her, writing gives her the identity that she requires to live a worthy and healthy life. Motherhood is only a tiresome bur­den that robs her of her identity, both as a woman and as a writer.

Hence, it is obvious that women writers of the West as the two American writers cited above are against the male prescriptions of motherhood. In the Indian context, male ad­vocates of women’s freedom such as Periyar, Thiru. V. K. Bharathi, Tagore and Gandhiji have also exalted motherhood to divinity. However, they are not exceptions to endorsing the mystique on motherhood built by patriarchy. The same idea is emphasized in Madame Bovary by Flaubert and Anna Karenina of Tolstoy. A Woman, as Mother, should be seen on a balanced scale as a being whose self is not trampled upon. Motherliness can be celebrated, but not at the altar of sacri­ficing the innate capabilities in a woman. This balanced pic­ture should emerge from studies regarding women in differ­ent cultures. Only when women demystify and deconstruct the biased patriarchal definitions of motherhood, they can get empowered to venture out into the world of biased men.