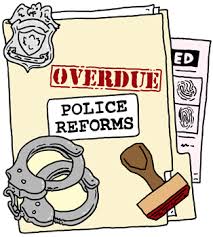 It is a known fact that the image of the police has fallen into an abyss of lawlessness in recent years. People want an efficient Police which serves them in need. The poor want reforms because they are the crude victims of oppression and dictates of the powerful, rich and so they need the true services of the police for their rescue. The National Human Rights Commission demands reforms because it is overwhelmed by public complaints against the police that range from death, rape and torture in custody to the refusal to file FIR, manipulation coercion and threats to witnesses and demands for money to register, neglect or pursue a case. The Supreme Court pulled up the police for inefficiency, neglect and corruption prevailing in many cases and passed serious strictures against the functioning of the police.

Despite demands from all quarters and necessity to reform the Police force, no concrete or resulting action has so far initiated by any government since independence. Paradoxical all it appears, that a country which so emphatically threw off the British yoke is satisfied to be ruled by a colonial Act, whose main objective was to subjugate the population. Every successive government avoiding so far the necessary reforms in police force indicates the obnoxious nexus between the police, and politicians, the Police and the executives and a belief that if the reforms be made, the benefits being derived by them from the police will no more be available.

Necessity of a new Police Act is undoubtedly being felt in all segments of the society. The new Act needs to state that the Police must act strictly according to the law and not as per whims of any powerful politician or executive. It needs to be systematized by a new statutory framework that fixes the accountability and responsibility, makes it certain that the chains of command lies within the police, their promotions, posting and punishment do not depend upon the patronage from the political bosses. A greater transparency, more, accurate mechanism of segregation of work and devolving of responsibility is required.

In 1977, the National Police Commission recommended analyzing carefully the problems of the police and pressures faced by the police force. The recommendations mainly dealt with two aspects, one insulating the police from undue political pressure and accountability of the police to law alone and not to any person. The Rebeiro Committee also gave its recommendations along similar lines to the NPC, as also the Padmanabha Committee. The Vohra Committee indicated in very clear terms that the Police-Politicians Mafia nexus is ruining the governance.

In Short Reasons for Reforms can be summed up as

There have been umpteen numbers of demands to reform the Police system and laws as these are unable to deal with the contemporary challenges.

Pro-reformists have been arguing that the 1856, Indian Police Act was framed in an age in which the crimes as witnessed these days were far from imagination.

The Supreme Court asked the government to bring about the police reforms soon.

Objectives of the Reforms are

The most significant aspect of the proposed reforms is intended to be the mechanism so as to end external influence on the law enforcing body and improve the standards of police personnel.

The aim is to make police efficient, effective, people friendly and accountable by ending corruption and breaking the cops’ nexus with anti-social elements.

The recommendation on fixed tenure will go a long way in ensuring prevention of external influence which is known to be the major cause of inefficiency in the police departments.

Under the new Act, DGP and police officers on operational duties in fields like IGP in charge of a zone, DIG of a range and SP in the district would have a minimum fixed tenure of two years, unless promoted, removed on disciplinary grounds, found involved in corruption or faced criminal charges.

The police establishment board would look after transfers, postings and promotion of officers below the rank of DSP and other personnel.

The committee also recommended creation of an independent mechanism to look into complaints against police personnel and ensure that no ‘extraneous’ pressure is used for transfer or suspension of cops.

The committee emphasizes that police should not be subjected to arbitrary transfers and suspensions and wants the government to ensure that cops are not made to carry out illegal orders.

The new act should have legal provisions to penalize any person who is found interfering with the functioning of police.

The committee also made recommendations with regard to transparent appointment of Directors General of Police and other heads of police departments.

It has suggested that the choice should be made from a panel of three senior-most officers.

Keeping in view the realities, it has said that if any State Government has any objection to the appointment of any particular officer, it will have to give cogent reasons.

There is a proposal to set up the national security commission, ‘for the selection and placement of chiefs of Central Police Organizations’, to ensure that the DGPs of paramilitary forces like the BSF, CRPF, ITBP, SSB and CISF are selected in a fair manner and have a fixed tenure of at least two years.

In states, the State Security Commission would act as a watch dog and be headed by the Chief Minister or Home Minister with a DGP as Ex-officio Secretary.

Noting that accountability was paramount, the report seeks to introduce criminal penalties for some of the common derelictions like non-registration of FIRs, unlawful arrest and detentions.

Another crucial suggestion made by the committee is bifurcation of investigation and law and order duties.

With regard to special crimes like cyber crimes, organized crimes, homicide and economic offences, the committee wants the State Government to establish Bureaux of Crime Investigation.

For making the working conditions of police personnel better, the committee has advocated various measures like filling up of vacancies, launch of welfare measures like fixed duty, compulsory one-day weekly off, better mobility and office automation.

Stress management and regular medical check-up of police personnel have also been recommended to curb the tendency of suicides committed due to mental pressures.

The recommendations are significant with far reaching implications and it is only hoped that these are implemented at the earliest and in letter and spirit.

For the first time in about two years, the Supreme Court on 14th March, 2008 expressed its willingness to have a committee in place to monitor the implementation of police reforms across all states and UTs, including the centre.

Second Law Commission under Chairmanship of Mr. Veerappa Moily has also recommended wide scope Police reforms so as to enable more independence to the law implementing body. It intends to make Police free of political influence and more responsible and friendly to the general public.

It voiced regret that neither the Central Government nor the states appeared willing to implement the police reforms.

The Government and several states, like Odisha, UP and Bihar have been dithering on the implementation of sweeping reforms in the Police machinery for over a year now, seeking more time for implementation or modification of the earlier order.

In UK, the policeman is nobody’s valet, and it is the duty of the Commissioner of Police as it is of every chief constable to enforce the law of the land and he is answerable to none but to the law alone. In India, a policeman is like a football to be kicked about by any one and when he is needed no more he could be dispensed with like a disposable item. The plight of the police shows the sorry plight and predicament of the entire system. Let us not blame the police if the system, the political and administrative system within which they have to operate has become rotten to the core.

Whatever is argued by anybody it is undisputable that reforms. In Police is the need of hour. It is ridiculous that our police force is still being governed by the outdated Police Act, 1861. If police reforms are delayed further, there will be no end to the trauma of the ordinary people, especially those who have no Godfather, no political support.