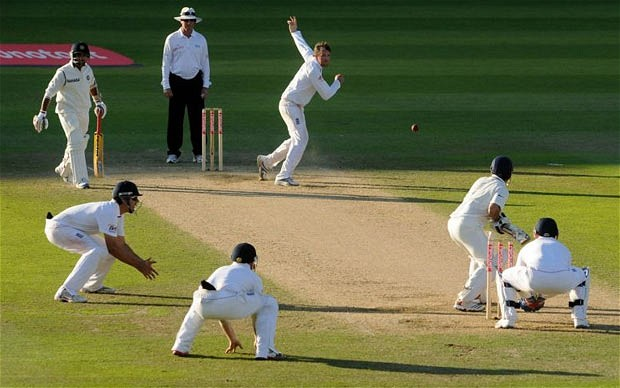 After partition, it was the first time when thousands of Indians poured into Pakistan by road, rail and by air to watch the India-Pakistan ODI and Test Series.

Kudos to the people of Pakistan who welcomed every Indian with such affability and geniality, that had no parallel since partition. Even, the long history of cricket matches between the two countries never find such a praise and admiration, which made everyone believe, as if two brothers are playing and vying to win without any animosity towards each other. The earlier cricket matches between India and Pakistan were played like a war and with hysteria over victory and defeat. The spirit of sportsmanship was always lacking, when India and Pakistan were face to face in cricket ground. The win or defeat was always witnessed as gain or loss of pride of the country, such was an attitude of the players, of the people of both the countries, but this tour of Indian Cricket team has altogether changed the scenario. At the Gaddaffi Stadium, the Indians and Pakistanis sat together, enjoyed together, cheered together and jointly carried the flags of the two countries stitched together. Many young Pakistani girls wore the flag colours of the both the countries on their faces. A six or four by an Indian player earned the same applause as by a Pakistan player. Fifty or Century by a player of any country was given the same clapping and thumping. The team mates of Indian side, who earlier seemed worried for their safety and security, enjoyed the cricket and hospitality in such a manner, that was never imagined in their dreams on the

After Indian team won the first one day test, an excited Mr. Vajpayee said, “When 11 players play together victory is certain. There is no reason for victory to elude us, when 100 crore people take a pledge”.

Laurels to Pakistani President Gen Pervez Musharraf, who hosted a reception for the Indian team in his Presidential Mansion in Islamabad on 17th March, 2004. The President astonished the Indian players by recalling some of their best performances, he had seen in the past. He was all praise for Tendulkar’s batting skills and Balaji’s blitzkrieg against the fast bowler Shoaib Akhtar in the match the previous day.

The President hosted the reception at the Banquet Hall, usually reserved for visiting Heads of Government. The magnanimous attitudes of the President indeed cleaned bold every player and won their humours and good wishes for the peace and tranquility in the subcontinent.

Undoubtedly that tour of Indian team to Pakistan positively helped the two countries forge their friendly ties and brought people of the two countries together. It was observed and felt by every Indian visited Pakistan that the cultures, language, traditions of both the countries are too identical to make a difference. A Sikh from Punjab put things in the characteristic humour of Sardars, How does one figure out who is an Indian and who is a Pakistani? Same look, same language, same food, same dishes, same dressing pattern, same traditions, when almost all things are the same, why the blood of innocent peoples was being shed for the communal and political needs of the few.

India and Pakistan had played 86 one day Internationals and 47 Test Matches prior to the 2004 tour, every match was like war being fought for the honour of the nations, but this tour of Indian cricket team to Pakistan opened new vistas of friendship, fraternity if not between the rulers but between the people of both the nations. A new light emerged in Indo-Pak relations in the wake of the friendly tour, said well known Pakistani supporter popularly known as ‘Chacha’.

One Pakistani fan said, “We are going to prove to Indians that not all of us are Al Queda or Jehadis. Moreover, the generation has changed; my generation didn’t witness the barbarity of partition and savage of Indo-Pak War. It is an educated peace loving, career oriented generation, who wants love for love affection for affection.”

Almost all the Indian visitors confessed that they would treasure the experience of a life time—the love and hospitality shown by the common people of Pakistan. That was is the need of hour that the leaders of both the countries particularly the leaders of Pakistan must understand and realize that for the betterment and prosperity of the nation for the well beings of the people, they must keep aside the matters of dispute and go together to harness the booty of globalization with sincere efforts and open heart. The cricket had paved the path, the leaders were, to move forward in the direction of peace, progress and prosperity.

The championship game between Sri Lanka and India, played in Mumbai on 2nd April, was a great tribute to the mega-city that experienced the horrific 2008 terrorism episode in which 166 people died. With four-to-five layers of security, Mumbai was fully protected like a fortress, which included a “no-fly” zone enforced by the Indian Air Force, and anti-aircraft batteries strategically placed around Wankhede Stadium and other city vantage points.

All those anti-terrorism preparations must have terrified the terrorists, but not the teams and the players since they all played brilliantly. While both Sri Lanka and India were already winners by being in the final-of-all-finals, unfortunately, only one team-could ‘hold the championship trophy after the players delighted the massive audience with their beautifully crafted cover-drives, boundaries, lofted sixes and “doosras and googlies,” to use cricket jargon.

Luckily India won, concluding the drama of minute-by-minute changing game fortunes, and thus, confirming their batting superiority in the cricket world. In a country where extreme riches and poverty go hand-in-hand and where almost 50% wallow in utter poverty, the victory triggered a billion-people party throughout the length and breadth of India, like no other party.

But, a greater victory took place during the semi-final game between Pakistan and India at Mohali, Punjab, in which the Prime Ministers of both countries came together as part of the ‘cricket diplomacy’ to watch the closely contested match, and perhaps, touch on how to revive the moribund political dialogue that broke after the Mumbai terrorism incident.

Looks like the cricket diplomacy afforded by that cricket event and an off-the-cuff side meeting between Pakistan Prime Minister Syed Yusuf Raza Gilani and his Indian counterpart Dr Manmohan Singh, may have paid off.

After that close contest, it is no wonder that Pakistan wants more cricket games with India, and so do Indians since it raises the cricketing fraternity between the two countries. But first, India wants Pakistan and its Inter-Services-Intelligence to stop playing the terrorism-games. I seriously believe that if Pakistan and ISI were to trade ‘terrorism’ with ‘cricket’ — it would make Pakistanis’ much more prosperous and a lot happier, since the event boosts both wealth and the sporting spirit.

The best payoff of the World Cup games has to be this new hope about India-Pakistan relations moving forward on the wheels of cricket. Should they result in resolving any of their tricky problems, cricket could become the tool of peace for the long-term good of both the nuclear-armed countries. Pandey’s baring act is just a fleeting euphoria and an ‘extra-run’ to use another cricket jargon.