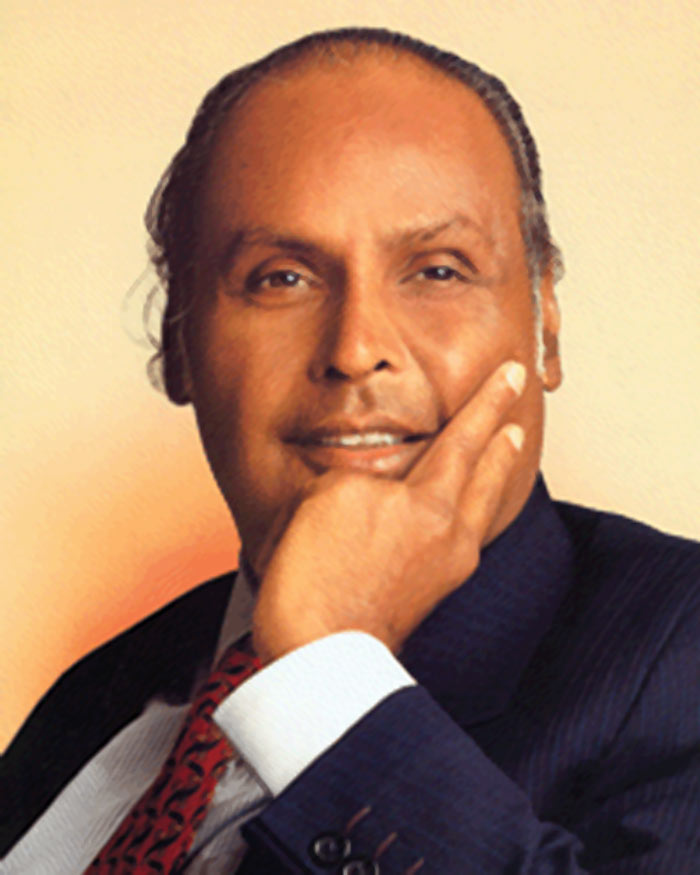 “Between my past, the present and the future, there is one common factor: Relationship and Trust. This is the foundation of our growth.” -Dhirubhai Ambani

Mr. Ambani was born in Chorwad, a village in Saurashtra, Gujarat. When he was 17 years, he went to Aden (now part of Yemen) and worked for A Besse & Co Ltd, the sole selling distributor of Shell products. He returned to Mumbai in 1958 and started his first company, Reliance Commercial Corporation, a commodity trading and export house. In 1966 as a first step, in Reliance’s highly successful strategy of backward integration, he started the textile mill in Naroda, Ahmedabad. In 1975, a technical team from the World Bank certified that the RIL textile plant was ‘excellent by developed country standards.’ In 1977, the company went public.

Dhirubhai Ambani an entrepreneur who built up the only Indian business to feature in the Forbes 500 was one of India’s most dynamic and flamboyant entrepreneurs. Dhirubhai Ambani was head of the multibillion-dollar Reliance group of industries with extensive interests in textiles, petrochemicals, energy and telecommunications. Combining a keen sense of business with a razor-sharp ability to negotiate his way through the labyrinth of the Indian political establishment, Ambani single-handedly built a business empire that, in just three decades, outgrew corporate houses such as the Tatas and Birlas which had dominated the country’s industrial landscape for nearly a century.

Reliance is the only Indian private company to make to the fortune 500 list of the world’s largest corporations and Ambani was listed by Forbes as the 138th richest person in the world.

The son of a petty trader from a remote village in rural Gujarat, Dhirajlal Hirachand Ambani — known as Dhirubhai — moved to Aden as a teenager in order to seek his fortune. He started work as a petrol station attendant before taking up a clerical position for an oil company that was the sole distributor of Shell products there. While in Aden, home too many Gujarati expatriates, he realized that a discrepancy between the rial-sterling exchange rate and the intrinsic value of the silver content in Aden’s coinage afforded an excellent opportunity to make money. This arbitrage generated some $ 3000 in seed money for the modest trading enterprise that Ambani set up when he returned to Bombay in 1958.

The trading house Reliance Commercial Corporation began by importing polyester yarn and exporting spices. This was the era of India’s infamous ‘license-permit raj’, when businessmen with political connections could corner export, import and manufacturing licenses and accumulate huge fortunes.

Sensing an opportunity in the textile industry—higher disposable incomes were leading to Indians buying better, more expensive clothes—Ambani sought and received the necessary clearances to manufacture cloth from polyester fiber. He opened his first textile mill in Naroda near Ahmedabad in 1966 and then concentrated on quietly building up his business. Vimal, the textile brand he established flourished and remains a household name in India today.

Though, Reliance was a profitable enough concern, Ambani quickly calculated that further expansion—especially into related sectors would depend on access to a cheap source of capital. Rather than turning to the banking system, he decided to tap Bombay’s fledgling stock exchange, pioneering an equity cult that was to transform the corporate financing system in India. Reliance’s initial public offering in 1977 saw 58000 investors buying shares; eventually, the number of Reliance shareholders was to climb to some three million.

In 1982, Ambani began the process of backward integration, setting up a plant to manufacture polyester filament yarn. He subsequently diversified into chemicals, gas, petrochemicals, plastics, and power and telecom services.

By the late 1980s, the Reliance group was one of India’s most influential and profitable concerns. However, the phenomenal growth of Reliance owed as much to Ambani’s acumen as to the ease with which he was able to get official rules and regulations — including import tariffs — introduced, amended or scrapped in order to undercut his rivals and push his own business interests. His methods earned him many bitter enemies in India’s corporate world. Ambani nevertheless forged ahead, cultivating friends in virtually every Indian political party and managing the media in such a way that critical stories about Reliance’s unconventional business methods seldom made it into the newspapers.

The final phase of Reliance’s diversification occurred in the 1990s, when the company turned aggressively towards petrochemicals and telecommunications. But, like most business people, Ambani had rivals, the most bitter of whom was Nusli Wadia of Bombay Dyeing, a patrician entrepreneur whose company was well established in the textile industry.

Ambani was also anxious to encourage the spread of information technology among India’s poor. Through Reliance Industries, he arranged computer education and training for thousands of students in schools in Bombay. “You are getting an opportunity. Make the best use of it,” he told children in December during one of his last public speeches. “Be daring. Think big. You can be the best. If you believe in this, you will be the best.”

His two America-educated sons have been in day-to-day control of the company since he suffered a stroke in 1986.

He was awarded entrepreneur of the 20th Century’ award in March 2000 by FICCI (Federation of Indian Chambers of Commerce and Industries), for his meticulous scripting of one of the most remarkable stories of business endeavour of the 20th century. He was thrice (2000, 1998 and 1996) nominated as one of the Tower 50 -the most powerful people in Asia by Asiaweek magazine. He was voted the most admired Indian of the miller     man in the field of Business and Economics in ‘Legends – A Celebration of excellence’ poll audited by Brnst and Young for Zee Network, January 2000. He was voted as ‘Creator of Wealth’ of the century in The Times of India poll, January 2000. He was chosen as one of the three ‘makers of equity’ by India Today in their special millennium issue entitled “100 People Who Shaped India in the 20th Century”, January 2000. He was chosen by the Indian Merchants Chamber as “An Outstanding Visionary of the 20th Century” in recognition of his unique achievements and contribution in the development of industry and capital markets in India, December 1999. Mr. Ambani was voted as “Indian Businessman of the Century” in Business Barons Global Multimedia Poll, December 1999. Mr. Ambani was placed amongst “The Power 50 – India’s 50 most powerful decision-makers- in Politics, Business and Finance”, Business Barons, August 1999. He was declared ‘Most Admired Indian Business Leader’ by Times of India, Indiatimes.com poll in July 1999. Mr. Ambani was rated as ‘India’s   Most   Admired CEO’   in the Business   Barons-Taylor Nelson Sofres-Mode survey in July 1999. He was the only Indian industrialist in ‘Business Hall of Fame’ in Asiaweek, October 1998. Mr. Ambani was awarded the Dean’s Medal in June 1998 by The Wharton School, University of Pennsylvania for setting an outstanding example of leadership. He was chosen as a star of Asia in June 1998, by Business Week, USA. The leading business magazine Business Barons placed Mr. Ambani in its list of “India’s 25 Most Influential Business and Financial Leaders”, in June 1998. In 1994, he was awarded the Companion Membership of the Textile Institute, UK – an award which is limited to 50 living members who have “substantially advanced the general interests of the industries based on fibers” He was chosen as ‘Businessman of the Year 1993’ by India’s leading business magazine, Business India, January 1994.

Think big, think fast and think ahead. Born in 1932, his father is a school teacher in a small village of Chorwad in Western Gujarat state; Ambani followed this advice all his life. He dreamt big even as a small boy when he used to sell hot snacks to pilgrims outside a temple in his native village.

When Ambani died after nearly two weeks in a stroke-induced coma, the country’s media recounted his rags-to-riches life as an Indian morality play. He died in Mumbai on 6 July, 2002, aged 69. Dhirubhai Ambani is survived by his wife, two sons and two daughters.

“Meeting the deadlines is not good enough,

Beating the deadlines is my expectation.”

“Don’t give up, courage is my conviction.”