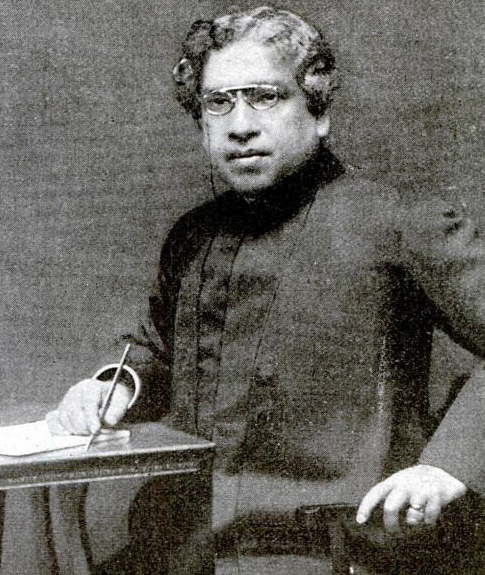 “Bose, (Sir) Jagdish Chandra (1858-1937), pioneer in the field of Physical, Electro-Physiological and Plant-Physiological research in India, was a great Physicist, a great Biologist and a unique personality of his time.”

Jagdish Chandra Bose was born on 30th November, 1858, in Mymensingh (now in Bangladesh). His early education was in a village Patshala in the Bengali medium, till the age of 11. In 1869, he was sent to Calcutta to learn English and was educated at St Xavier’s School and College. Here he came into contact with Fr Eugene Lafont SJ who inspired him. He passed BA in Physical Sciences in 1879.

In 1880, Bose went to London, where he joined a medical school. Due to ill health, he had to give up the study of medicine. He then joined Christ’s College, Cambridge. In 1884, he obtained the BA degree of the Cambridge University.

On returning home, he was appointed in 1885, as Assistant Professor of Physics in the Presidency College which could come through only by the intervention of Lord Rippon, then the Viceroy of India. Bose accepted the job but refused to draw his salary, which was fixed at half than that of an Englishman for the next three years. His demand was conceded by a special order from the government.

The tendency of the British contempt for Indians doing science stung Bose. He resolved in 1894, at 36, to become a scientist rather than remain a science teacher. He saw embarking on scientific research as a means to confound the British critics and for his country to recover her ancient glory.

Bose made waves in Calcutta as Hertz had done in Karlsruhe. He produced some thirteen papers: seven in the proceedings of the Royal Society, one in Philosophical Magazine and the others in The Electrician.

The ordeal of scientific solitude was temporarily broken in 1896, when Bose made the voyage to England. At the meeting of the British Association of Advancement of Science, Liverpool, he demonstrated his apparatus for the study of the properties of electric waves. History was being made, his wife recorded, as Bose stood in front of the world, prepared to wage the battle in the realm of science. Among those present, she saw Oliver Lodge, Lord Kelvin and J J Thomson. The ageing Kelvin limped up to the gallery and congratulated her on her husband’s work.

On Friday 29th January, 1897, Bose delivered at the Royal Institution the famed ‘Evening Discourse’ on “The Electromagnetic Radiation and the Polarization of the Electric Ray.” The University of London conferred on him the D Sc degree for his work on electric waves. Bose’s discourse gave a clear indication that his work was the one belonging to a cultural tradition which was not rooted in Europe. It was also, as much, the realization of Sircar’s vision of scientific research in India.

The origin of radio telegraphy has a convoluted history which historians are still trying to unravel. Bose has a definite place in this history. It is true that Bose’s article appeared in The Electrician in December, 1895, Marconi may well have chanced upon it. But by then, the latter’s experiments were well under way and thereafter their paths diverged. Bose made many important contributions to the elucidation of ‘coherer’ action. Bose’s coherer took the form of a single metal point contact on a metal plate, which was used as an early form of radio detector, that figures in the history of solid-state Physics. He published several books, well known among them, Comparative Electro-Physiology (1907) and Response to the Living and Non-living (1920).

Bose performed delicate experiments on plant life and invented recorders of high magnification and great precision. Bose was knighted in 1917 and was elected FRS in 1920, the first Indian physicist to receive the honour. He founded the Bose Institute in November, 1917, largely with his own fortune and donations from the government and his well-wishers. He served as a life-time director till his death.

Unlike his great contemporary, Prafulla Chandra Ray, he did not show much interest in the social and economic implications of sciences, in the powers of science to ameliorate the condition of man and society. He was deeply philosophical and had a taste for literature and art of which he has left ample evidence in his writings, particularly in his Bangla book Avyakta, and in the planning and artistic decoration of the Bose Institution. Sir Jagdish Chandra Bose died in 1937.