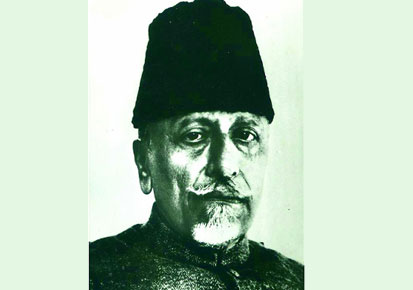 Maulana Abul Kalam Azad ranks together with Mahatma Gandhi and Jawaharlal Nehru as one of the foremost leaders of the Indian National Movement. An erudite scholar of Islamic theology, he had a strong intellectual bent of mind and an inborn flair for literary writing. Making his debut on the Indian political scene as a young journalist with strong Pan-Islamist views, Azad grew over the years into a front-rank Indian nationalist who steered the destiny of the Indian National Congress as its President twice, first in 1923 and from 1940 to 1946 subsequently.

Born in 1888, Firoz Bakht (of exalted destiny), commonly called Muhiyuddin Ahmad, was only two years old, when his father Maulana Khairuddin, settled at Calcutta and became famous there as a spiritual guide.

Till in his teens, Muhiyuddin used the pseudonym Abul Kalam Azad acquired a high reputation for his writings on religion and literature in the standard Urdu journals of that time. Azad attained most of his education from his father. He did not go to any Madrasah or school, nor did he attend any modern western educational institution. Learning at home, he completed the traditional course of higher Islamic education at sixteen. At the same time he was exposed to the writings of Sir Syed Ahmad Khan. Keeping it a secret from his father, he started learning English and by his own acquired enough knowledge of the English language to study advanced books on History and Philosophy.

He wanted to see his country free from the British rule. But, he did not approve of the Congress Movement on account of its ‘slowness’ also he could not join the Muslim League whose political goal he found unpredictable. Thus, he associated himself with the Hindu revolutionaries of Bengal in spite of their ‘exclusive’ and indifferent attitude towards the Muslims. He managed, however, to convince them that the exclusion of the Muslims from the group would make political struggle much more difficult.

To make his community politically aware Azad started from 13th July, 1912, an Urdu weekly, the Al-Hilal (The Crescent), from Calcutta. Its influence was prodigious. Azad was politically and religiously radical. The paper shocked the conservatives and created a furore, but there were many Muslims ready to follow him. In the pages of the Al-Hilal, Azad began to criticize the ‘loyal’ attitude of the Muslims to the British, and the ‘hostile’ attitude of the British to the Muslim world in general. The Government of Bengal unhappy with editorial policy put pressure on the paper. Meanwhile, World War I broke out and publication was banned in 1914 by the Bengal Government. From 12th November, 1915, Abul Kalam started a new weekly, the Al-Balagh from Calcutta which continued till 31st March, 1916. The publication of the Al-Balagh was also banned by the Government of Bengal and Maulana Azad was exiled from Calcutta under the Defence of India Regulations. The Governments of Punjab, Delhi, UP and Bombay had already prohibited hit entry into their provinces under the same regulations. The only province he could conveniently stay in was Bihar and he went therefore to Ranchi where he was interned till 1st January, 1920.

From 1920 till 1945, Abul Kalam Azad was frequently imprisoned for a number of times. After he was released from Ranchi, he was elected President of the All-India Khilafat Committee (Calcutta Session in 1920) and President of the Unity Conference (Delhi) in 1924. In 1928, he presided over the Nationalist Muslim Conference. He was appointed in 1937 a Member of the Congress Parliamentary Sub-Committee to guide the Provincial Congress Ministries. He was twice elected President of the Indian National Congress, the first time in 1923 when he was only thirty-five years old, and the second time in 1940. He continued as the President of the Congress till 1946 as no elections were held during this period as almost every Congress leader was in prison on account of the Quit India Movement (1942). After the leaders were released, Maulana Azad, as the President of the Congress, led the negotiations with the British Cabinet Mission in 1946, and when India became independent he was appointed Education Minister and continued in that capacity till death on 22nd February, 1958.

Azad was not an influential religious leader. He expressed himself in Urdu and thus limited himself to a particular group. The majority of the Indians did not really know what Azad was saying. Another reason was political. He was in the Congress, and was considered a party-man. Thus, whatever he said about the unity of religion was taken by many Muslims, who used to read, him as the reflection of his political ideas, and therefore, had to be discarded. Also, on the question of Muslim’s traditional religious education, Azad was treated as an unorthodox. He was among those few who were not shaken in their faith in composite nationalism even by partition. He was a great orator and a great writer.

Maulana Azad made an outstanding contribution to induction of Muslim masses into the mainstream of national struggle for independence in opposition to the Aligarh School, led by Sir Sayyid Ahmad Khan. He also stood firmly committed to the cause of united India in the face of strong opposition by the Muslim League, led by Mohammad Ali Jinnah.