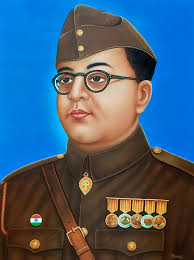 “Patriot of Patriots”, this is how Mahatma Gandhi described him Subhash Chandra Bose, popularly known as Netaji, occupies an honoured place in the history of Indian independence movement. He was a man of great courage, a single minded and dedicated leader completely filled with patriotism. He wanted to free India from British yoke not by peaceful means or petitioning but by waging open war”.

Known as Netaji (leader), Mr. Bose was a fierce and popular leader in the political scene in Pre-Independence India. He was the President of the Indian National Congress in 1937 and 1939 and founded a nationalist force called the Indian National Army. He was acclaimed as a semi god, akin to the many mythological heroes like Rama or Krishna and continues as a legend in Indian mind.

Subhash Chandra was born on 23th January, 1897 in Cuttack as the ninth child among fourteen, of Janakinath Bose, an advocate, and Prabhavati Devi, a pious and orthodox lady. A brilliant student, he topped the matriculation examination of Calcutta province and passed his BA in Philosophy from the Presidency College in Calcutta. He was strongly influenced by Swami Vivekananda’s teachings and was known for his patriotic zeal as a student. His parents’ wishes kept him away from the Indian freedom struggle and sent him to England to prepare for the Indian Civil Service. Although he finished those examinations also at the top of his class (4th), he could not complete his apprenticeship and returned to India, being deeply disturbed by the Jallianwala Bagh massacre. He came under the influence of Mahatma Gandhi and joined the Indian National Congress. Gandhiji directed him to work with Deshbandhu Chittaranjan Das, the Bengali leader whom Bose acknowledged as his political Guru.

Bose was outspoken in his anti-British stance and was jailed eleven times between 1920 and 1941 for periods varying between six months and three years. He was the leader of the youth wing of the Congress Party, in the forefront of the trade union movement in India and organized Service League, another wing of Congress. He was admired for his great skills in organizational development.

Bose advocated complete freedom for India at the earliest, whereas the Congress Committee wanted it in phases, through a Dominion status. Other younger leaders including Jawaharlal Nehru supported Bose and finally at the historic Lahore Congress convention, the Congress had to adopt Poorna Swaraj (complete freedom) as its motto. Bhagat Singh’s martyrdom and the inability of the Congress leaders to save his life infuriated Bose and he started a movement opposing the Gandhi-Irvin Peace Pact. He was imprisoned and expelled from India. But defying the ban, he came back to India and was imprisoned again. Clouds of World War II were gathering fast and Bose warned the Indian people and the British against dragging India into the war and the material losses she could incur. He was elected President of the Indian National Congress twice in 1937 and in 1939, the second time defeating Gandhiji’s nominee. He brought a resolution to give the British six months to hand India over to the Indians, failing which there would be a revolt. There was much opposition to his rigid stand, and he resigned from the post of president and formed a progressive group known as the Forward Block (1939). The Second World War broke out in September of 1939, and just as predicted by Bose, India was declared as a warring state by the Governor-General, without consulting Indian leaders. The Congress party was in power in seven major states and all state governments resigned in protest.

Subhash Chandra Bose now started a mass movement against utilizing Indian resources and Indian army personnel in this war. To him, it made no sense to shed the blood of Indians for the sake of colonial and imperial nations. There was a tremendous response to his call and the British promptly imprisoned him. He took to a hunger-strike, and when his health deteriorated on the 11th day of fasting, he was freed and was placed under house arrest. The British were afraid of violent reactions in India, should something happen to Bose in prison.

Bose suddenly disappeared in the beginning of 1941, and it was not until many days that authorities realized Bose was not inside the house they were guarding. He travelled on foot, by car and train and resurfaced in Kabul (now in Afghanistan), only to disappear once again. In November 1941, his broadcast from German radio sent shock waves among the British and shocked the Indian masses who realized that their leader was working on a master plan to free their motherland.

The Axis powers (mainly Germany) assured Bose, military and other help to fight the British. Japan by this time had grown into another strong world power, occupying key colonies of the Dutch, the French, and the British in Asia. Bose had struck alliance with Germany and Japan. He rightly felt that his presence in the East would help his countrymen in freedom struggle and second phase of his saga began. It is told that he was last seen on land near Keil canal in Germany in the beginning of 1943. A most hazardous journey was undertaken by him under water, covering thousands of miles crossing enemy territories. He was in the Atlantic, the Middle East, Madagascar and the Indian Ocean. At one stage he travelled 400 miles in a rubber dingy to reach a Japanese submarine which took him to Tokyo. He was warmly received in Japan and was declared the head of the Indian army—which consisted of about 40000 soldiers from Singapore and other Eastern regions. Bose called it the Indian National Army (INA) and a government by the name ‘Azad Hind Government’ was declared on 21st October, 1943. INA freed the Andaman and Nicobar islands from the British and was renamed as Swaraj and Shaheed islands.

Bose wanted to free India from the Eastern front. He had taken care that Japanese interference was not present from any angle. Army leadership, administration and communications were managed by Indians only. Subhash Brigade, Azad Brigade and Gandhi Brigade were formed. INA marched through Burma and occupied Cox town on the Indian Border. A touching scene ensued when the soldiers entered their ‘free’ motherland. Some lay down and kissed, some placed pieces of mother Earth on their heads, others wept. They were now inside India and were determined to drive out the British. Delhi Chalo (Let’s march to Delhi) was the war cry. The bombing of Hiroshima and Nagasaki changed the history of mankind. Japan had to surrender. Bose was in Singapore at that time and decided to go to Tokyo for his next course of action. Unfortunately, there was no trace of him from that point. He was just 48 and his death or disappearance is still a mystery. It is believed that he died in a plane crash.