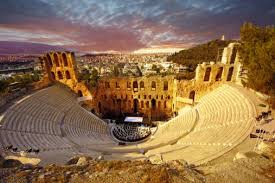 The Ancient Greek civilization was located on today’s Greek land, Ionian Islands, Asia Minor, South Italy, and Sic­ily. It is surrounded by mountains and in the north by water. The Ionian and the Aegean seas, together with natural islands and bays, gave the Greeks the opportunity to develop their maritime commerce and their rich culture. The mountains, which surrounded Greece, gave us the picture of its political character.

From early times, the Greeks lived in independent set­tlements, and they were isolated from one another. Later, these settlements grew up into “poles” or city-states.

The Mediterranean Sea moderates Greeks climate cool­ing air in summer and warmth in winter period. Summers are generally hot and dry, and winters are mild and rainy in coastal regions. In mountain, region winters are stronger.

The Greek civilization has made great contributions in many areas to western society. Greeks scientists made revolutionary discoveries in medicine, mathematics, physics, and astronomy. They also developed the expression of individu­ality. Those are only some reasons why the Greek civilization was and still is one of the most important civilizations in the world.

The protogeometric period is time of economic and cul­tural depression. The depths of this depression occurred from circa 1100 to 1050 BC. This period is also known as the Sub Mycenaean period on the Greek mainland and Minoan period on the island of Crete. Contribution made by the Minoan and Mycenaean Empire to the creation of the Greek civiliza­tion, helped them to develop their own Empire. The use of iron and the cremation of the dead became the greatest progress in Greek civilization. The urns for the ashes are among the most characteristic vessels of that period.

This period, the Geometric period, is well known by many transformations and startling innovation in Greek ar­chitecture and sculpture. The population has increased, and people have moved from the isolated settlements to the city states. The Greeks also moved to the new territories to the east, and to the west. In that, new-concurred territories, the Greeks founded commercial trading posts and colonies. Also in this period, new script was adopted the Semitic alphabeti­cal script, which was encountered through contact with the Phoenicians. The polities formalized, so the need for build­ing temples became popular.

During the Early Archaic period, the concept of polis became very developed. The Greeks continued with colonialization. Locations, such as Cyrene on the North Afri­can cost and Massilia in southern France became Greeks colo­nies. One may say that Greeks suddenly began to launch these overseas projects. The commercial trade between Greece and Egypt, Anatolia and the Levant, developed. Because of these imports from the eastern parts of the world, one could feel the “eastern culture” impact on Greeks architecture and sculp­ture. This period had also the significant impact on Greeks architecture; the first Greek monumental stone sculpture ap­peared, and the Doric and Ionic architectural orders were born.

Even though the most powerful and the most important city states were ruled by tyrants they continued to rise. The Greeks adopted a massive building program, and the Attica region started to dominate in the pottery market for about the whole century. By the beginning of the Archaic period large statues of nudes of males “kuroi” and draped female “kuroi” were produced. In those times, huge temples with cult im­ages were built all around the Greek Empire.

Troubles came from the east ant the west. The Persians wanted to take control over the Greek land, but finally the Persians lost their fight. The Greeks celebration of that vic­tory left many signs in their culture.

By the end of the Persian war, the Classical period started. This was the period when the city of Athens had the greatest political and cultural power principles of democracy estab­lished, the Parthenon was built, and philosophical schools of Socrates and Plato were founded. During the late 5th century BC century, the war between Athens and Sparta took place. After many years of fight, Sparta finally won, and took con­trol over the Greek land. That event destroyed democracy and started to return tyranism.

In the first half of the 4th century BC, another war took place in the Greeks land: the war between Athens, Sparta and Thebes. At the end, peace was finally established when Sparta took overall control, backed by Persia. In the second half of the 4th century BC, Phillip II and his son Alexandar the Great took control over the Greek world. Finally the Classical periods ends at the same time as the Alexandar the Great died in the age of 32 (323BC).

When the Alexandar the Great died (323BC), the land was split into three portions. The first portion was ruled by Antigonid dynasty, and it spread throughout the mainland of the Greece. The Seleucids ruled the second portion, and it consisted of the eastern empire, and the third, the Ptolemies governed the largest portion of the territory the land of an­cient Egypt. In this time the greatest advances were made in terms of engineering, physics, astronomy and mathematics. In Alexandria the great libraries were founded. The old be­liefs in Olimp were influenced by the “Orient” religions and  cultures.

In the 3rd century BC, one could clearly see the rise of the Ancient Rome. Step by step, the Romans took control over almost the whole Greek territories. The city of Corinth was destroyed in 146 BC, Aethens captured in 86 BC, and finally Cleopatra and Mark Anthony defeated at the Battle of Actium in 31 BC. That year is considered as the end of the Ancient Greek Empire, and it was just the beginning of the Great Roman Empire.

The archeologist could only find rare signs of the pri­vate life of the ancient Greece. The only way to figure out what was their private life like were scenes on Black Figure and Red Figure pottery made in Athens during the 6th and 5th century BC.

Very often, the evening meal followed by the special occasions such as symposium. The Symposium is a drinking party organized by the host, and they were normally attended by male guests, but could also include female entertainers and servants. The interior of these drinking parties showed music and revelry. On the exterior, six-party attendant sang and danced.

The Greek women did not have power, political right to vote, and men controlled them. Duties of women who lived in the cities were different of the one who lived in a rural area. The city-woman had to raise the children (desirable male baby), and to run the household. The rural-woman also had to raise children and to do some agriculture work.

The Greek woman had very strictly limited lime outside the house. The exceptions were only some occasions such as weddings, funerals, and religious festivals, where a Greek woman was expected to play prominent public role.

Clothes for women were normally made from available materially wool or flax- and these clothes were made at home. The most commonly clothes were the “chiffon” or tunic and “himation” or cloak.

Men in the ancient Greece were much buster than women. Their primary occupation was politics, arts and crafts, construction, agriculture, manufacturing and trade. At the Greeks vase painting, men’s outdoor life was very good illus­trated. Their primary relaxations were horse riding and hunt­ing.

At first, only the aristocratic boys had a chance to edu­cate themselves. After, in the 4th century BC, all eighteen-year males spent two years in gymnasium. Gymnasium was a state school devoted to overall physical and intellectual development of a young man. More advanced education in phi­losophy, mathematics, logics, and rhetoric was available to the aristocracy in highly selected gymnasium like the acad­emy of Plato and the Lycaeum of Aristotle.