English Proverbs – Fools rush in where angels fear to tread 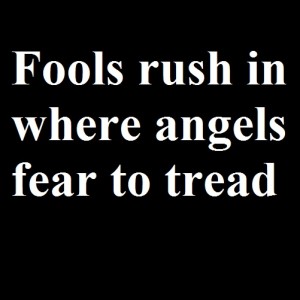 The proverb warns us against hasty and thoughtless action. It is unwise to be hasty. Prudent people are always very careful in their dealings with others. They think twice before they act. They think of the consequences of their actions and will act only if they can succeed. Such people won’t jump to hasty conclusions and so they normally succeed in what they do. But foolish people act hastily without proper thought. They won’t think of the consequences of their actions. They will jump to hasty conclusions and so they fail in their endeavours. When foolish people lose the game by acting hastily, wise men win it by playing it with patience. So it is said that fools enter into critical situations without much thought where even angels fear to go. A person should think twice before he undertakes a project. If he takes any step rashly and recklessly, it can prove to be dangerous. Work done recklessly is not at all profitable. If a small country decides to fight against a big powerful country, the former will surely meet with failure; such a thoughtless decision will destroy that country. When a person decides to start a business, he should think twice. Foolish people always take rash decisions and it is wrong. Such people are led more by their instincts than their thoughts. Thus the proverb cautions us against and reckless acts.