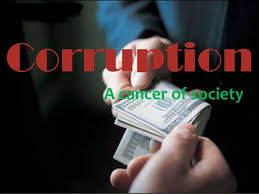 Essay Topics on CAN THE CORRUPTION BE ERADICATED FROM OUR SOCIETY?

CAN THE CORRUPTION BE ERADICATED FROM OUR SOCIETY?

In the present spectrum, an honest man, is like a drop in the ocean) which loses its identity, as soon as it mingles in the salt water of ocean. Corruption has become a common practice, a way of life.

It is a matter of shame, that even after 65 years of independence, the virus of corruption has crept into all walks of life and it can endanger the body politic of our nation.

Political, bureaucratic, corporate and individual corruption in India is major concerns. A 2005 study conducted by Transparency International in India found that more than 55% of Indians had first-hand experience of paying bribes or influence peddling to get jobs done in public offices successfully.

On Transparency International’s latest corruption perception index declared in November 2011, India scored 3.1 on a scale from zero to 10, where anything below five is bad news. “It’s not a good score at all for India,” Rukshana Nanayakkara, acting director of Transparency International’s Asia Pacific Division, said in an interview. Last year, India scored 3.3 India now ranks 95th (In the last survey India stood at 84th rank) in the list – way lower than China, Asia’s other major fast-growing economy, which scored 3.6 points and ranked 75th.

The Transparency International India (TII), in a recent survey, has found that 74% Indians believe that the level of corruption has gone up in the last three years and 55% felt that the Union Government was ineffective to curb the menace.

During the survey of 7500 people, the anti-corruption organization also found out that majority of the respondents believed that politicians and police the two most corrupt institutions in the country, and they have to be bribed to speed up paper work, avoid problems with authorities or simply access basic services.

“More than one in three public service seekers paid bribes. Among the nine services that were covered in the survey, 64% Indians said they bribed police “one reason or the other, 63% paid bribes to land service officials, and 62% paid bribe for registry and permit services. More than 48% perceived political parties; 34.2% said Parliament and the legislature bodies and 40.4% perceived police to be most corrupt,” Transparency International India said in its report, Daily Lives and Corruption: Public Opinion in South Asia.

Corruption today is regarded as a low risk and highly profitable way of earning quick bucks, and whoever is caught, knows how to break free. Our country which is known for moral and ethical values, where spirit of truth if adored, fair means were advocated to attain anything, is now also counted among the top most corrupt nations of the world. From Panch to Prime Minister, from peon to the Chief Secretary’s office all have been found involved and charged for many acts of commissions and omissions.

A peculiar face of corruption in our country goes upstream not downstream and so most of the fundamental policies and decisions about big purchases, contracts, projects etc are distorted at the top level.

The delay in disposing of the cases of corruption is one of the important causes of flourishing of corruption. Corrupt officials even if caught can manage to go scot-free, in due course of time by manipulations or otherwise.

Possessing of vast discretionary powers by the political leaders, and bureaucrats is also one of the important reasons of    being corrupt Discretionary powers in appointments and nominations to various bodies, allotment of petrol pumps, etc, resulted into favouring the kith and kin and other corrupt practices.

Huge election expenses necessarily incurred by the vested interests, whether by the private companies or by the private people to be later regained several fold, with the aid and assistance of such political leaders is a fundamental reason of politicians being corrupt. Politics has become such lucrative business, that once you occupy the chair by hook or by crook, you become rich forever with many perks and facilities throughout the life.

One more reason that can be advanced for corruption is the present inflationary trend, which makes it difficult to maintain an employee’s family. He finds corruption as an attractive proposition.

The taxation system takes away 30% of income of an individual, which renders the person in such a hapless state that he can’t live happily, if he does not fulfill his needs by other means.

The foremost reason for flourishing of corruption is the virtual change in thinking of the people, a total disregard to the moral and ethical values, making the self aggrandizement the sole reason of all activities. Attaining the things, by any means, whether wrong or right, has encouraged generations to adopt the ways of corruption.

The basic question is “Can the corruption be eradicated”? “Nothing is impossible”, it can be said by an enthusiastic social leader but, eradication of corruption is a next to impossible thing in the present spectrum of affairs.                .

When whole of the body’ politic is affected by the virus of corruption, then to eradicate it in toto, is a Herculean task. Corruption is a multifaceted, hydra headed colossus problem, which is required to be dealt with through a multi pronged approach.

The recent phenomenon, the movement against corruption under the leadership of Anna Hazare is a step in the right direction. Anna Hazare is a soldier, lone survivor from his unit in the 1965, Indo-Pak War. Anna dedicated his life to the well being of the society. He is especially recognized for his contribution to the development of Ralegan Siddhi, a village in Parner taluka of Ahmednagar district, Maharashtra and for his efforts for establishing it as a model village. He is a bachelor, with no possessions, no bank balance who lives in a temple. He has fasted on several occasions earlier also when he had succeeded in bringing the corrupt to book.

That won’t be possible because its members will be selected by judges, citizens and authorities through a completely transparent process.

That won’t be possible because the entire functioning of the Lokpal will be     transparent.

It is very strange that this Bill has been pending for over 42 years? The creation of the Lokpal will be a historic event and when the Bill goes through, it will definitely fight corruption and maladministration. But, let us be positive and hope that the government must pass this bill now so that the unbridled corruption can be controlled at the earliest and after some time it would surely be wiped out from our society and the day will come when we shall breathe in corruption free society.

The people and the society can play very important role in fighting the monster of corruption. The general awakening can make the politicians and bureaucrats to use their discretion fairly. The common men must cast their j votes, not on the basis of caste or creed or party, but on the basis of values and I character of the candidates. In a democracy the actual power lies with the voters. The politicians use their caste affiliations, religion, to woo the innocent voters in their favour. The common people must use their votes wisely in favour j of the honest and dedicated candidates.To eradicate corruption from the society all have to fight it. It is the most powerful, most dangerous monstrous evil, which doubles-and trebles itself with the passage of time.