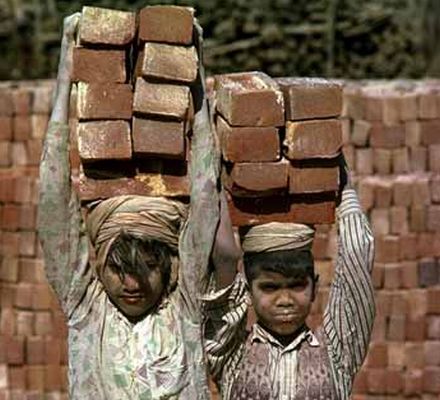 Child labour is one of the challenging problems in India. The practice of engaging young children in various sectors of labour is evident. It is astonishing to note that there is staggering figure between 60 and 115 million working children in India perhaps the highest number in the world. It is poverty that draws a child to earn money to support the needs of his family. Though it is prevalent in most parts of the country, the problem is acute for the socio-economically weaker states like UP, Bihar, Orissa, Jharkhand, Chhattisgarh, Uttarakhand, Madhyapradesh and North-eastern states. Besides poverty, lack of education and accessible sources of credit forces poor parents to engage their children in child labour. India is forced to take up the challenge of providing basic amenities to these children.

It is seen that more than 85 percent of child labour is in the country’s rural areas, working in agricultural activities, such as farming, livestock rearing, forestry and fisheries. Children also develop skills in certain traditional crafts. These children contribute greatly to the national income.

The Government of India is keen to eradicate child labour. India’s unequivocal commitment to the cause of children is well expressed in constitutional provisions, legislations, policies and programmes. The Directive Principle of State Policy and Fundamental Rights reveal the commitment of the Government. Besides, India is also a party to the UN Declaration on the Rights of the child, 1959. India adopted the National Policy on children in 1974. India also ratified on December 2, 1992, the Convention on the Rights of the Child of 1990. This ratification implies that India will ensure wide awareness about issues relating to children. India is also a signatory to the World Development of Children.

Child labour is a great socio-economic problem. Children essentially work to maintain the economic level of households, either in the form of work for wages, or help in household enterprises, or in household chores. In all the activities the basic objective is to provide the family financial support. In some cases, it has been found that a child’s income accounted for between 34 and 37 per cent of the total income of the household.