If there are too many or too much salts in the underground water it may be brackish. One may not relish it. Still it may not be a health hazard. But of late it was found in Denmark that the infants, especially in rural agricultural areas suffered from methaemoglobinaenia. A research found that it was because of excess nitrates in the subsoil water. Further in vivo research revealed that transformation of nitrate and formation of nitroso compounds are responsible for stomach cancer. Further studies conducted by the agency for Environment Protection in Denmark revealed that the overall mean level of nitrate concentration in that country has trebled in the last 35 years or so. According to World Health organization even 10 p.p.m of nitrogen in the form of nitrates makes the water unfit for consumption by infants.

With the results reasons too flew from Denmark to India. Though the Changes in ground water quality are still in a nascent stage the people in European Countries have become cautious about it. A study agricultural scientist of Punjab Agricultural University (PAU) revealed that increased and indiscriminate use of nitrogenous chemical fertilizers has been the cause of the malady. In the region of coarse textured irrigated farm land the nitrate/nitrogen levels have been found more than those prescribed by the WHO. 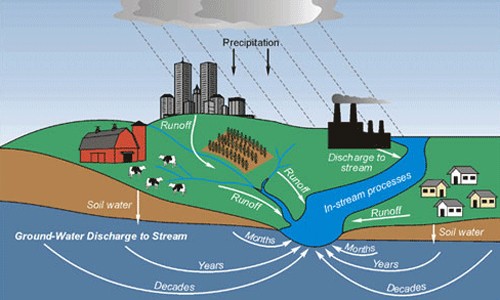 Punjab that supplies almost 50 per cent of the national requirement of wheat in the country has achieved great success in the green revolution during the post independence period. It is partly because of the increased use of chemical fertilizers. The farmers have been feeding with nitrogen to have more yields. The per hectare use of fertilizers in the State in 71-72 was 91.48 kg per hectare. It rose to 120.70 kg in1985-86 and has been increasing since then .Most of this the nitrogen of the fertilizers is absorbed by the root zones. On the one hand the law of diminishing returns applies and the excess use of fertilizers is nullified, on the other the excessive amount of fertilizers enters the ground water in the region. That is how the ground water gets polluted. It is just the beginning. Still it is a matter of great concern for the ecologist. In such circumstances, according to Janne Forslund, a chemical engineer working with the agency for Environment Protection in Denmark,’ widespread changes in ground water quality can be expected in the future.’ The changes are because of high dose of fertilizers that result in contamination.

Since it is just the beginning, the agricultural scientists feel that the ‘polluting context in the ground water can be reduced to acceptable levels with a proper water treatment’. But this is only the curative aspect. It is rather necessary for the farmers to have a consciousness about it. It would rather be advisable to replace chemical fertilizers with the old dung manure. We have to abandon the nuclear plants. It would also be advisable to abandon the excessive use of nitrates in the form of chemical fertilizers. Let us be awake to the legacy that we leave for the coming generations.