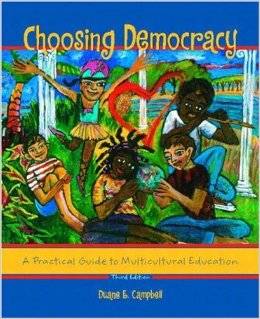 Many Whites in the United States have a strong sense of ethnic identity that is tied to their immigrant ancestors’ country of origin (Italian Americans, Irish Americans, Swedish Americans) or to their experience in this country (New England Yankees, Midwestern Hoosiers, Appalachians, and soon). There are many subgroups within the White experience but… many United States Whites with a strong sense of ethnic identity do not have a strong sense of racial identity. Indeed, many Whites take their Whiteness for granted to the extent that they do not consciously think about it. Never less, their identity as members of the White group in the United States has a profound impact on their lives. “White Racial Identity Development in the United States” by Rita Hardiman in Race, Ethnicity, and Self: Identity in Multicultural Perspective, edited by Elizabeth Pathy Salett and Diane R. Koslow (Washington, DC: NMCI Publications, 1994).

Among the challenges that face all Americans is to explore race and to educate their children about its impact in society. America is the “melting pot” of society and the most diverse nation in the world. Making it seem from the media that flashes pictures upon our retinas almost every day. In re­ality, we live our lives in increasingly homogenized commu­nities composed of single races. Many people never learn or are taught the difference that divide and bring us together. There needs to be a change in the way history is shown to children in America, including whom is a part of it and how it is taught. We need to create an environment that promotes a geographically based multicultural education.

In school our children have been historically educated and taught history, epitomized by the glorification, or at least passing reference to Christopher Columbus’ atrocities in the Americas. There is no conspiracy to neglect others views and the hardships of history. Rather the European dominance that forms the basis for the general American culture manifests itself in skewed views of history. The dominate societal seg­ment always writes the text, but the problem now is that, white America, no longer controls the culture as much as it did. As other populations of people grow, their side of history is added to the texts.

This change in education started back in the thirties as “white” students examined their cultural heritage. As the non-Anglo Saxon population of whites came into power and po­sition, they also wanted their heritages to be explained and glorified. Increasing numbers of immigrants from all over, the world began to inundate the country as the world wars began and ended. Strong economics and progressive social steps caused the people of the world to move to the United States. With the white wash of the fifties and the breakthrough of the Sixties, people started to question the educational sys­tem of America and its unnerving emphasis on western cul­ture.

More people are continuously coming from countries that are not European. Therefore, the landscape of America begins to change even more dramatically. Now pockets of Russians, Chinese, Japanese, Sudanese, etc. pop up in every city. Of course, the media hops on the bandwagon of this change and wherever possible, interjecting buzz words like “multiculturalism” and “melting pot.” The media has taken control of these and other words, rewriting and diluting their definitions. It is inevitable that concepts such as these lose their value by the media because the media is one of the longest standing institutions of white dominance.

By the eighties people debated these words by reshap­ing American education. Schools were required to give a more rounded education and begin to force students to read books written by someone besides a white male. Now some real progress has been achieved but the logistics of the situation are not answered that easily. How do you choose who is taught? How do you teach it? What about the constraints of time?

These are very delicate and complicated question, which are not easily answered. Many schools use the method of teaching cultural makeup of the classroom community. For example if the majority of your classroom is in California it would be intelligent to teach about the European, Spanish Mexican and Native American side of the history of Califor­nia. While if the classroom were in Louisiana you would have to include Spanish, French, Native American, European, Af­rican, American Black, and various other cultures would be included in the classroom. By giving the connection of your own geographical area and the people that have helped shaped it, students will absorb the information much more readily and the integration of the community is furthered by bringing various groups into a shared cultural history.

The white dominated areas also need to have their defi­nitions of their community and culture expanded. Though means of looking at the “truth” of their cultural heritages atrocities and gains.

Teaching this kind of education is definitely a daunting task for the school boards. There will always be bias brought about by the society, the media, and family. Each of these factors contributes in different ways and to differing degrees depending on each student. There are no perfect students who are already open to all of the ideas of multicultural education. They would need to be shown in a unique way to open their mind. While some learn of other cultures through travel, for many (the young and underprivileged especially) this is an impossible task. For barring the opportunity to immerse stu­dents in other cultures, education is the only way to facilitate cross-cultural understanding and respect. The problem then arises no matter how much a subject has been taught, it will not be learned until the student is willing and able. This is why geographically based multicultural education is so important. It makes the concepts personal and relevant to the students, thereby facilitating their acceptance.

We do not think of ourselves as human, but as white, black, Californians, New Yorkers, Europeans, Western countries, and industrialized. It is programmed into our subcon­scious to sort our world into categories. Until the only cat­egory of people society sees is simply “human,” we will never achieve a sustained and real peace even simply within our own society. The vehicle for bringing about that point of view is the effort to use education to bring people together.