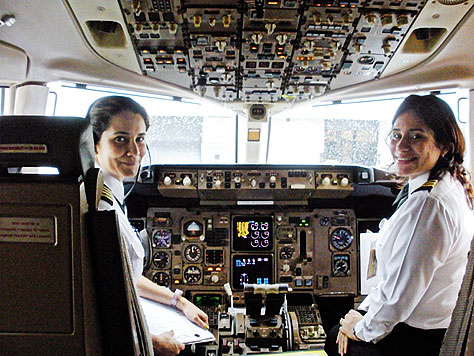 WOMEN IN THE COCKPIT

The last time you boarded a plane, did you hear a wom­an’s voice over the PA system telling you to sit back and en­joy the flight? That wasn’t a one-off, for; more and more women are making the leap from the cabin to the cockpit. They are flying solo, they are flying as captains and they are flying with all-woman crews. The flight from Prem Mathur, the first Indian woman to become a commercial pilot more than 50 years ago, to the youngest commercial pilot, 18-year-old Japji Kaur Cheema, has been a long one but women are finally chasing their lofty dreams.

Driving this increase in the number of women pilots is a buoyant aviation market. Little wonder that Chandigarh gal Japji, all of 18, had more than three offers before she opted for SpiceJet. It’s also become exciting and lucrative career choice for youngsters looking to spread their wings.

At the Sabena Airline Training Center in the US, three girls from diverse backgrounds have finished their first so­los. Tanvitha, a 21-year-old from Bangalore is a BE in me­chanical engineering. Shiv Priya Kapur, 23, has abandoned boring hotel management for her thrilling new career while Kanika Mehra, an electrical engineering graduate from Pun­jab Engineering College, Chandigarh, is realizing a childhood dream to fly with parental approval.

Once their training — sponsored by SpiceJet is over — they’ll join the growing ranks of professional women pilots in the country.

It’s a far cry from the days when Indra Mittra started flying in the eighties. “Those days there used to be just a handful of women pilots and now I often fly with all-woman crews on the BangaloreChennai route,” says Air Deccan’s Mittra, who is one of the rare women to have made it to the rank of base captain. Handling both her managerial and operations tasks with equal ease, Mittra says today its only performance that counts in the pilot’s seat.

So does she inform passengers when they’re flying with an all woman crew? “Always, but only after we have landed,” she says, with a smile. She even recalls an incident two years ago while landing an Airbus 320 at Chennai airport.

“My crew comprised only women, the air traffic con­troller who gave us permission to land was a woman and a flight that took off just after we landed had a woman pilot. When I brought this to the notice of the passengers through the PA, all of the passengers stood up and applauded us.”

That the doors of the cockpit are opening to the fairer sex is vouched for by flying schools. Captain Mamta, who runs Fly Tech Aviation in Hyderabad, says the intake of women trainees has increased by 10-12% in the last two years. Recalling her own days as a student, she says, “From one or two women in a batch of 100 students, it’s now around 10 or 12.” The ratio could improve further, she feels. However there are still hurdles that women have to face. “The training is expensive and there are still parents who don’t want to fork out that much money for a daughter,” says Mamta.

But so far neither the passengers, nor the airlines, seem to have shown any reservations about introducing women into the cockpit. Indian has 76 women pilots, and the number is rising with every new batch. Forty of Air Deccan’s 496 pilots are women, says Pratyasha Singh, the airline’s corporate communications officer.

Even the crew shuttle buses at its Chennai base are driven by women. Kingfisher, which has 26 women from a total of 390 pilots, got its first woman captain just recently. “Flying has now become a much sought-after career for women. With each new batch of recruits, we are adding more and more women pilots,” says Rubi Arya, executive vice-president of Kingfisher Airlines.

Not even the huge training costs are deterring aspirants. Says Lubna Kadri, who is currently recruiting students in Mumbai for her flying academy based in the UAE, “The re­sponse from women has been overwhelming. Already; 30% of the students who have enrolled with us for the July batch, are women.”

And with so much interest in aviation, how come women have not yet ventured into another uncharted territory — flying helicopters?

“Choppers have attracted few women as compared to fixed wing aircrafts because they are riskier and the pay isn’t as lucrative,” explains D A Yadav; public relations manager of Pawan Hans. But the winds of change are blowing here as well. After a gap of many years, the company is now getting ready to welcome its first woman pilot into the fold.

For those keen to travel beyond the stars, planet earth offers more than enough career opportunities.