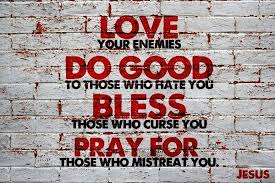 Jesus said, “You have heard that it was said,’ an eye for an eye a tooth for a tooth.” Now I tell you: do not take re­venge on someone who wrongs you. If anyone slaps you on the right cheek, let them slap your left cheek too… love your enemies and pray for those who persecute you.”

Is it possible to follow this teaching of Jesus today? The answer is yes, conveying this teaching is possible. There are still some people who do live in this way.

One person who lived this way was Mohandas Gandhi. Gandhi was a man of peace from India. By no means did Gandhi resort to violence. Gandhi showed that the powerless had power. He never fought back; instead, he would sit and pray. Gandhi always wanted equality and peace among eve­ryone. If someone were harm in any way, he would have never turned and hurt them. He would have prayed or just ambled away. Although with his courageous words and actions, he was a very powerful person he still could not control the de­cisions and actions of others. Gandhi once said, “I have no strength, save what God gives me. I have no authority over my country men, save the purely moral.” Like many of our brave and peaceful leaders, Gandhi was also assassinated. He died on January 30, 1948. Everyone should be more like Gan­dhi. Everyone should be kind and peaceful and then the world may be an easier place to live in.

It is not an easy way to live because you often act or even speak before you act. Several people often do things without thinking. It is human nature. For example if person ‘A’ were to clout person ‘B’, person ‘B’ would automatically strike back. This is unquestionably not, what Jesus would do. There is only very few people who would actually just turn the other cheek or walk away. However, everyone else would probably do the same or even worse than what the other per­son did.

Another way we can follow this philosophy is by, as Je­sus said, “Do unto others as you would have done unto you.” Think about this, no one would want someone to harm them, emotionally or physically, and the other person probably feels the same way.

Verbal abuse, talking about others, judging others also part of this. This damages others, and it’s hard not to do this because everybody does it but just because everybody does doesn’t make it right. Most people follow what the populace is doing because usually if they don’t they are part of ridicule. It is .easier to follow the things that others do than to go in your own path and many people will treat others badly and the ones being treated badly will usually fight back by doing the same way or by even just making the person the object of mockery. Some people just let their anger and fury get to them and then they end up doing something that they may end up re­gretting in the end. They try to get revenge and sometimes look at things from a different point-of-view. They see how it would be like if they were the ones being laughed at and be­ing hurt. They end up feeling horrible about what they did in the end.