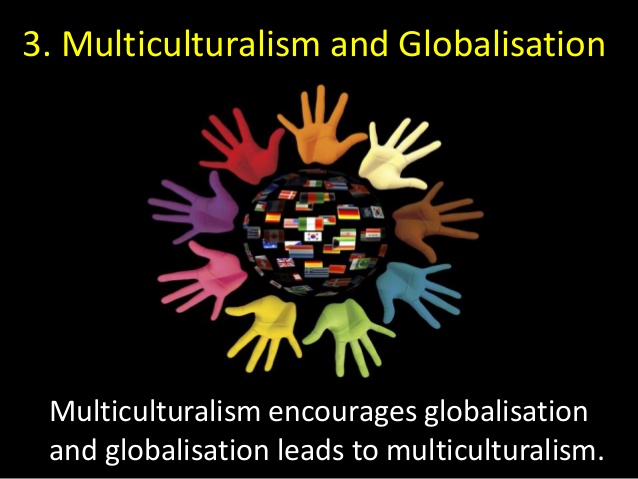 As the technology has progressed, the world has seen diminishing boundaries and coming together of peoples of different psycho-social makeup. Sometimes, they intermix with each other while maintaining their own cultures while at other times they may not like each other at all quite often it has been the case that a new culture is born out of the intermingling cultures. For instance, as Indian and Persian culture came in touch, a new Urdu culture was born.

There is criticism in UK, Germany and elsewhere in Europe of multiculturalism. Critics say that it failed and the proof is extremism, London rids and Oslo killings. In July 2011, a 32 year old Norwegian Anders Breivik indiscriminately shot at civilians and killed many people. His was an act of intolerance and right wing extremism that stemmed from the migration of Muslims to Europe. Such incidents have done a lot to strengthen the belief that multiculturalism brought by globalization is unworkable in times of recession when opportunities dwindle and there are socio-economic and psychological pressures. Multiculturalism has even been questioned by some of Europe’s leaders like Devid Cameron and Tugela Merkel. The danger is that such statements may encourage age extremism.

Societies have been changing fast and there is mounting fenestration among civilians that governments and officials do not listen to their demands. This frustration sometimes leads to growing popularization of regional and factional political parties with extremist propaganda with globalization, national identity seems to become more important. The nation state stubbornly remains the focus of most people’s identity. Multiculturalism is sometimes taken to mean that different cultural communities should live their own ways in a self-contained manner. Extremist groups try to force such views on people.

Multiculturalism, in reality, insists that no culture is perfect or represents the best life and therefore it can always benefit from a critical dialogue with other cultures. India is a shining example of multiculturalism where cultures have coexisted from centuries and have mutually enriched themselves. It is thus, fittingly said to be the land of ‘Unity in Diversity’. But we cannot have a healthy diversity without tackling inequalities. It is these inequalities in the society which lead to frustration and this gets manifested in the form of intolerance and prejudices in the minds of people. In the time of recession when many Europeans lost jobs, unemployment became a huge stressor. When they saw a few people of other nationalities live Blacks or Asians, prospering in their countries, this stress became manifested in the form of prejudice against foreigners. Though such beliefs are thoroughly unfounded as they tend to ignore many other suffering foreigners and prospering nationals and also lack any logic or rationality.

Multiculturalism has always brought in newer ideas and healthy changes in ailing societies. Change is always a bit difficulty so people tend to resist it. But it is necessary for a culture to develop. It brings innovations and leads to advancements. It is the technology advancement only which has led to diminishing barriers and thus, globalization. And globalization further brings cultures together and fosters multiculturalism. Thus, it is a never ending cycle of events which will keep nations developing and cultures getting closer.

Only some of the tribal cultures have succeeded in remaining isolated in the world but at the same time, there growth stories are also not encouraging. The countries which have chosen not to adopt globalization in order to preserve their own culture have also been left far behind. The social evils like Sati, Dowry, and Casteism could become issues only when our culture came in contacts with modern western cultures. Also, there has been sharing of things like various food delicacies, new styles of clothing, concepts of partying and get-together, new forms of entertainment etc. Even in the workplace multiculturalism is a welcome thing. Different skills and attitudes bring diversity which adds to quality of work. The emancipation of women has been possible and possible only if cultures interact and view each other closely.

Multiculturalism does not divide nations. Neither is it the canes of ghettoisation, ghettoes and slums have existed for centuries and segregation among different ethnic groups has existed before the time of multicultural polities. Multiculturalism is, infect, a reaction against racism and seeing people in terms of their ethnic backgrounds. It is an inclusive philosophy. Its potential for integrating new cowers and minorities into society is undermined by false notions of its tendency to produce separatism and poverty.

Multiculturalism is a valuable tool, it stimulates society members to appreciate diversities and celebrate the differences among individuals. Each element of diversity provides for and adds a unique and essential component to benefit society at large.

Multiculturalism is to be seen as a fairer system that allows people to truly express who they are within a society, that is more tolerant and that adapts better to social issues. Culture is not one definable thing based on one race or religion, but rather the result of multiple is a need to balance protection of cultural values, protection of minority rights and changing ideologies to let multiculturalism thrive in full essence.