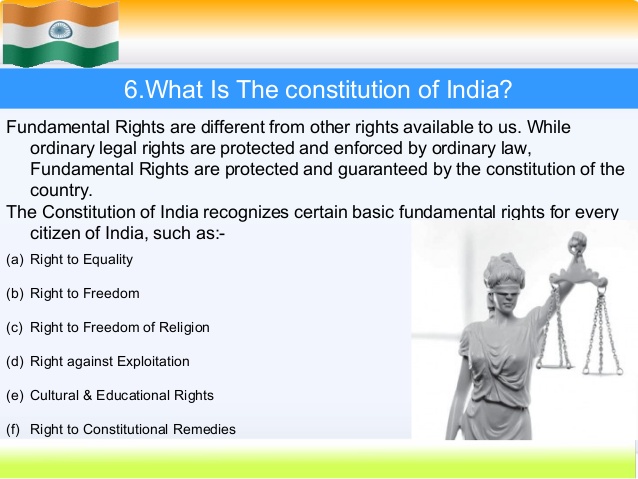 Our Constitution guarantees Fundamental Rights to the citizens which are to be looked upon as inalienable rights of an individual, which every human being is entitled to enjoy if he is to maintain his dignity and self-respect. These are basic rights essential for the realization of the highest good of a citizen. Any violation of these rights can be questioned in a court of law. These are in the form of basic and essential freedoms which every citizen enjoys individually and collectively. These are guaranteed in the form of six broad categories of “Fundamental Rights”, under Articles 12 to 35 of our Constitution. These are

Right to Freedom of Religion

Article 12 mentions the authorities against which Fundamental Rights are available. Article 13 lies dawn that any law passed by a legislature or a law already in existence, if inconsistent with the guarantee of Fundamental Rights will be void.

Article 12 in this part, unless the context otherwise requires, “the State” includes the Government and Parliament of India and Government and the Legislature of each of the States and all local or other authorities within the territory of India.

Article 13 (1) All laws in force in the territory of India immediately before the commencement of this Constitution, in so far as they are inconsistent with  the provisions of this part, to the extent of such inconsistency, be void. (2) The state shall not make any law which takes away or abridges the rights conferred by this part and any law made in contravention of this clause shall, to the extent of contravention, be void. (3) In this Article, unless the context otherwise requires—

Ever since its adoption, the chapter on Fundamental Rights in the Constitution has been under criticism, both in India and outside. The critics argued that some important rights such as right to work, right to education etc were not included under this chapter. It was also pointed out that the spirit of the whole chapter was spoiled by taking away much of the freedoms or rights provided through the insertion of many preventive provisions such as preventive detention, suspension of the right to constitutional remedies etc. It was alleged that what has been given under one head was taken away by inserting provisions under another head. Some critics also alleged that the Fundamental Rights are couched in such legal language that it is not easily understood. They asserted that the provisions of most of the Fundamental Rights are hedged in with so many exceptions, explanations and qualifications that it becomes very difficult to understand what exactly is available to an individual.

But, whatever is argued by the critics in respect to the Fundamental Rights, provided under the Constitution does not hold much, if we could imagine the circumstances and the situation of the country in 1950, when the Constitution came into force. Right to education, Right to work, etc were not included in the chapter of Fundamental Rights. As we know, these rights are enforceable in the court of law. If we analyze the economic conditions that prevailed at that time we could well realize that it was impossible to provide work and education to every citizen at that point of time. So far the provisions in respect of preventive detention and suspension of constitutional remedies are concerned these were necessary for the existence and safety of the republic as envisaged by the makers of the Constitution. Against the criticism of form of language, it is well justified that simple language is not by itself a virtue and in general legal documents are couched in a language in order to make the things crystal clear from legal point of view. Since then the laws relating to the right to Work, Right to Information and Right to education have also been incorporated, in a way, to enhance the spirit of Fundamental Rights.

The very purpose of guaranteeing the Fundamental Rights was to keep them beyond the reach of absolute majority of legislature and officials in government, and to establish them lawful principles to be applied by the courts. The constitutional framers well envisaged the danger of a despotic ruler coming into power with absolute majority and so the Fundamental Rights were kept out of the purview of the legislature to a great extent and the courts were given the powers to safeguard these basic rights.

The concept of Fundamental Rights limits the power of the government and prevents the executive and the legislature from becoming authoritative or dictatorial and also it provides an opportunity for the individual for self development. Constitutions that didn’t contain such provisions have resulted into dictatorial rule. Hence, the philosophy and concept underlying the Fundamental Rights is that constitutional limitation on the power of the government are the only way of ensuring and safe-guarding the basic human freedoms and so the dignity and self-respect for the individuals. The success or failure of a democracy depends largely on the extent to which civil liberties and basic rights are enjoyed by the citizens. A democracy must aim at the highest development of the individual. Only a free society wherein individuals feel dignified, enjoy basic rights can assure the all round and quick progress of its members and thus of the nation itself. Herein lays the importance of Fundamental Right