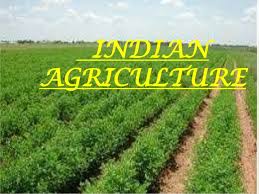 Agriculture and allied sectors like forestry and fisheries accounted for 16.6% of the GDP in 2009, about 50% of the total workforce. The economic contribution of agriculture to India’s GDP is steadily declining with the country’s broad-based economic growth. Still, agriculture is demographically the broadest economic sector and plays a significant role in the overall socio-economic fabric of India.

In fiscal year ending June 2011, with a normal monsoon season, Indian agriculture accomplished an all time record production of 85.9 million tons of wheat, a 6.3% increase from a year earlier. Rice output in India also hit a new record at 95.3 million tones, a 7% increase from the year earlier. Lentils and many other food staples production also increased year over year. Indian farmers thus produced about 71 kilogram of wheat and 80 kilogram of rice for every member of Indian population in 2011. The per capita supply of rice every year in India is now higher than the per capita consumption of rice every year in Japan.

India exported about 2 billion kilogram each of wheat and rice in 2011 to Africa, Nepal, Bangladesh and other regions of the world.

Aquaculture and catch fishery is amongst the fastest growing industries in India. Between 1990 and 2010, Indian fish capture harvest doubled, while aquaculture harvest tripled. In 2008, India was the world’s sixth largest producer of marine and freshwater capture fisheries, and the second largest aquaculture farmed fish producer. India exported 600000 metric tons of fish products to nearly half of all the world’s countries.

Over 50 years since its independence, India has made immense progress towards food security. Indian population has tripled, but food grain production more than quadrupled thus there has been substantial increase in available food grain per capita.

Prior to the mid-1960s, India relied on imports and food aid to meet domestic requirements. However, two years of severe drought in 1965 and 1966 convinced India to reform its agricultural policy, and that India could not rely on foreign aid and foreign imports for food security. India adopted significant policy reforms focused on the goal of food grain self-sufficiency. This ushered in India’s Green Revolution, which began with the decision to adopt superior yielding, disease resistant wheat varieties in combination with better farming knowledge to improve productivity. The Indian state of Punjab led India’s Green Revolution and earned itself the distinction of being the country’s bread basket. The initial increase in production was centered on the irrigated areas of the Indian states of Punjab, Haryana and Western Uttar Pradesh. With both the farmers and the government officials focusing on farm productivity and knowledge transfer, India’s total food grain production soared. A hectare of Indian wheat farms that produced an average of 0.8 ton in 1948 produced 4.7 tons of wheat in 1975 from the same land. Such rapid growth in farm productivity enabled India to become self-sufficient by the 1970s. It also empowered the smallholder farmers to seek further means to increase food staples produced per hectare. By 2000, Indian farms were adopting wheat varieties capable of yielding 6 tons of wheat per hectare.

With agricultural policy success in wheat, India’s Green Revolution technology spread to rice. However, since irrigation infrastructure was very poor, Indian farmers innovated with tube-wells, to harvest ground water. When gains from the new technology reached their limits in the states of initial adoption, the technology spread in the 1970s and 1980s to the states of Eastern India—Bihar, Odisha and Paschim Banga. The lasting benefits of the improved seeds and new technology extended principally to the irrigated areas which account for about one-third of the harvested crop area. In the 1980s, Indian agriculture policy shifted to ‘evolution of a production pattern in line with the demand pattern’ leading to a shift in emphasis to other agricultural commodities like oilseed, fruit and vegetables. Farmers began adopting improved methods and technologies in dairying, fisheries and livestock, and meeting the diversified food needs of India’s growing population. As with rice, the lasting benefits of improved seeds and improved farming technologies now largely depends on whether, India develops infrastructure such as irrigation network, flood control systems, reliable electricity production capacity, all season rural and urban highways, cold storage to prevent food spoilage, modern retail, and competitive buyers of produce from the Indian farmers. This is increasingly the focus of Indian Agriculture Policy.

According to a 2007 EU report, in the 1990s and early 2000s, Indian Agriculture Policy aimed to improve food self-sufficiency and alleviate hunger through food distribution. Aside from investing in infrastructure, the government supports agriculture through Minimum Support Prices (MSP) for the major agricultural crops, farm input subsidies and preferential credit schemes. Under the price support policy, MSPs are set annually for basic staples to protect producers from sharp price falls, to stabilize prices and to ensure adequate food stocks for public distribution. MSPs have been below the prevailing market prices. Indian Government has also deployed subsidies on farm inputs including fertilizers, electrical power and irrigation water. These subsidies have led to inefficient use of these farm inputs.

As of 2011, India had a large and diverse agricultural sector, accounting, on average, for about 16% of GDP and 10% of export earnings. India’s arable land area of 159.7 million hectares (394.6 million acres) is the second largest in the world, after the United States. Its gross irrigated crop area of 82.6 million hectares (215.6 million acres) is the largest in the world. India has grown to become among the top three global producers of a broad range of crops, including wheat, rice, pulses, cotton, peanuts, fruits, and vegetables. Worldwide, as of 2011, India had the largest herds of buffalo and cattle, is the largest producer of milk, and has one of the largest and fastest growing poultry industries.

The following table presents the twenty most important agricultural produce in India, by economic value, in 2009. Included in the table is the average productivity of India’s farms for each produce. For context and comparison, included is the average of the most productive farms in the world and name of country where the most productive farms existed in 2010. The table suggests India has large potential for further accomplishments from productivity increases, in increased agricultural output and agricultural incomes.

The Statistics Office of the Food and Agriculture Organization reported that, per final numbers for 2009, India had grown to become the world’s largest producer of the following agricultural produce.

In 2009, India was the world’s third largest producer of eggs, oranges, coconuts, tomatoes, peas and beans.

In addition to growth in total output, agriculture in India has shown an increase in average agricultural output per hectare in last 60 years. The table below presents average farm productivity in India over three farming years for some crops. Improving road and power generation infrastructure, knowledge gains and reforms has allowed India to increase farm productivity 40% to 500% over 40 years. India’s recent accomplishments in crop yields while being impressive, are still just 30% to 60% of the best crop yields achievable in the farms of developed as well as other developing countries. Additionally, despite these gains in farm productivity, losses after harvest due to poor infrastructure and unorganized retail cause India to experience some of the highest food losses in the world.

“Slow agricultural growth is a concern for policy-makers as some two-thirds of India’s people depend on rural employment for a living. Current agricultural practices are neither economically nor environmentally sustainable and India’s yields for many agricultural commodities are low. Poorly maintained irrigation systems and almost universal lack of good extension services are among the factors responsible. Farmers access to markets is hampered by poor roads, rudimentary market infrastructure, and excessive regulation.”

“With a population of just over 1.2 billion, India is the world’s largest democracy. In the past decade, the country has witnessed accelerated economic growth, emerged as a global player with the world’s fourth largest economy in purchasing power parity terms, and made progress towards achieving most of the Millennium Development Goals. India’s integration into the global economy has been accompanied by impressive economic growth that has brought significant economic and social benefits to the country. Nevertheless, disparities in income and human development are on the rise. Preliminary estimates suggest that in 2009-10 the combined all India poverty rate was 32% compared to 37% in 2004-05. Going forward, it will be essential for India to build a productive, competitive, and diversified agricultural sector and facilitate rural, non-farm entrepreneurship and employment. Encouraging policies that promote competition in agricultural marketing will ensure that farmers receive better prices.”

Even though, India has shown remarkable progress in recent years and has attained self sufficiency in food staples, the productivity of Indian farms for the same crop is very low compared to farms in Brazil, the United States, France and other nations. Indian wheat farms, e.g., produce about a third of wheat per hectare per year in contrast with wheat farms in France. Similarly, at 44 million hectare, India had the largest farm area under rice production in 2009; yet, the rice farm productivity in India was less than half the rice farm productivity in China. Other food staples productivity in India is similarly low, suggesting a major opportunity for growth and future agricultural prosperity potential in India. Indian total factor productivity growth remains below 2% per annum; in contrast, China has shown total factor productivity growths of about 6% per annum, even though China too has smallholding farmers, If India could adopt technologies and improve its infrastructure, several studies suggest India could eradicate hunger and malnutrition within India, and be a major source of food for the world.

Crop yields for some farms within India are within 90% of the best achieved yields by farms in developed countries such as the United States and in European Union. No single state of India is best in every crop. Indian states such as Tamil Nadu achieves highest yields in rice and sugarcane, Punjab enjoys the highest yields in wheat and coarse grains, Karnataka does well in cotton, Bihar does well in pulses, while other states do well in horticulture, aquaculture, flower and fruit plantations. These differences in agricultural productivity within India are a function of local infrastructure, soil quality micro-climates, local resources, farmer knowledge and innovations. However, one of the serious problems in India is the lack of rural road network, storage,

logistics network, and efficient retail to allow free flow of farm produce from most productive but distant Indian farms to Indian consumers, Indian retail system is highly inefficient. Movement of agricultural produce within India is heavily and overly regulated, with inter-state and even inter-district restrictions on marketing and movement of agricultural goods. The talented and efficient farms are currently unable to focus on the crops they can produce with high yields and at lowest costs.

The required level of investment for the development of marketing, storage and cold storage infrastructure is estimated to be huge. The government has not been able to implement various schemes to raise investment in marketing infrastructure. Among these schemes are Construction of Rural Go Downs, Market Research and Information Network, and Development / Strengthening, of Agricultural Marketing Infrastructure, Grading and Standardization.

Recently, Government of India has set up Farmers Commission to completely evaluate the agriculture programme. However, the recommendations have had a mixed reception.

In November 2011, India announced major reforms in organized retail. These reforms would include logistics and retail of agricultural produce. The reform announcement led to major political controversy. The reforms were placed on hold by the Indian Government in December 2011.