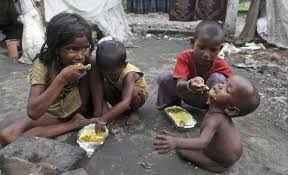 Poverty is widespread in India, with the nation estimated to have a third of the world’s poor. According to a 2005 World Bank estimate, 41.6% of the total Indian population falls below the international poverty line of US $ 1.25 a day. A recent report by the Oxford Poverty and Human Development Initiative states that 8 Indian states have more poor than 26 poorest African nations combined which totals to more than 410 million poor in the poorest African countries. According to a new UN Millennium Development Goals Report, as many as 320 million people in India and China are expected to come out of extreme poverty in the next four years, while India’s poverty rate is projected to drop to 22% in 2015. The report also indicates that in India, the poverty rate is projected to fall from 51% in 1990 to about 22% in 2015, is on track to cut poverty in half by the 2015 target date.

The 2011, Global Hunger Index (GHI) Report ranked India 15th, amongst leading countries with hunger situation. It also places India amongst the three countries where the GHI between 1996 and 2011 went up from 22.9 to 23.7, while 78 out of the 81 developing countries studied, including Pakistan, Nepal, Bangladesh, Vietnam, Kenya, Nigeria, Myanmar, Uganda, Zimbabwe and Malawi succeeded in improving hunger condition.

There has been no uniform measure of poverty in India. The Planning Commission of India has accepted the Tendulkar Committee report which says that 37% of people in India live below the poverty line. The Arjun Sengupta Report (from National Commission for Enterprises in the Unorganized Sector) states that 77% of Indians live on less than rupees 20 a day (about $ 0.50 per day). The NC Saxena Committee report states that 50% of Indians live below the poverty line.

A study by the Oxford Poverty and Human Development Initiative using a Multi-dimensional Poverty Index (MPI) found that there were 645 million poor living under the MPI in India, 421 million of whom are concentrated in eight North Indian and East Indian States of Bihar, Chhattisgarh, Jharkhand, Madhya Pradesh, Odisha, Rajasthan, Uttar Pradesh and Paschim Banga. This number is higher than the 410 million poor living in the 26 poorest African nations.

Estimates by NCAER (National Council of Applied Economic Research) show that 48% of the Indian households earn more than Rs.90000 annually. According to NCAER, in 2009, of the 222 million households in India, the absolutely poor households (annual incomes below 45000) accounted for only 15.6% of them. Another 80 million households are in income levels of 45000-90000 per year. These numbers also are more or less in line with the latest World Bank estimates of the below the poverty line households that may total about 100 million.

The Government of India have initiated several programmes to alleviate poverty, including subsidizing food and other necessities, increased access to loans, improving agricultural techniques and price supports, and promoting education and family planning since independence. These measures have helped eliminate famines, cut absolute poverty levels by more than half and reduced illiteracy and malnutrition to a certain extent.

Although, the Indian Economy has grown steadily over the last two decades, its growth has been uneven when comparing different social groups, economic groups’ geographic regions and rural and urban areas. Between 1999 and 2008, the annualized growth rates for Gujarat (8.8%), Haryana (8.7%) or Delhi (7.4%) were much higher than for Bihar (5.1%), Uttar Pradesh (4.4%), or Madhya Pradesh (3.5%). Poverty rates in rural Odisha (43%) and rural Bihar (41%) are among the world’s most extreme.

According to a recently released World Bank Report, India is on track to meet its poverty reduction goals. However by 2015, an estimated 53 million people will still live in extreme poverty and 23.6% of the population will still live under US $ 1.25 per day. This number is expected to reduce to 20.3% or 268 million people by 2020. However, at the same time, the effects of the worldwide recession in 2009, have plunged 100 million more Indians into poverty than there were in 2004, increasing the effective poverty rate from 27.5% to 37.2%.

The main causes of poverty are illiteracy, population growth rate by far exceeding the economic growth rate for the better part of the past 60 years, protectionist policies pursued since 1947 to 1991, which prevented large amounts of foreign investment coming to our country.

In India, it is estimated that about 350-400 million are below the poverty line, 75% of them in the rural areas. More than 40% of the population is illiterate, with women, tribal and scheduled castes particularly affected.

Over-reliance on agriculture is also a cause of poverty in India. There is a surplus of labour in agriculture. Farmers are a large vote bank and use their votes to resist reallocation of land for higher-income industrial projects. While services and industry have grown at double digit figures, agriculture growth rate has dropped from 4.8% to 2%. About 60% of the population depends on agriculture whereas the contribution of agriculture to the GDP is about 18%.

Also, the License Raj has caused slow progress and increase in poverty in India. Licence Raj refers to the elaborate licenses, regulations and the accompanying red tape that were required to set up and run business in India. The License Raj was a result of India’s decision to have a planned economy, where all aspects of the economy are controlled by the state and licenses were given to a select few. Corruption flourished under this system.

Other points of view hold that the economic reforms initiated in the early 1990s are responsible for the collapse of rural economies. The level of inequality has risen to extraordinary levels, when at the same time, hunger in India has reached its highest level in decades. The human cost of the ‘liberalization’ has been very high. The huge wave of farm suicides in Indian rural population from 1997 to 2007, totaled close to 200000, according to official statistics. Professor Utsa Patnaik, India’s top economist on agriculture, has pointed out, the average poor family in 2007, has about 100 kg less food per year than it did in 1997.

Despite all the causes, India currently adds 40 million people to its middle class every year. Analysts such as the founder of Forecasting International, Marvin J Cetron writes that an estimated 300 million Indians now belong to the middle class; one-third of them have emerged from poverty in the last ten years. At the current rate of growth, a majority of Indians will be middle-class by 2025.

Eradication of poverty in India is generally only considered to be a long-term goal. Poverty alleviation is expected to make better progress in the next 50 years than in the past, as a trickle-down effect of the growing middle class. Increasing stress on education, reservation of seats in Government jobs and the increasing empowerment of women and the economically weaker sections of society, are also expected to contribute to the alleviation of poverty. It is incorrect to say that all poverty reduction programmes have failed. The growth of the middle class (which was virtually non-existent when India became a free nation in August 1947) indicates that economic prosperity has indeed been very impressive in India, but the distribution of wealth is not at all even.

A study by the McKinsey Global Institute found that in 1985, 93% of the Indian population lived on a household income of less than rupees 90000 a year, or about a dollar per person per day, by 2005, that proportion had been cut nearly in half, to 54%. More than 103 million people have moved out of desperate poverty in the course of one generation in urban and rural areas as well. They project that if India can achieve 7.3% annual growth over the next 20 years, 465 million more people will be lifted out of poverty. Contrary to popular perceptions, rural India has benefitted from this growth as extreme rural poverty has declined from 94% in 1985 to 61% in 2005, and they project that it will drop to 26% by 2025. We can’t question the sincerity of the efforts put by the Government, yet the prevailing corruption and high handedness of the bureaucracy must be checked to eradicate poverty in our country.