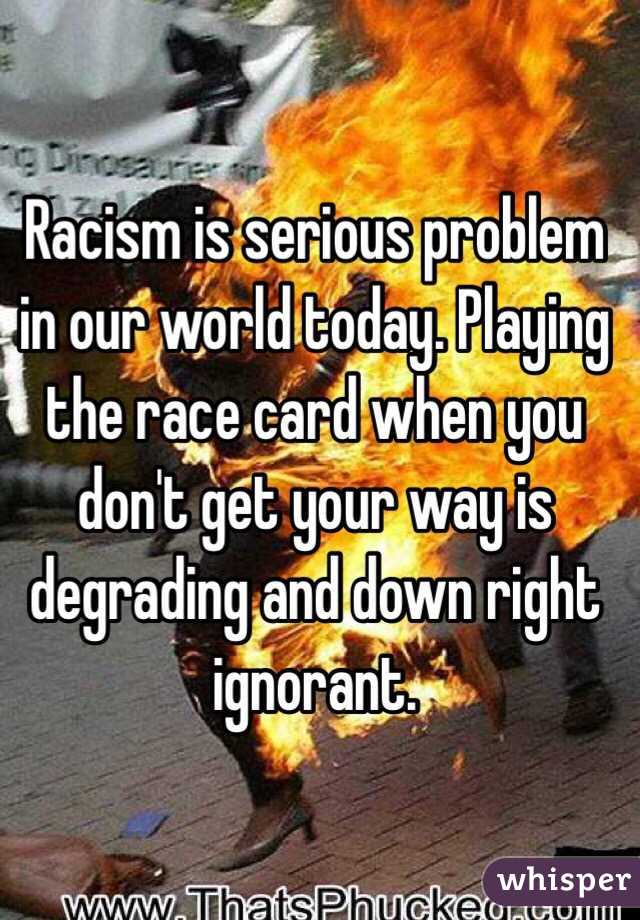 “… Everybody jumped on him, beat the hell out of him… Everybody was hitting him or kicking him. One guy was kick­ing at his spine. Another guy hitting on the side of the face-He was unconscious. He was bleeding. Everybody had blood on their forearms. We ran back up the hill laughing… He should have died… He lost so much blood he turned white. He got what he deserved.”

The skinheads, who performed this random act of racial violence in 1990, had no reason to brutally beat their victim other than the fact that he was Mexican. Racism is objec­tively defined as any practice of ethnic discrimination or seg­regation. Fortunately, racial violence is steadily declining as the turn of the century approaches. Now a new form of rac­ism, covert racism, has recently sprung from the pressures of political correctness. This new form of racism, although slowly declining, still shows signs of strong support. Covert racism assumes a form of civil disobedience against politically cor­rect thought and speech. Essentially, covert racism is a “hid­den” racism, or a racism not easily detected. “Racism is still strongly prevalent in today’s society.

Open racism expresses freedom of racial thought and speech. Open racists promote their views through strictly persuasionary tactics. This form of racism is allowed in our society because of the First Amendment. Open racism is cur­rently almost nonexistent and steadily declining, because it is considered politically incorrect and socially unacceptable. Violent racism promotes racism through violence, fear, and persuasionary tactics. This form of racism is not protected by the First Amendment because it promotes violence to express its ideas. Unfortunately many violent racial groups claim they do not promote violence, and therefore these groups are pro tected by the First Amendment because not enough sufficient evidence exists to prove their violent intent.

Covert racism expresses ideas of racism in disguised forms; sometimes the covert racist is not even aware of the fact that he is racist. Racism, it is asserted, is no longer bla­tant: people nowadays are reluctant to express openly their dislike of and contempt for minorities, indeed are not pre­pared to express publicly a sentiment that could be interpreted as racist. Racism, it is said, is subtle: it is disguised, kept out of sight. The suggestion that there is a new racism—a racism that has a new strength precisely because it doesn’t appear to be racism—deserves serious consideration. Avoiding minori­ties on the street and denial of a public benefit to a minority which would be awarded to a white are examples of covert racism. Since it is no longer politically correct to openly ex­press one’s racist views, people therefore favor disguised, indirect ways to express their bigotry. Covert racism is the most abundant form of racism in our society today.

What causes racism? Unfortunately, the answer is much longer and detailed than the question. The three main causes for racism are: racism has become part of our heritage, right-wing racial and political groups, and pride in one’s own race.

Practically since the dawn of man’s existence man has undoubtedly noticed differences between races. Racism’s pres­ence throughout the formation of our culture is quite evident. Frequently throughout history the ethnic group with the most power has assumed that its race and culture are superior to others. The same incident even occurred in America with the introduction of slaves. Throughout American history, racism has been strongly prevalent. Racism’s roots lie deep within the foundation of our society. These roots undoubtedly are the source for a great many of the racist groups and covert racism ideas found throughout our society.

Extremist social and political groups, particularly those advocating right-wing policies of racial inequality, promote racism as well. These groups serve as the epitome of racial thought and speech. The following represent various racist groups found throughout the United States: John Birch Society, Ku Klux Klan, Knights of the KKK, Invisible Empire, NAAWP, White Aryan Resistance, American Front, Nazi Skinheads, Posse Comitatus, Aryan Nations, The Order, and National Alliance. All of these groups are given the freedom to express their ideas of racism because of the First Amend­ment. Although the First Amendment protects the speech of these groups, many none the less find it necessary to use vio­lence to promote their cause. Racist groups now make exten­sive use of covert racism to extend their message of racism throughout our society. This form of racism has proven quite effective, in the past ten years, at persuading others to adopt racist ideas. These groups serve as a symbol of racism itself to many in our society.

A large source of the racism present in our society stems from one’s pride in his own race. Many people, especially those associated with racist groups; find it necessary to put down other ethnic groups in an attempt to strengthen their own. This mode of thought and reasoning usually results in extreme hatred of other races and an overall sense of bigotry. Reasoning in this manner equates to many associated with racist groups. Pride in one’s race may eventually lead to cov­ert racism thought.

Covert racism affects our society in a variety of differ­ent manners. Indeed it should be said that covert racism has permanently scarred our society, both politically and socially.

Racial politics have changed since the era of the civil rights movement, when the issue of race, at its heart, came down fundamentally to whether whites were prepared to ac­cept other races as their equals. Now, however, the issue of race has become more complex because there are now multi­ple agendas including affirmative action, quotas, and set-asides. The main agenda revolves around affirmative action, steps taken by an employer, school, or other institution to expand opportunities for blacks, Hispanic people, women or other minority groups. The clear implications of the most re­cent Supreme Court decisions on affirmative action programs is that such programs will be upheld in certain circumstances to remedy past discrimination. However, many whites view this special treatment of minorities for past discrimination as discrimination towards themselves. This “reverse discrimination” has lead to many debates and controversies concern­ing race and racial politics. Unfortunately this sort of politi­cal environment encourages covert racism in many whites as a counterattack against affirmative action. Our political sys­tem must first become racially unbiased before our society may become more ethnically diverse. If all men are created equal, then why should differences in race matter?

Unfortunately our society has not lived up to the stand­ards set by its forefathers. Racism, especially covert racism, still affects our society socially. Covert racism is a form of civil disobedience for racists to spread ideas of racism through­out our society.