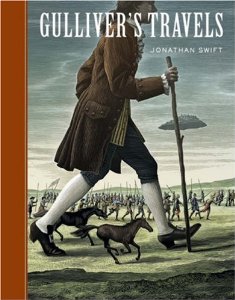 The purpose of this essay is to analyze Jonathan Swift’s Gulliver’s Travels from feminist perspective. To fully understand the views that Swift exhibited, with respect to feminist approach, it is important to have some background on Swift himself and women’s role in society in the eighteenth cen­tury.

In the time of Swift, women were considered the legal responsibility of their fathers or husbands. Whatever a woman said in public was a reflection of the ideas of her father or husband. The ideal wife was obedient, for if not their husbands were allowed to physically discipline them. The gen­eral view of women was that of an object to be enjoyed by men. It was feared that education of women might lead to a subversion of the natural order which gave men unquestioned dominance. It was commonly believed among men that women need not be educated at all, because their main pur­poses in society were to tend to domestic dealings and pro­creation.

Swift’s view of woman was influenced by the times and the society that he lived in. The paucity of love in author’s childhood and the little exposure he had to women when he was growing up also attributed to the corrosive personal iso­lation. Some critics like Lord Orrery, Middleton Murry and Norman O. Brown have suggested that Swift was a misogynist, because of the way in which he is attacking women’s physical aspect Jonathan Swift often mentions the female body with repugnance. He very often dwells with exagger­ated honor at the sight of a woman’s body performing its normal bodily functions. Many have concluded from this that he hated women and considered them inferior to men. Gulliver hates humanity through women. Swift portrays women as inferior creatures, comparing them to lusty, dirty, and igno­rant animals, ultimately leading to Gulliver’s disgust in women in general at the end of the novel. In the moral domain, women inspire as much aversion as they do on the physical side.

In Lilliput, Gulliver illustrates the carelessness of women, when he retells the story of the fire. The only way to extinguish the fire is through urination, an act so loud and gro­tesque that a woman could not handle it. The queen is auto­cratic and infuriated when Gulliver urinates on her apartment to keep it from burning. She decrees that public urination be banned and that the contaminated building be left as it is. The method by which Gulliver describes this event, leads the reader to believe that only a woman would act so harshly to his ac­tions.

In “A Voyage to Brobdinunag”, when the farmer shows Gulliver to his wife, she screams with disgust, the way a woman would react to a bug.

Gulliver in Brobdingnag discovers that his sense was more acute in proportion to his littleness. He sees everything magnified, he examines even thing as if through a microscope. Looking up close at the women’s anatomy, Gulliver notices that their skin seems very rough, discolored and greasy. In addition, he has difficulty breathing because of their strong and repugnant scent. He is disgusted by the sight of their huge pores, spots, pimples, hair and moles and even more repulsed by one maiden who places Gulliver on her nipple to play. Swift uses the Maids of Honor to illustrate flaws in a wom­an’s beauty that are generally overlooked or hidden. Gulliver expresses his aversion to their naked bodies. They were, “very far from being a tempting sight”, and gave him, “any other emotions than those of horror and disgust”. Gulliver makes the connection that the women of England, that he normally finds so beautiful, have the same flaws, but he just does not see them as easily because they are of the same size. “This made me reflect upon the fair skins of our English ladies, who appear so beautiful to us, only because they are of our own size, and their defects not to be seen but through a mag­nifying glass, where we find by experiment that the smoothest and whitest skins look rough and course and ill coloured.” Only the women are described as having such horrible discolored skin. Men had it too, but he only brought attention to the women.

When Gulliver describes a grotesque vision of human­ity in Brobdingnag, he generally uses women as the objects of repulsion. It is the Empress who eats in a grotesque fash­ion. When Gulliver sees beggars and homeless, he describes in unkind detail the lice crawling on their clothes. The home­less beggar with cancerous breast is a horrific sight to Gulliver as he can see into the crevices and cavities in her body, de­stroyed by vermin and disease. That is the most horrible spec­tacle that ever a European eye beheld”. Swift deploys the rhetorical “instruments” necessary for such disavowal figur­ing the decaying body as female.

In Brobdingnag, Gulliver is shocked to see the “mon­strous breast” of a nurse giving suck in front of him. Even the act of feeding does not escape his disgust: “I must confess no object ever disgusted me so much as the sight of her mon­strous breast…”

The flying island of Laputa (from the Spanish la puta, “the whore”) has been the object of several feminist discus­sions particularly to show that women are repeatedly described separately from men. The women are described by geometric shape and mathematical figures. Furthermore, the women are not allowed to explore or travel off the island without spe­cific doctrine from the King. In Laputa, a wife is someone who would rather prostitute herself than stay with her ne­glectful husband. According to Susan Bruce, Gulliver’s Voy­age to Laputa enacts men’s ultimate inability to control women’s bodies and desires.

In Houyhnhnms women were also supposed to be gross, lusty, sexual, benevolent and disgusting as the description of the Yahoo female shows: “The females… had long lank hair on their heads and only a sort of down on the rest of their bodies… Their dugs hung between their four feet and often reached almost to the ground as they walked.” A young fe­male Yahoo gets “inflamed with desire” at the sight of Gulliver. Never does Swift suggest they are more than what he presents them to be, nor does he suggest that they think, feel, love or are morally responsible. The Yahoo female who, driven by sexual craving, throws herself on Gulliver is a strikingly hor­rific image.

While the Houyhnhnm females are sexually modest and controlled, the Yahoo females are sexually aggressive: “A female Yahoo would often stand behind a bank or a bush, to gaze on the young males… and then appear, and hide, using many antic gestures and grimaces… and when any of the males advanced she would slowly retire, looking often back.”

Swift is attracted to women on one hand but repelled by them on the other. Women’s artifice and smells, to Swift, must have been both erotic and disgusting. We never hear the voices of the women however. Gulliver encounters several women in his travels but we never hear their opinions. We never find out how women think or what they feel about their own soci­ety. We also never find out what they think about Gulliver’s society. The reason for this is that women did not have figu­rative voices. The conversations that he had with the queen, the lady and the women in Laputa are not brought up because it doesn’t matter. Women’s voices were not important.

When Gulliver returns home from the Land of Houyhnhnms, he finds the smell of his wife and children re­volting, intolerable, due to his experiences with the Yahoos.

A closer examination of Swift’s work shows that attack­ing women is a misconception. Swift did not believe, as his society did, that a woman should not be educated. Although he does utilize the feminine gender as a vehicle for his social thoughts, his text is more concerned with satirizing humanity, in order to express his ideal for their existence. Swift is exaggerating the characteristics of each society, so that they can be clearly seen. In fact, Swift perceives women to be on an essentially equal plane with men in three different areas. These areas are as follows: social accountability, educational abilities and purpose of existence. Actually, considering the century in which Swift lived, his views are extraordinary and differ drastically from the views of most of his contemporar­ies.

Jonathan Swift’s writings convey that he believed that women should hold a larger role in English society. Swift also dismissed the idea that a woman should be valued on her physical appearance, rather than her actions as a human be­ing.

Swift believed that people typically behaved immorally. Swift did not judge men and women separately for their ac­tions, but looked at them as equally contributing factors in a society that was plagued by immorality, injustice and corrup­tion. Swift writes, “The handsomest among these Maids of Honor, a pleasant, frolicsome girl of sixteen, would some­times set me astride one of her nipples…” The sexual refer­ence and the attention to the girl’s age, signify the lack of morals instilled in some young women of Swift’s time. Swift makes examples of these women, not so much as to degrade them, but to condemn their behavior.

Swift is bashing, as much as the behavior of men and women in general. Swift puts women on the same level as men, where they are to be judged based upon their capabili­ties, and of being a worthwhile person, instead of an object of beauty. He goes to the extreme of using bodily functions as a means to symbolize equality, which also serves to express the ridiculousness of the entire situation. Essentially, what Swift is saying is that the value of a woman should be based on who she is and not what she appears or what a man desires her to be.

Jonathan Swift desired a better human race than existed in the 1700’s. He wanted a society in which women were educated equally with men. He wanted a society in which men and women placed a great deal of importance on their virtue, morals and intelligence. Through his satirical views of the human condition, Swift illustrates the weaknesses of mankind and his own ideal for the improvement of humanity.