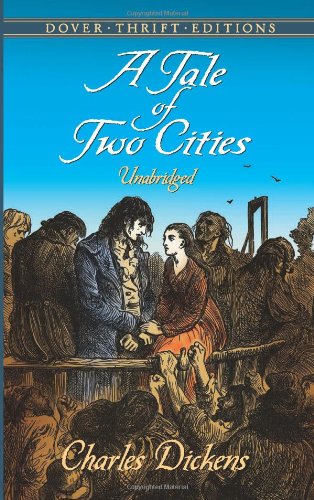 A TALE OF TWO CITIES- A HISTORICAL FICTION

A Tale of Two Cities is a novel categorized as historical fiction. Historical fiction is a composite material, with a por­tion of history embedded in a matrix of fiction. A Tale of Two Cities is appropriately titled, as the novel is the story of Eng­land and Revolutionary France; as a result it can be catego­rized as historical fiction. A Tale of Two Cities is parallel to history in many different respects. The English setting, and atmosphere, is similarly portrayed, as it actually existed in the seventeenth century. In the novel, Dickens goes into more detail about Revolutionary France in history with regards to setting, politics and the social structure, as well as the events, which occurred during the revolution. Dickens may not have been totally accurate with his historical information, but he vividly portrays the atmosphere of England and France dur­ing this period.

The French Revolution, by Carlyle, was the main source of Dickens’ information for his novel with the two settings, London and Paris. Adopting Carlyle’s philosophy of history, Dickens created A Tale of Two Cities with a tightly structured plot, developed through a series of amazingly detailed and vivid pictures. The English setting of A Tale of Two Cit­ies is very realistic with respect to the time period. Dickens starts the story by describing the atmosphere in England by illustrating the poverty and the economic situation. It is a tale, which tells of life in two cities and the dreadful happenings, which link them together.

Dickens also shows that crime ran rampant and robbery and murder were common occurrences in England at the time, “Daring burglaries by armed men, and highway robberies, took place in the capital itself every night”. This shows the terror that the highwaymen brought to the people in England,

The Tellson’s Bank, where Mr. Lorry works is based on a real life bank called Thelusson’s Bank. “Tellson’s Bank by temple bar was an old fashioned place even in the year one thousand seven hundred and eighty”. Dickens needed a name for the organization, which brings Lucie and Dr. Manette front France to England; he had read about Thelusson’s Bank in Carlyle’s work and shifted the name to Tellson’s Bank, which had branches in London and Paris. The setting in England is realistic for the time and is historically correct.

In A Tale of Two Cities, practically all of the French peasants lived in poverty. Dickens sets the atmosphere of a grim world of the very poor and the conditions of Frances’s streets as they were at the time. This is exemplified in the wine scene, in which the casket falls and smashes on the ground and everyone suspends his business and rushed to drink the wine.

“All the people within reach had suspended their busi­ness, or their idleness, to run to the spot and drink the wine. The rough, irregular stones of the street, pointing every way, and designed, one might have thought, expressively to lame all living creatures that approached them had damned it into little pools; these were surrounded, each by its own jostling group or crowd, according to its size…There was no drain­age to carry off the wine, and not only did it all get taken up, but so much mud got taken up along with it…”.

By writing about this situation, Dickens illustrates the type of life that the French peasants lived.

In France before the revolution the social structure had two extremes. The peasants hated the aristocrats for their power and money and this is shown in A Tale of Two Cities. This is revealed by a man in a crowd who yells to Monseigneur, “I devote you, to the Devil!” In other words, the aristocrats had “sealed their graves” because they were too cruel towards the lower classes. The lower classes did not have any civil liberties and were not allowed to participate in government.

The only historical characters in England in A Tale of Two Cities are King George III and Charlotte Sophia. Dick­ens describes King George III who is the King of England and Charlotte Sophia: “There was a King with a large jaw and a Queen with a plain face on the thrown of England”. Later Miss Pross says, “The short and the long is that I am subject of his Most Gracious Majesty King George the third”. Given that these characters are included in the book it can be described as historical fiction.

“Now, breaking the unnatural silence the whole city, the executioner showed the people the head of the king, and now, in it seemed almost in the same breath, the head of his fair wife which had had eight weary months of imprisoned widowhood and misery to turn it gray”.

Another historical fact that is included in the book is the storming of the Bastille. “‘Come, then!’ cried Defarge, …’Patriots and friends, we are ready! The Bastille’” The Bastille was captured by a huge group of Parisians that rushed it, and then began to tear it down (The Impact of the Revolution 3). This started the Reign of terror where anyone who was deemed an enemy of the revolution was thrown in jail and eventually killed. “He is a traitor since the decree. His life is forfeit to the people. His cursed life is not his own”. Anyone who openly disagreed with the new government or was supporters of the King were declared rebels and was sent
to jail (The Impact of the Revolution 3).
Since there are aspects of revolutionary France integrated into A Tale of Two Cities, it’s considered historical fiction. Tuileries is the palace where the monarchy lived France. “From the Palace of the Tuileries, through Monseigneur and the whole Court…”. The home of King Louis XVI and Marie Antoinette was The Palace of the Tuileries. It was the object of hatred to successive generations of French revolutionarics, and was eventually burnt down during the last days of the Commune in 1871.

The Bastille, a prison, appears in A Tale of Two Cities; this is also true in history. The Bastille was used as a state prison earlier in time. It was also used to watch over the city of Paris.

Dickens also makes clear of the type of judicial system which they had in France. If one was found guilty on an offense such treason or murder, they were hanged or were beheaded by the Guillotine. “The ridges thrown to the side and to that now crumble in and close behind the last plough as it passes on, for all are following to the Guillotine”.

Some of the characters in A Tale of Two Cities are based on people that were a part of the revolution. Defarge who owned the wine shop was based on the person called Lalarge. Carlyle casually referred to Lafarge, the head of the Jacobin Society, in his book: The French Revolution; A History. At Carton’s execution there were a number of women knitting, this is also what happened at the executions during the revo­lution. “In front of it, seated in chairs, as in a garden of public diversion, are a number of women, busily knitting”. Jacobin women were well known at the guillotine, they would knit while observing the executions.

A Tale of Two Cities is well portrayed by Dickens a historical fiction. He does this by including places in France and England that are well known. In many ways England and France are different but they are the similar in their terror and their troubles, this casts them in a parallel light, Dickens also takes historical events, like the storming of the Bastille, and makes them parts his story. Dickens’ objective in writing A Tale of Two Cities was to educate about a past event, the French Revolution. Dickens wrote the story in order to warn his Victorian inhabitants of what may happen if England did not make the necessary economic, judicial and political re­forms. He warned them that if they did not change their ways, a revolution might occur, like it did in France. Since aspects of setting and events are accurate in history, A Tale of Two Cities can therefore be described as historical fiction.