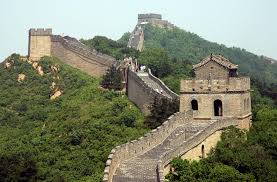 The Great Wall of China was first built two thousand years ago by the first emperor of China, Shi Huangdi. It is the only man-made structure able to be seen in space; because of this the Wall has been named one of the Seven Wonders of the World.

The Great Wall was built to drive out the barbarians (xongnu), who regularly raided the Chinese farming villages
Shi Huangdi gave Meng Tien the command of three hundred thousand men to drive out the barbarians. Meng Tien took the men to the south of the Yellow River and built the ten-thousand li (there is roughly 2 li’s to every kilometer) long wall. This took them over a hundred years to complete, by which time all original workers and lords have already died.

The wall surrounded the central, most important part of China so that the barbarians could not attack. However, the barbarians did attack several times before backing down.

Over the years, dust storms, winds and natural disasters wiped out the original Great Wall until all traces of it had been completely destroyed. It was rebuilt in the 15th century and it now stands today.

The emperor and the supervisor, Meng Tien, took the credit for building the Wall, but the workers who really built it were all nameless. A large portion of these people even died working. The rules that applied to these people were also very harsh; for example, a person could be sealed for­ever inside the wall for being lazy or even tired. This, ironi­cally, is supposed to strengthen the wall with the man’s spirit.

The Wall is made of large pieces of stone roughly craved so that it will not shift, inside is a core of rubble providing flexibility. There are three watchtowers to every kilometer of wall. Each of the watchtowers are equipped with a fire light­ing stand for alerting the surrounding towers, armies and vil­lages of whatever danger that may be coming.

Even though the original Great Wall of China no longer stands, the rebuilt one is still a priceless piece of Chinese history. It is a symbol of their determination and intelligence. The Great Wall is such an impossible task for the technology of the day that some historians and scientists even suggested the presence of extra-terrestrial beings. This shows how amaz­ing it was for the Chinese to do what they did-create an im­pression in people’s minds for thousands of generators to come.