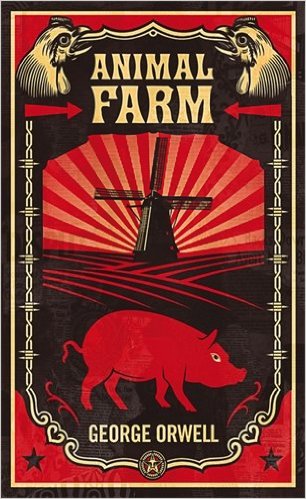 Communalism is supposed to be a system under which all property would be held in common. The dignity of the poor workers oppressed by capitalism would be restored, and all people would live as equals in communism. This book, Ani­mal Farm by George Orwell is an amusing story of allegory of the early history of the Soviet Union. Orwell wanted to make political writing into an art and to harmonize political concerns with artistry. As he became inspired by the Russian Revolution, he wanted to show how some governments would do almost anything it took to succeed the rest The book itself has acquainted many by providing a basis to describe the prob­lems of communism as it was once tried in Russia during the 20th century. We have a deeply marked example in the his­tory of Soviet Communism, where many were slaughter to only satisfy one person, Stalin. I believe George Orwell cre­ated Animal Farm with the goal of showing people that there is not a pure form of communism and to realize the mass amount of time, effort, energy, and lives it took for people (or animals) to realize that communism (animalism) would not succeed. In Animal Farm Orwell verified the moral economic failure of the Russian Communist system.

Mr. Jones symbolizes Czar Nicholas Romanov II, the leader before Stalin (Napoleon). Jones represents the old government (monarchy), the last of the Czars. Orwell implies that Mr. Jones (Czar Nicholas Romanov II) was losing his “edge”. In fact, he and his men had taken up the habit of drink­ing. Old Major reveals his feelings about Jones and his ad­ministration when he says, “Man is the only creature that con­sumes without producing. He does not give milk, he does not lay eggs, he is too weak to pull the plough, and he cannot run fast enough to catch rabbits. Yet he is lord of all the animals. He sets them to work, he gives back to them the bare mini­mum that will prevent them from starving and the rest he keeps for himself.” So Jones and the old government are suc­cessfully uprooted by the animals. Just like in November of 1917, when squads of Red Guards, sailors, and factory work­ers overthrew the government and showed them that they no longer had support.

The pigeons symbolize Soviet Propaganda to countries like Germany, England, France, and even the United States. The USSR was very enthusiastic about its achievements and its advancements in technology. Yet experts or scientists from outside countries were never allowed to check on its validity; just like Napoleon was very reserved on letting people inside farm grounds. The same happens as Orwell talks about the fact that the other farmers became suspicious and worried when their animals began to sing ‘Beasts of England’ and they saw they were surviving as their government was work­ing out. When an animal was caught humming the tune of ‘Beast of England’ they were whipped or beaten. The same happened in other countries. For example, there was a mas­sive nationwide “Red Scare” in the United States in the twen­ties. During the 1950’s in the U. S., Joseph McCarthy was a legislative member of the government from Wisconsin, ac­cused hundreds of people of supporting the Communist re­gime. The fear of communism became a phobia in America and anyone speaking out against the government was a sus­pect.

The proletariat, or unskilled labor class in Russian soci­ety are represented by Boxer and Clover. This lower class is naturally drawn to Stalin (Napoleon) because it seems as though they will benefit most from his new system. Since Boxer and the other low intelligence animals can’t seem to remember the time before the Revolution’s a result they really can’t compare Napoleon \s government to the life they had before under the czars (Jones). Also, since usually the lowest class has the lowest intelligence, it is not difficult to persuade them into thinking they are getting a good deal like Squealer did many times to cover for Napoleon’s lies. The proletariat is also quite good at convincing each other that communism is a good idea. Orwell supports this idea when he narrates, “Their most faithful disciples were the two cart­horses, Boxer and Clover. Those two had great difficulty in thinking anything out for themselves, but having once ac­cepted the pigs as their teachers, they absorbed everything that they were told, and passed it on to the other animals by simple arguments.” Later, the importance of the proletariat is shown when Boxer suddenly falls while carrying a large stone and there is a drastic decrease in work productivity. Like in Soviet history, when the farmers, who were the strength and producers of the country, decided to only make enough for themselves the amount of food decreased and famines started going around. In other words, without the proletariat the, the base, everything collapses or dramatically decreases. Yet still Boxer is taken for granted by the pigs, which send him away in a glue truck to the Knackers, as he was sold to obtain money for whiskey. And this is how the common man is betrayed and lied to in the history of the Soviet Union.

The concept of alcohol or beer seems to be used to sym­bolize the old Russia. Jones (lost total control of his farm and animals as he and his men became alcoholics, acted meanly towards the animals, and ignored their vital needs to survive. Just like Jones, the Czar lost control and power over his coun­try as the people of his country overthrew him along with his government officials in November of 1917. Above all, I be­lieve alcohol symbolizes corruption more than anything does. Corruption as if they were drunk on prosperity, which never came down to the common man (animal). Thus, eventually it’s this drunkenness, which wrecks the whole government and leads to the downfall of this system. Jones lost power over the animals when he became drunk and lazy; even Napoleon will eventually be overthrown because of the alcohol he intakes. Just like the czar, as he couldn’t resolve economic problems. In the end of the book, Orwell says that in genera­tions to come there will be still more uprisings. ‘Some day it was coming: it might not be soon, it might not be within the lifetime of any animal now living, but still it was coming.” Alcohol was originally seen as a grave evil from the very beginning this old habit took place. Even Old Major repeat­edly warned the animals against taking on Man’s ways, but his concerns are not pay attention to and his prophecy came to existence. Thus, Napoleon had Squealer change the com­mandments.

The windmill clearly symbolizes Soviet industry and the pigs’ manipulation of the other animals for their own gain. The windmill was destroyed numerous amounts of times be­fore it finally was complete. Congruently the Five Year Plan failed twice as did the windmill. This represents the trials the communists in Russia went through to establish their arma­ment -production industry. Despite the immediacy of the need for food and warmth, the pigs exploit Boxer and the other common animals by making them undertake backbreaking labor to build the windmill, which will ultimately earn the pigs more money and thus increase their power. Eventually the Russian industry did stabilize, though there was a deep need of safety measurements and slight concern for the peo­ple’s well being was taken. Despite their early success in be­ing the first to put up the first satellite in space, the Soviet industry fell behind the Western world. Russian industry stalled from the lack of initiative and morale. The average middle-class worker received no special treatment and was treated as a “person of the state.” Established laws could be broken by any important member of the Communist regime. The original ideology of Marxism was innocent enough, but it was twisted and convoluted by Lenin and Stalin. Just as Napoleon and Squealer changed and twisted the seven com­mandments of Animalism. Russian communism became a hypocritical government, which would without doubt weaken, and collapse. Ironically, Orwell didn’t write a final collapse of the windmill, which would perhaps have symbolized the

At first Napoleon seems to be a good leader and deeply dedicated to Animalism and to the prosperity of the farm, he is eventually overcome by greed and soon becomes power-hungry. Of course, Stalin did too in Russia, leaving the origi­nal ‘equality’ of socialism behind, giving him all the power and living in luxury while the common peasant suffered. While his national and international status flourished, the welfare of Russians remained unchanged. Orwell explains, “Somehow it seemed as though the farm had grown richer without mak­ing the animals themselves any richer—except, of course for the pigs and the dogs.” The Napoleon’s true side of becomes pretty obvious after he slaughters so many animals for ‘plot­ting’ against him or having dreams about Snowball. He even hires a pig to sample his food for him to make certain that no one is trying to poison him. Stalin, too, was a cruel dictator in Russia. After suspecting from many people in the country of being supporters of Trotsky (Snowball), as Stalin thoroughly murders many. By the end of the book, Napoleon doesn’t bother to pretend to lead a socialist government. After re­naming it ‘Manor Farm’ and instituting his own version of the seven commandments and the ‘Beasts of England’, Napoleon becomes more of a dictator.

I deeply and truly believe communism will never carry out the way it is planned to. There are too many factors to support this. However, what I’ve come to an understanding is that Communism does not give equality. If anything, it only takes away the little freedom some may have. Thus, it also demolishes all hopes and dreams for it sets a constant never-ending future.  There will always be an abuse of power to­wards the nerve proletariat who are constantly seeking to better themselves. No matter the quantity of efforts towards equality one may give there will not be equality; for we as humans become obsessed with power once we are entrusted and only to become even more power-hungry. I can say truly teamed from this book that communism will never be an ef­ficient part of any government. For freedom is taken away without a warning as people become one with faded dreams of the better tomorrow. I believe George Orwell carried out his goal of teaching people that communism would not be efficient and if anything, the most loyal like Boxer would die in immortal hopes of life ever progressing.