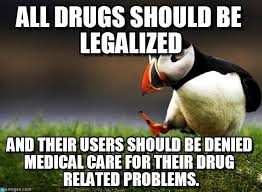 LEGALIZE ALL DRUGS, OR ELSE…

Legalization of drugs is probably the only way with which we can preserve some of the sanity still left in this world. The war on drugs is costing us over 100 billion dollars to fight each year, and we’re only fighting a monster which we are making bigger with each punch. It’s not drugs, but drug laws themselves that have created this monster. Drug use is part of human nature, but the unimaginable wealth involved leads to the corruption of the police, judges, and elected officials. There is no reason to have the government regulat­ing what goes into an individual’s body. An extreme case of what we’re letting the government do is letting them take away our own self, an individual’s ownership over his own body. I think it’s in everyone’s interest to legalize all drugs, since this war is going nowhere, letting the government get more powerful than it was ever meant to have been, and it’s putting numbers over our names.

There is no way that the drug flow into the United States is ever going to be stopped. It’s a general economic rule, that as long as there is a demand for drugs there will always be a supply, unless scarcity occurs, but it doesn’t appear as if Co­lombia is running out of cocaine anytime soon. Cocaine brings Bolivia’s economy $600 million per year, a figure equal to the country’s total legal export income. Our country’s current annual import of cocaine would fit comfortably into a single C-5 A cargo plane. The United States is just too large; there is no way to stop an import of a drug completely. By keeping a drug off the streets, its price soars, which makes the drug profitable. You can’t stop the spread of drugs by making it more profitably. This simple concept the government does not seem to understand. Each time an agency makes a drug bust it makes the monster bigger, the drug more profitable. Revenues for drug trafficking in Miami are greater than those from tourism exports, health care, and all other legitimate businesses combined.

The only way to kill this monster is to make it collapse on its own weight. By legalizing drugs the whole black mar­ket would crumble, making illegal drugs as expensive as pre­scription drugs, the whole world economy would also benefit greatly. South American countries could finally get out of debt by legally exporting drugs. There is no way that the United States is going to stop the whole world from producing drugs. When they paid Turkey to stop the growth of opium, produc­tion merely shifted to Southeast Asia and Afghanistan. Drug use has been in human history, and no law of any kind is going to stop humans from experimenting with drugs. Alco­hol, one of the most dangerous drugs, a drug known to trigger violent behavior, and cause 40% of all car accidents is legal. This seems to be hypocritical of the government, and it’s rac­ist since throughout history the white man has predominantly used alcohol. Marijuana use for instance was largely confined to people of non-European descent, and that’s what made it relatively easy for the first marijuana laws here in the United States to be passed some 60 years ago.

Drug offenders account for more than 60% of the prison population, to make room for them, the real criminals are being returned to the streets. How can a child molester and a drug user end up in the same facility? By locking up our own citizens, we are not winning any war, but causing disrespect for the law and authority in general. Mandatory minimum sentences need to be abolished and law enforcement needs to decrease if today’s youth is to show any respect for authority. Today’s people are tired of all this shit, all we want to do is live. If the government doesn’t do something to change its ignorant and narrow views the new generation is headed to­wards a revolution.

I f drugs were legalized crime would decrease drastically.

Most robberies are committed to obtain drugs, since prices soars every time there’s a drug bust. So in fact, when it seems a successful attack has been launched in the war, it backfires and the number of crimes increases. The only way to stop our society from consuming drugs is through education, not prison cells. I’m not advocating the use of drugs, but I don’t know of any person who has not done a drug just because it’s illegal. If our government really cares for its people then it would at least make sure that the drugs that its citizens are consuming are acceptable in quality, so overdoses and tragic deaths would not continue. The money that the government would obtain from selling drugs would be used for providing education, and for more treatment programs. The 100 billion dollars that we’d be saving each year could go to help this country be­come an even stronger nation, one who fights for the human rights, and freedom.

Yes, the government can keep fighting this lost war, keep putting people behind bars for putting something into their own bodies, keep making drug dealers richer, and drug users poorer, keep the existence of police corruption, keep crime at a high level, and youth full of hate for authority. We can no longer afford to just stand and look at the government do whatever it wants. The government is made for the people, by the people, but often we forget this, pretend as if the gov­ernment is its own person. However we have fought the drug war we’ve defiantly failed, and if there’s a reasonable and a better way we can resolve this problem, shouldn’t we the peo­ple give it a try?