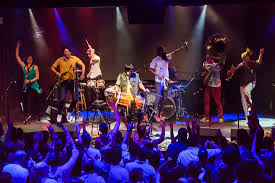 The human brain is a consortium of emotions. There is love, there is joy and there is happiness. But there also are the darker emotions: rage, anger, pain and disappointment. Sadly, there is no one ring that rules them all, no one genre that expresses them all. For metal-heads, ‘heavy metal’ is that sip of an energy drink, which inspires them to overcome their helplessness at the hands of these emotions. The heavy sound and the fantasy, the violence and the occult inspired lyrics create an illusion of power! They make the listeners feel powerful, capable enough to control their emotions and pursue their dreams. This is heavy metal, a genre that has withstood the storms of time and inspired the metal-heads to withstand those of life!

Heavy metal is a manifestation of the darker feelings. Most heavy metal bands find their inspiration in pain and struggle. They are people who’ve experienced the miseries of life and fought with circumstances. To strive, to seek, to find and not to yield; this genre of music is all about the in­domitable human spirit. The fans love the music because it is true, it is pure, from the heart and it is something the artist believes in. Heavy metal is unafraid. It is about issues that affect everyone but no one dares to talk about. This fearless­ness is what makes the music oh-so-unconquerable!

A pertinent question remains – Why heavy metal in In­dia? It is one of the most distinctly non-Indian forms of mu­sic, coupled with the fact that an average Indian metal-head leads a life of deprivation, devoid of things which define heavy metal, be it original sound or even the mosh-pits, stage dives and crowd surfs. Yet its popularity in the country has bur­geoned like that of no other genre of music. College fests can do without a cultural night, but a rock night or a rock band competition has become, a must. Most college bands now play heavy metal, and its numerous sub-genres. Seeing, as India is the least ‘metal’ in terms of its overall environment, the probability of such a following is expected to be much lower. However, the numbers suggest otherwise.

The reasons for its growing popularity are not unobvious. The frustration, suffering and angst associated with heavy metal music in the west have a worthy Indian counterpart incessant academic pressure.

In a country like India where average means bad, the lack of a successful academic life can lead to frustration. Peer and parental pressure, added to the overtly competitive at­mosphere makes students turn to heavy metal music as a geta­way from their hectic lifestyle. Heavy metal acts as a respite from the triteness that creeps into and takes hold of college lifestyle. “Classes, projects, assignments, tests… It was getting to be too hectic and monotonous. I felt my creative in­stincts were getting tied down”, says Devadittya Banerjee, lead guitarist of Kzur.

To many, this metamorphoses into an attitude .statement. The rebellious aggression that is portrayed by rock-stars of­ten attracts youngsters towards it. It not only embodies the spirit and energy of youth, but also exemplifies the victory of freedom over authority. “This kind of aggressive music has always been magnetic to youngsters and it’s all about atti­tude, that’s what Danpitey is all about,” says Dipankar, vo­calist for one of Kolkata’s college band, Danpitey. “Danpitey means a fearless young child and the band manifests every­thing possible to portray our fearless image,” he adds. Many share this view, and the vast multitude of black T-shirt clad youngsters sporting long hair exemplifies this fact to a cer­tain degree. Another reason that can be ‘attributed to the grow­ing legion of rock and metal musicians in India is the osmo­sis of Indian classical music into rock. Guitar legends like Steve Vai. Marty Friedman and Eric Johnson, to name a few, have infused a distinct Indian flavour into their musical style. This has caused many young Indian classical musicians to take notice, and indeed, try their hand at the same. The fusion of rock and metal with classical music is the perfect amalga­mation of their two facets for these musicians, which has given rise to subgenres like Vedic metal.

Heavy metal is not just about the music. It is a cult, a wholly unique culture with its peculiar beliefs, symbols and traditions. Its imagery is undoubtedly the most unique and vivid. Iron Maiden in their first show on Indian soil gave the metal-heads something they’ve never experienced before. The six men who stood next to the beast emancipated power of proportions not even conceivable to everyday beings. That illusion of power far surpassed superhero fantasies by its mere being. It was real, almost palpable. And at that moment, any mention of Bruce Dickinson being a mere mortal would’ve been greeted with the collective derisive laughter of thou­sands. To the 20,000 people in Bangalore watching Iron Maiden play that night, he was nothing short of divine, inspiration enough for another generation of metal-heads to dream of becoming as powerful as Dickinson and Co someday. And may be motivated enough to not give up their original sound in the pursuit of being a bit more saleable or in search of a more secure, well-paying job.