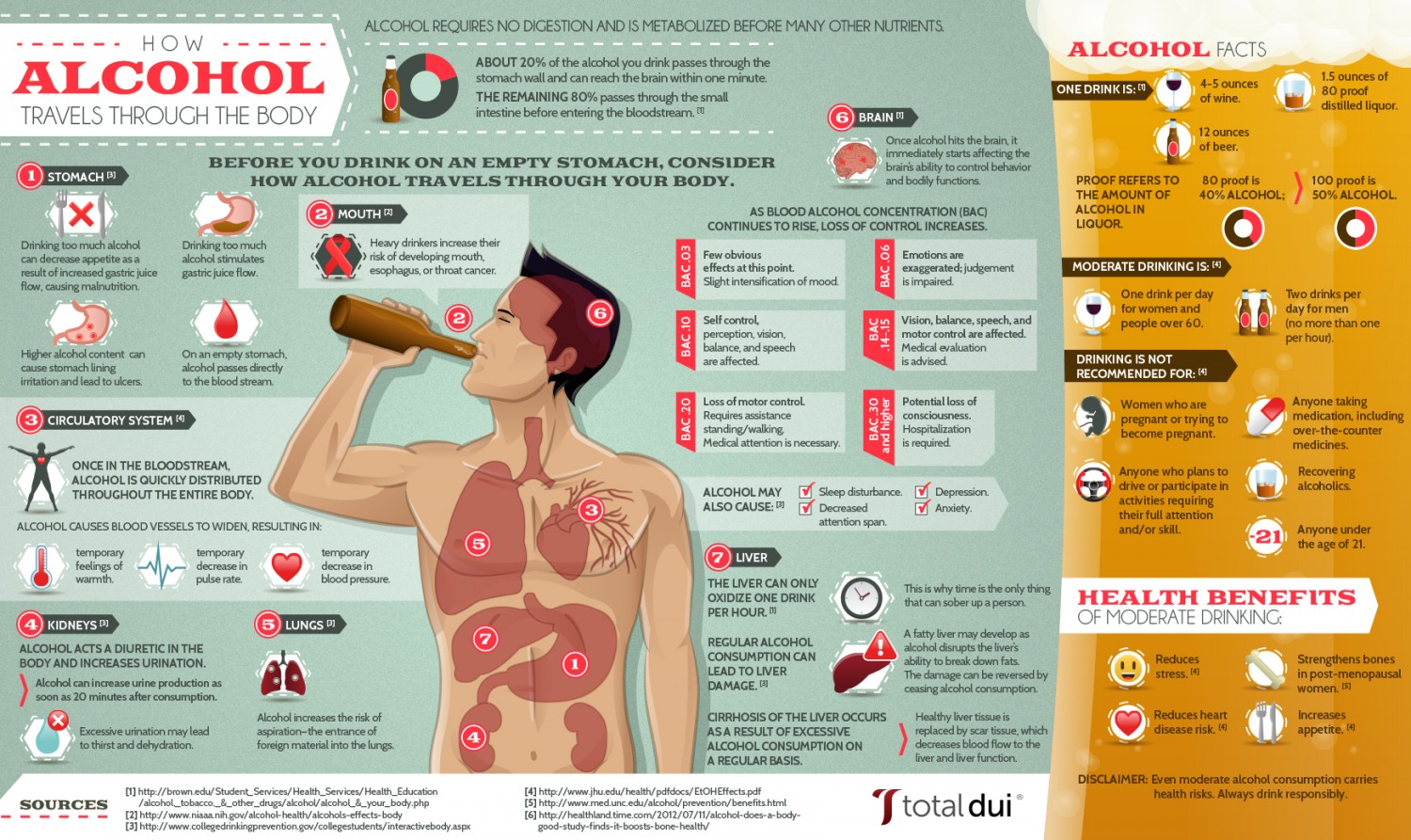 THE DANGEROUS PATH OF THE ALCOHOL

Drinking alcohol, in excess, can cause severe damage in our internal organs. However, if we learn how our body metabolizes alcohol. We can prevent illness caused by alco­hol abuse. The alcohol in beverages that we drink, contain ethyl alcohol which is made of a fermentation process of sev­eral products such as corn, potato mashes, fruit juices, beet. and $agar cane. Today, mass production of alcoholic bever­age is through hydration process. Alcohol is easily mixable with water, and since plasma and serum have the same water content (92%) alcohol freely travels through our body alter­ing and harming the gastrointestinal system, the cardiovascu­lar system, the nervous system, and the reproduction system.

The alcohol metabolism in our body starts in the gastrointestinal system, which is compound of the esophagus, stomach, liver, and intestines. We normally consume alcohol orally where it flows down into the esophagus and then goes to the stomach where it retains 20% of the alcohol. In the stomach, alcohol absorption depends on several factors such as amount of alcohol, type of alcohol, gender, and age of the person, and the gastric emptying, which is an empty stom­ach. As a mater of fact, the type of food that we eat such as fat carbohydrate, or protein is not a factor in the delaying alcohol absorption. For example, it does not mater if it is a healthy or grease food, but we need to eat something while we are drinking. Another interesting factor for delaying alco­hol absorption in the stomach is physical activity. Abuse of alcohol can cause gastritis and chronic esophageal inflam­mation, which can lead to esophageal cancer.

The next step of alcohol in our gastrointestinal system is the liver. The liver is the biggest organ in our body and the most vulnerable to alcohol. The functions of the liver in our body are to help the stomach to digest food and to filter waste and poison in our system. Alcohol disturbs the liver func­tions by not letting it perform its usual tasks. The illnesses caused by alcohol in the livers are the fatty liver, accumula­tion of fat in the liver and hepatitis, which is the inflamma­tion of the liver; and cirrhosis, which is excessive scar in the liver tissue. Since that the liver can regenerate itself, fatty liver and hepatitis can be cured or reduced by stopping drink­ing; however, cirrhosis is a chronicle and fatal disease which cannot be cured, but can be treated. One important fact about cirrhosis is that happens with 15% to 30% of heavy drinkers. The 80% remains of alcohol go to the small intestine where it is distributed into the blood system.

The alcohol has negative and positive roles in the car­diovascular system. Our cardiovascular system is compound of a heart, arteries, and the veins, and its function is to circu­late the blood that carries all the nutrients necessary in order for our body to function properly. The function of the arteries is to send the blood to our system. Alcohol affects the arteries by changing the HDL and LDL lipoproteins rate, which are molecules of fat and proteins. By changing the HDL and LDL rate, fat plaques starts forming in the arteries wall which will result in restriction blood flow. Also, alcohol abuse in the long range can change the structure of the heart, and by doing that the heart increase in size which will slow the cardiac out­put. This will cause a heart failure. Women are more suscep­tible towards having more heart problems from alcohol com­pare to men. Alcohol also will change the heart rhythm, and by altering the heartbeat, the supply of blood to the brain and the body in compromised. On the other hand, moderate alco­hol consumption will reduce the formation of plaques in the arteries, will protect against formation of blood clot, and will promote blood dissolution.

The nervous system is the most complex system in our body. The brain is the main organ in our nervous system, and it is responsible for controlling our emotion, memory, and movement. Alcohol attacks our brain in several ways. First, the contamination and waste material that were supposed to be filtered by the liver are being carried to the brain through the bloodstream and affecting memory, speech, and other func­tions. If you have 0.08 BAC (Blood Alcohol Concentration) you cannot drive under any circumstances, this is one Law of Florida Department of Driving under Influence. This is be­cause when you have more than 0. 03 BAC, you reduced at­tention span, and loss coordination. Therefore, it is very dan­gerous to participate in any activity in which concentration is needed because your body does not work properly; second, because alcohol alters the heartbeat, it will vary the blood pressure and flow, causing atrophy in different parts of the brain and decreasing brain activity. Third, alcohol will inter­fere chemically in the neurons commutations thus interfering with the brain commands to the body. Wernicke-Koriakoff syndrome is a disease caused by abuse of alcohol and what it does is to cause dementia by not remembering new informa­tion.

Alcohol changes the normal functions of the reproduc­tion system. Alcohol affects men and women. However, it is with women that alcohol shows its disturbing side because does not attack women, but their unborn baby. In men, alco­hol metabolism alters testosterone synthesis, and sperm pro­duction. Alcohol will lower the production of testosterone in the men’s body, which in the future it can develop in feminization in males; for example, breast enlargement. Also, alcohol interferes in the normal sperm development by stop­ping vitamin A, which is essential for sperm production in testicles. The women’s reproduction system is where alcohol abuse becomes disturbing by affecting pregnancy. During pregnancy, women send all the nutrients to the fetus by the umbilical cord. Therefore, when women drink alcohol, they are poisoning the fetus. This process is called FAS (Fetal Al­cohol Syndrome). FAS interfere in the development of the fetus during the first eight weeks of pregnancy. Consequently, the child will bear with low birth weight, facial abnormali­ties, eating and sleeping problems, along with learning dis­abilities, behavior problems, and the need of special educa­tion and medical care. Unfortunately, women do not know that they are pregnant during the FAS period.

The effects of alcohol on our bodies can be prevented or reduced through learning how alcohol metabolizes in our body. We need to educate ourselves by knowing how much, how often, and when we drink alcohol. These simple tasks will avoid the development of future diseases; prevent car acci­dents, and prevent harm to the people we love the most.