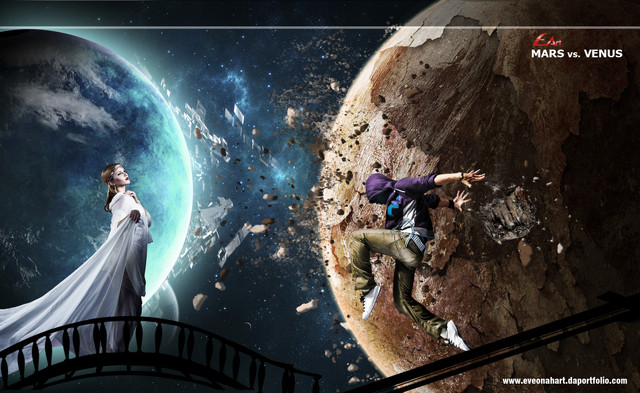 In his essay “Men from Mars and Women from Venus”, John Gray explored the intrinsic differences between men and women in a way that has helped millions of people to under­stand why relationships between the two sexes could be so frustrating. Gray was correct when he talked about women cherishing love, communication, beauty, and relationships. However, he oversimplified the gender differences between the two sexes. Though women appreciate the beauty in life and want to live with tranquility, they also corrupt by their desire for power, love for competition, and want for achieve­ments.

The premises of John Gray’s essay were set many years ago when all men lived on Mars and all women lived on Venus. Once they got together, they respected and enjoyed their differences—until one day when everybody woke up, com­pletely forgetting that they had once came from different plan­ets. Ever since, men mistakenly expected women to think, communicate, and react the way men do. Gray also believes that Venusians are more concerned with living together har­monically, communicably, and loving cooperation. Instead of building highways and tall buildings, they prefer building a Utopia. “Relationships are more important than work and technology, says Gray. Rather than developing new technology, they build up their relationships with others. On the other hand, Martians get their sense of self from achievement, usually focus on a goal, and tend to be very competitive and self, reliant. The two sexes, according to John Gray, were unlike in their way of life because they came from different worlds-women from Venus while men from Mars.

Gray also had some correct points when he stated that women value love, peace, communication, beauty, and relationships. Because of this, women believe romance to be very important; and also value and believe it is critical to sharing ideas, views and life. That is one of the reason they think art, music, and culture are beautiful, as they romanticized life. For example, Queen Elizabeth I proved these characteristics of women. During Queen Elizabeth’s reign, there was peace in England even from all the chaos caused by conflicts be­tween Protestants and Catholics. Not only did she value peace, she was also a great patron of the arts. Her reign, known in English history as the Elizabethan period, was an era of great accomplishment in England—a heroic age of exploration and a grand time for art development. During the Age of Explora­tion, Francis Drake sailed around the world, Martin Frobisher voyaged to the Arctic regions, and Walter Raleigh helped colo­nize America. Poets and dramatists like William Shakespeare and Edmund Spenser helped create the “Golden Age” of Eng­lish literature. However, it was Elizabeth herself who vastly changed England’s standing among European nations. Not only was she a respected peacemaker for her country, but she was also proved to be more. John Gray showed that women are only peaceful beings—a point of view which was true to some extent—but they were also corrupted in other ways.

Besides valuing the beauty of the earth and harmony, women are not tranquil as shown is Gray’s essay; they also love the sense of power, the rush of competition, and the ful­filling feeling of achievements. Again, an example of the same Queen Elizabeth can be used to prove Gray wrong. Eliza­beth, was one of the daughters of a legendary King Henry VIII, initially did not want to face the heated conflict between Catholics and Protestants in England, but being the heir to the throne, she was forced to. After many years of disagreements, Elizabeth gave her country peace by dictating her royal degree; women are not as delicate as stated in Gray’s essay. She ruled with respected authoritarianism, showing her ca­pabilities of being a powerful queen. Instead of living in peace, she led a score of soldiers against the Spanish Armada in July 1588, instilling in her soldiers the will to battle and win; she would continue to fight the Spanish forcefully for 15 years. Despite the dark events of war and religious murders, Eliza­beth s reign is best remembered for extraordinary achieve­ments. She believed it was her divine mission to lead Eng­land, and under her direction, the country became strong and unified. Therefore, commerce and industry prospered. Eliza­beth I gave her country peace; however, she also gave it pres­tige and power. Women do not always fit under the stere­otypical views of being tranquil; they also love competing to show their power and achieve their goals.

Women do in fact cherish relationships and art, as stated in John Gray’s essay, but they also love power. John Gray’s essay is true in some areas, but false in others as shown by the life of England’s, Queen Elizabeth I. Queen Elizabeth, known as the most successful monarch ever sits on the Eng­lish throne, gave her country peace from the hostilities be­tween the different religious sectors and the Spanish attacks. This showed how women wanted serenity across the land. However, while she did reign with peace, she went through great lengths to achieve this goal. Queen Elizabeth dictated her royal decree on numerous times and proved herself a cyni­cal opponent to the Spanish. Though John Gray was right in writing that women seek harmonic beauty in life, but he was wrong because women also tried to get power, compete, and accomplish their goals.