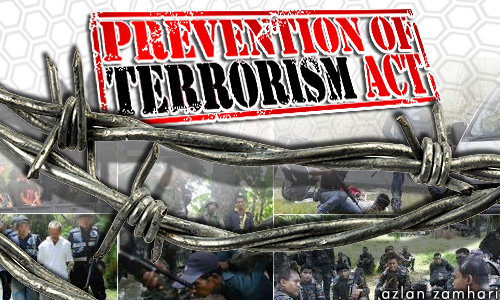 “Till 11th September, 2001, the increasing number of incidences of International Terrorism couldn’t awaken the US and the world from the slumber of overconfidence of their intelligence, and their preaching to soothe the wounds of the suffering nations was a routine political mechanism for them”.

The terrorist strike on the US’ heart and soul on 11th September, 2001 made everyone aware to the grave menace of international terrorism and compelled the nations all over the world to initiate urgent measures to fight the devil.

The terrorist attack on Indian Parliament on 13th December, 2001 made every leader vulnerable to any such attack and the urgency of taking measures against growing terrorism became more serious. On 21st September, 2002, the United Nations Security Council passed a resolution seeking all nations to enact laws to curb terrorism. The UK had already passed Anti-Terrorism Act, 2002, and India too passed Prevention of Terrorism Ordinance (POTO) on 25th October, 2001.

The promulgation of POTO triggered boisterous debate and controversy in different segments of the political arena. The opposition stated, it to be the black mark in the ruling coalition’s way of Governance. The main point of opposing, the POTO was the fear of misuse of the ordinance, as experienced in case of TADA (Terrorist and Disruptive Activities Act) and other such detention laws enacted earlier which were grossly abused to suppress the voice and views of the political opponents. The so called advocates of minority communities raised a lot of hue and cry on the same grounds.

After independence, several such laws were passed by the Union and State legislatures as per the requirements or whims of the ruling party, for varying purposes like Prevention of Detention Act 1950, Maintenance of Internal Security Act, 1980, Terrorist and Disruptive Act, 1985. POTO the Ordinance was promulgated to create a feeling of fear of gross penalties in the minds of terrorists and their accomplices, after an attack was made on Indian Parliament, which later on became an Act, in 2002, popularly called Prevention of Terrorism Act, POTA.

POTA and TADA are not identical Acts. TADA also covers the disruptive activities, while POTA covers only the terrorism activities. POTA allows appeals against rejection of bail in the High Court while a detainee under TADA, could appeal before the Supreme Court only. POTA also lessens the victim’s rigours beyond the first year of detention and reduces the period of detention without a charge sheet. POTA’s scope extends beyond the terrorist to terrorists organizations and their supporters and accomplices who by definition are not terrorists, but support the terrorists indirectly. The POTA empowers the government to tap telephone and other communication Medias of the accused. Government could also confiscate the proceeds and remunerations of the accused; he received for committing acts of terrorism. As such POTA has more harsh and ruthless provisions than TADA to some extent.

Under the prevailing situation of growing terrorism in the country and worldwide none could dispute the necessity of appropriate laws to curb the terrorism. Surely, the safety and security of the nation is of paramount importance and when the neighbouring countries are supporting and mobilizing the terrorism in our country, it is but natural to have some dreaded laws to tackle such a threatening situation. Though in a large democratic country like India, many times opposition is made only for the sake of opposition, yet for any act to be acceptable, it must have reasonable fringes so that innocents are not made the victim to square up one’s political or personal scores.

The Act, does not define the term ‘terrorism’, which caused a fear of misuse among the minority community particularly.

Section 3 (8) and 14 of POTA attracted strong protests of National Human Rights Commission and the media in general. Under these Sections an accused can be imprisoned up to one year or be fined or both penalties be imposed, if the accused fails without reasonable cause to disclose any information in his possession, which could prevent a terrorist attack. The journalists feared that this provision can well be used against them.

Under this Act, the Central Government has power to notify any organization as practicing terrorists activities, by naming such an organization in the schedule under the Act. The minority community feared that this provision can also be misused.

In order to avoid and prevent the misuse of POTA, the Central Government constituted a review committee headed by former Justice Aran B Saharya, under Section 60 of the Act, to take a comprehensive view of the use of POTA in various states and come up with its findings and suggestions to ensure that the Act was invoked only for combating terrorism and not against an ordinary criminal under Section 60 of POTA, the Central and State Governments shall wherever necessary constitute review committee for the purpose of the Act. The broad power of review is provided under Section 19 and it relates exclusively to the review committee appointed by the Central Government. Under the provisions of Section 19, an organization can be denotified from the lists of terrorists’ organization.

An Amendment to POTA was also passed in the Lok Sabha to prevent and revert the misuse of POTA. It is important to note that MDMK leader Mr. Vaiko was jailed by Jaylalitha Government under POTA. Mr. Vaiko’s crime was to allegedly express support for the LTTE designated as a terrorist organization. On the same day, the Supreme Court delivered a judgment whereby upholding the validity of the law, but at the same time laid down host of guidelines about the way the Act should be read. One can’t be charged under POTA unless it is proved that the accused has the criminal intention of aiding terrorist organization.

The Apex Court also upheld that individuals can’t withhold information about terrorists’ activities, can one be sure that there won’t be a repeat of the fiasco that involved Delhi University lecturer SAR Geelani. POTA despite the removal of a fang, here and there, remains a flawed law.

In Indian perspective, POTA is misused less, but got criticized much and in a democracy, where opposition is always in search of an opportunity to criticize the ruling party it is inevitable. The much hype raised by minority community that most of the accused under POTA belongs to minority community; it also reflects that the criminals of minority community receive support from their clan members in India. Can we imagine without direct or indirect support from here, can anyone from outside commit any act of terrorism? India is a secular country where everyone has the right to follow religion of his choice, but every citizen must feel its duty towards the nation and do not forget that Nation is on priority over the religion. The politicians who misuse POTA to score their personal vendetta must realize that politics of vengeance never pays in the long run.

In a nutshell POTA is the necessity of hour but it must not be misused. Nation’s safety and security has paramount priorities and POTA is meant to make the nation safe, secure and united.