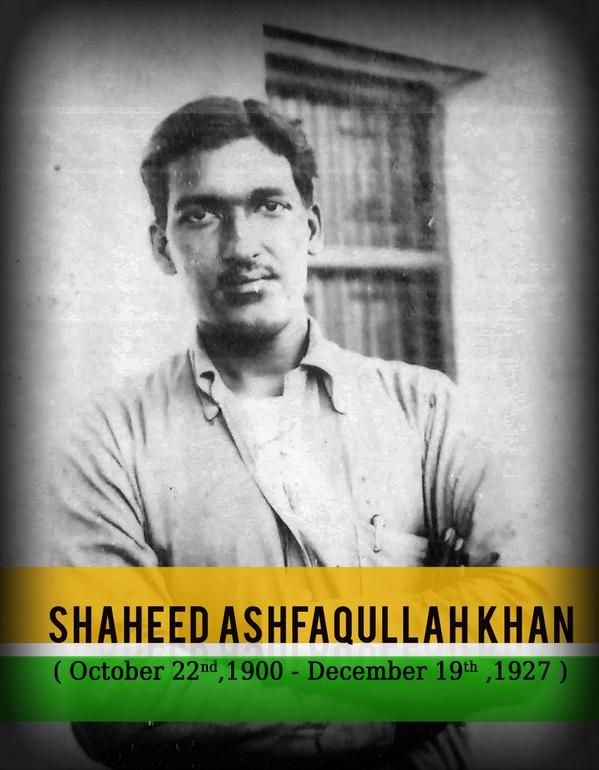 “My hands are not soiled with the murder of man, God will give me justice.” -Ashfaqulla Khan

Born in Shahjahanpur, Uttar Pradesh, Ashfaqulla Khan was the son of Shafiqulla Khan. In 1921, Mahatma Gandhi had called on all Indians not to pay taxes to the government or co-operate with the British. This non-cooperation movement kindled the fire of freedom in the hearts of all Indians. However, with the Chauri Chaura violence which resulted into setting ablaze of a police station and death of some policemen, Mahatma Gandhi called off the non-cooperation movement in February, 1922. The youth of the country were greatly disappointed with this calling off the movement and they themselves resolved that the country should become free as early as possible. Ashfaqulla Khan joined the band of such revolutionaries. Ramprasad Bismil who also hailed from Shahjahanpur was the leader of the militant group of these revolutionaries. A friendship was cultivated between Ashfaqulla Khan and Ramprasad Bismil. He was an Aryasmaji whereas Ashfaqulla Khan was a devout Muslim. They were so devoted to the cause of the nation that their religion did not come in the way of their firm resolve to join together for the freedom struggle.

Their friendship was so strongly fastened that they always moved together, ate together and worked together. They were called two bodies but one soul. An incident in this connection is worth mentioning. Once Ashfaq had severe fever and under the very high temperature he was muttering Ram, my dear Ram. Ashfaq’s parents became much perturbed and thought Ashfaq had been overpowered by some evil spirit since he was uttering the name of Ram, the Lord of Hindus. They called their neighbour. The neighbour assured them, explaining that Ashfaq was remembering Ramprasad Bismil, his friend whom he was in the habit of addressing as Ram. Bismil was called. Ashfaq’s muttering came to a stop and both embraced each other.

They formed the Hindustan Republican Association. Shachindra Nath Sanyal was the founder of this organization. Their objective was to win freedom for the country through armed revolution. The association published a manifesto called Krantikari in 1925, advocating the elimination of inequality and slavery. For the purpose of carrying out the revolution they needed money. The famous Kakori train robbery was conceived with the sole objective of getting money for carrying out their revolutionary activities. The train robbery was conceived by Ramprasad. Once while travelling from Shahjahanpur to Lucknow he noticed money bags being taken into the guard’s van and dropped into an iron safe. Ashfaq opposed the idea saying that it would be a hasty step and will expose the revolutionaries to direct attack by strong government that will use the entire machinery to crush the revolutionary activities. However, the revolutionaries decided to go ahead with the plan. Like a disciplined soldier, Ashfaq vowed to join.

On 9th August, 1925, the train from Shahjahanpur to Lucknow was approaching Kakori. Someone pulled the chain and the train stopped abruptly. Ashfaq got off the second class compartment with his friends Sachindra Bakshi and Rajendra Lahiri. The two revolutionaries fell on the guard and made him lie down on his face. Ashfaq was the strongest of the group. He entered the guard’s van and pushed the bags containing money to the ground. He dealt blows after blows on the opening of the box to open it and to take the money bags out. The group consisting of ten young revolutionaries took the money and fled. For about a month, none of the revolutionaries could be arrested but the government was determined to arrest the culprits as it was a challenge to the safety and security of the British and it could give rise to more such incidents.

On 26th September, 1925, Ramprasad Bismil was arrested. Ashfaq escaped from his home and hid in a sugarcane field. Later he managed to reach Varanasi and stayed for some time in Banaras University with the help of his friends he went to Bihar and worked there as a clerk in an engineering firm at Daltonganj. After that he went to Delhi with a plan to go abroad. In Delhi he met a Pathan friend who also hailed from Shahjahanpur and was a classmate of Ashfaq. Falling for greed of money which the British Government had announced on Ashfaq’s head, the Pathan sounded the police and the very next morning Ashfaq was also arrested.

The police charge sheeted him in the court. During the court proceedings, the Superintendent of Police who was a Muslim went to Ashfaq’s jail room and tried to break him from the revolutionaries. The SP said, “Ashfaq, I am also a Muslim. I am very sorry for your arrest. I can have you released if you accept my advice. You become government approver and give testimony against Ramprasad Bismil. He is a Hindu and wants to establish the rule of Hindus. You should not be with him”. Ashfaq got enraged to hear the words of the Muslim SP and retorted, “I warn you, never utter such unholy words from your mouth. Ramprasad is my brother. I would rather die under the rule of Hindus than to live under the British rule”.

A committee consisting of eminent lawyers like Moti Lai Nehru, Jawaharlal Nehru, Sriprakasha, Acharya, Narendra Dev, Govind Vallabh Pant and Chandra Bhanu Gupta was formed to defend the revolutionaries in the Kakori train robbery case. Their effort to save the revolutionaries, however, failed in the court of justice under the British rule which sentenced to death Ramaprasad Bismil, Ashfaqulla Khan, Rajendra Lahiri and Roshan Singh. The others were given life sentences.

The whole country protested against the death sentences. Petitions were made to the Viceroy to reduce their death sentence into life imprisonment. Even the Privy Council was also approached but all in vain, the British could not be moved down.

On 19th December, 1927, Ashfaqulla Khan was hanged to death at district jail, Faizabad. When Ashfaq was brought to gallows he said, “My hands are not soiled with the murder of man, God will give me justice.” He then prayed to the almighty and went down the plank on which he stood after the hangman’s noose came around his neck.