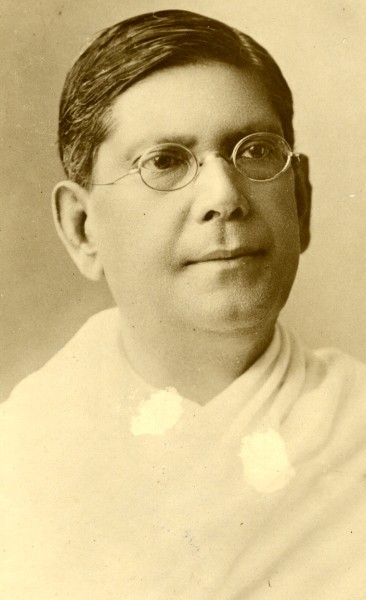 Chittaranjan Das whose life is a landmark in the history of India’s struggle for freedom was amiably called ‘Deshbandhu’ (Friend of the country). He belonged to an upper middle class Vaidya family of, Telirbagh of the then Dacca district. A fervent member of the Brahma Samaj. He was also well-known for his intellectual and journalistic pursuits for the sole object of attaining freedom.

Chittaranjan Das was born on 5th November, 1870 in Calcutta. Das descended from a family of ‘vaidyas’ (physicians). His father, Bhuben Mohan Das, was a lawyer and journalist. His mother’s name was Nistarini Devi.

After receiving his early education at the London Missionary Society’s Institution at Bhowanipore (Calcutta), Chittaranjan passed the entrance examination in 1885 as a private candidate. He graduated from the Presidency College in 1890. He then went to England to complete for the ICS, but he was ‘the last man out’ in his career. Therefore, he joined the Inner Temple and was called to the bar in 1894. Das developed a logical mind owing to his father and a liberal outlook and a deep sense of hospitality owing to his mother. As a child, Das was deeply imbued with patriotism and recited patriotic poems. Das developed a keen interest in Bengali literature and read most works of Bankim Chandra Chatterjee and Rabindranath Tagore.

He started practicing in the Calcutta High Court and had the opportunity to defend national workers like Bipin Chandra Pal and Aurobindo Ghosh. In 1907, he appeared as the defence lawyer of Brahma (Bhadhav) Upadhyaya and Bhupendranath Dutta who were prosecuted for sedition. His abilities as an advocate evoked general admiration, though he did not succeed in baffling the prosecution. The turning point in his career came when he was called upon to appear on behalf of Aurobindo Ghosh in the Alipore Bomb Case (1908). Nobody was ready to defend Ghosh except Chittaranjan Das. The entire trial lasted for 126 days, 200 witnesses were examined, 4000 paper exhibits and 500 material exhibits in the form of bombs and explosives were filed in the case. Das’s concluding statements alone lasted for 9 days. Aurobindo Ghosh was acquitted. Das accepted no fee for defending Ghosh; in fact he incurred a heavy loss of Rs.15000 by the time the case was finalized. It was due to his brilliant handling of the case that Aurobindo was ultimately acquitted. This case brought Das to the forefront professionally and politically. Chittaranjan was also the defence counsel in the Dacca Conspiracy Case (1910-11). He was famed for his handling of both civil and criminal law.

In 1917,-Das came to the forefront of nationalist politics and was invited to preside over the Bengal Provincial Conference held at Bhowanipore. At the Conference, Chittaranjan gave in Bengali his memorable presidential speech, animated by lofty idealism and patriotic fire. Chittranjan’s political career was brief but meteoric. In course of only eight years (1917-25), he rose to all-India fame by virtue of his ardent patriotism, sterling sincerity and oratorical power. His advent into politics in 1917 took place at a crucial moment. In 1918, both at the Congress special session in Bombay and Annual Session in Delhi, Das opposed the scheme of Montague Chelmsford Reforms as wholly inadequate and disappointing. The demand for Provincial Autonomy was successfully propounded in the teeth of vehement opposition from Mrs. Besant and others. In 1919, Chittaranjan went to Punjab as a member of the non-official Jallianwala Bagh Enquiry Committee. At the Amritsar Congress (1919), he made the first advocacy of obstruction while opposing the idea of cooperation with the Government in the implementation of the 1919 Reforms.

In 1920, at a special session of the Congress held at Calcutta presided over by Lajpat Rai, Gandhiji announced his famous programme of Non-Cooperation. Das moved a resolution declaring the reforms ‘inadequate, unsatisfactory and disappointing.’ He appealed to the Government to make a conscientious effort for setting up a more responsible government in India. The Congress accepted Das’s resolution with a few amendments. He, however, had the support of Pal, Malaviya, Jinnah and Mrs. Besant. Three months later the Congress met at Nagpur where he, however, accepted Gandhiji as leader. Das declared that he would give up his practice to set an example for the people. Das played an important role in the boycott of the arrival of Prince of Wales in Calcutta on 17th November, 1920. When the Prince stepped into the city, he found it deserted.  He organized the Congress Volunteers Corps for effectively implementing Congress programmes. He enrolled one crore volunteers to raise Rs.1 crore for the Tilak Swaraj Memorial Fund. The volunteers were involved in picketing Government offices, shops selling foreign goods and liquor shops. They were also involved in selling khaddar. This led to an unprecedented mass awakening. Besides the Non-cooperation Movement, the large-scale exodus of the coolies from the Assam tea garden and the strike of the Assam-Bengal railway employees engaged his attention in 1921.

Not only was he an astute lawyer but also a man with literary taste. He authored works like Mala and Antaryami (poems expressing religious spirit and devotion) and Kishore Kishori (poem expressing the eternal love between Lord Krishna and Radha). Along with Aurobindo Ghosh, he founded the famous journal Bande Mataram. He was also the Editor, in Chief of the journal ‘Forward’, a mouthpiece of the Swaraj Party. The fallout of the boycott of colleges resulted in many students with no educational institution for study. Das set up the Bengal National College to fulfill the demands of the students. In December 1921, Das was arrested. While getting into the police car Das told the crowd, “Men and women of India, this is my message to you, victory is in Sight if you are prepared to win it through suffering.” Conches were blown and flowers showered On Deshbandhu (literally as friend of the nation) as he was fondly called for the sacrifices he made for the freedom struggle, as the police car started. Deshbandhu was first imprisoned in the Presidency Jail and was shifted to the Central Jail where many of his followers were imprisoned. Deshbandhu founded the Swaraj Party in, 1923, along with Motilal Nehru for maintaining continued participation in Legislative Councils. The party was soon recognized as the Parliamentary wing of the Congress. In Bengal, many of the candidates fielded by the Swaraj Party were elected to council. The Governor invited Deshbandhu to form a government but he declined. The party came to be a powerful opposition in the Bengal Legislative Council and inflicted defeats on three ministries.

The Calcutta Municipal Act of 1923 was a major landmark in the history of local self-government in India. The Swarajists were elected to the Calcutta Corporation in a majority in 1924. Deshbandhu was elected Mayor and Subash Chandra Bose was appointed Chief Executive Officer. After giving up his legal practice, Deshbandhu went from a richest man in Calcutta to poorest. His liabilities amounted to one lakhs rupees. The only asset he had was his huge building in Calcutta which he wanted to gift to the nation. Deshbandhu set up a fund, which was later made the Deshbandhu Memorial Fund through Gandhiji intervention to clear his liabilities, built a temple, established an orphanage and provide education to the masses. The total amount collected by the fund amounted to eight lakhs rupees. Deshbandhu home was converted into a hospital for women and is called Chittaranjan Seva Sadan.

With the legalization of the oppressive Bengal Ordinance, which authorized arrest of the individuals suspected of terrorism without probable cause, the struggle with the Government became more intense. Das had returned with a high fever from the Belgaum Congress Session of 1925. When he heard that the ordinance was to be legalized on 7th January, 1925, Deshbandhu declared from sickbed, “The Black Bill is coming up for discussion. I must attend at any cost and oppose it.” He was taken to the Council on a stretcher attended by two doctors. The bill was defeated.

Chittaranjan passed away on 16th June, 1925 at Darjeeling at the age of 55. Great as a jurist, Chittaranjan was the greatest and most dynamic leader of the then Bengal. On Deshbandhu death, Subash Chandra Bose said, “The death of Deshbandhu… was for India a national calamity… .”