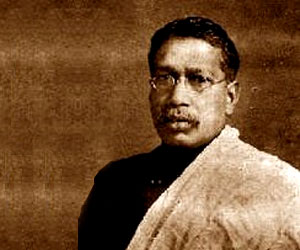 Teacher, journalist, writer and librarian, Bipin Chandra Pal started as a supporter of Brahma Samaj, turned to Vedanta and ended up as an upholder of the Vaishnava philosophy of Sri Chaitanya. A man of undaunted spirit, Bipin Chandra Pal made no compromise in the sphere of politics when it was a question of conviction and conscience. He revolted against the evils and abuses of the Hindu society at a very early stage of his life.

Bipin Chandra Pal was born on 7th November, 1858, in Sylhet in a wealthy Hindu Kayastha family. His father Ramchandra Pal, a village zamindar and a prominent member of the Sylhet Bar, was influenced by Hindu rituals and Islamic thought, though he was a follower of Vaishnavism. The only son of his parents, Bipin Chandra Pal took his early education from a Maulvi in Sylhet town. He had his formal education at Sylhet Government High School from where he passed the entrance examination. He then got himself admitted in the Presidency College, but gave up his studies before graduation.

He started his career as a headmaster of a high school in early 1879 and served in this capacity in different schools in and outside Sylhet. For some time (1890-91), he worked as the librarian and secretary of the Calcutta Public Library. While in Calcutta, during his student life, he came in contact with some prominent revolutionaries like Keshab Chandra Sen, Shibnath Shastri and Bijoy Krishna Goswami. Under the influence of Keshab Chandra Sen, he was attracted to the Brahma, Movement. Bijoy Krishna Goswami also tremendously influenced his spiritual ideas. His association with Sivanath Shastri made him conscious of the, spirit of social revolt and patriotism.

Bipin Pal was inspired by Surendranath Banerjee to take part in active politics however, he soon became a convert to the extremist ideas of BG Tilak, Lajpat Rai and Aurobindo Ghosh, though he could not accept Tilak’s concept of Hindu nationalism.zBipin Chandra Pal was associated with the progressive force of the Congress since 1885 and attended the second and the third annual sessions of the Congress held in Calcutta and Madras in 1886 and 1887 respectively. He prevailed upon the Congress to take up the cause of the Assam Tea-garden labourers who were treated by the owners.

Bipin Pal went to study comparative theology in England in 1898, but after a year came back to India and started preaching the ideal of Swaraj (complete independence) through his weekly journal ‘The New India.’ Imbued with great patriotic zeal, he devoted himself to the freedom movement of India. He presided over the Bombay Session of the Indian National Congress in 1904. Following the partition of Bengal in 1905, Bipin Pal started a daily paper ‘The Bande Mataram’ and became its Chief Editor. He firmly stood against the partition of Bengal on the ground that it was a calculated move of the government to split the Bengalis. With a view to enlisting the mass support behind the anti-partition campaign, Bipin Pal along with other anti-partitionists, organized propaganda tour in various parts of Bengal, Assam, UP and Madras.

Pal was one of the architects-of the Swadeshi Movement, which swept over India during the days following the partition of Bengal. He suffered imprisonment for six months in 1907 for his refusal to give evidence against Aurobindo Ghosh in the so-called Bande Mataram Sedition Case. On his release, Pal went to England in 1908 ‘to lead the life of an enforced exile’ and stayed there for three years. After the First World War, he visited England for the third time in 1919 as a member of the Home Rule League deputation led by Tilak. He presided over the Bengal Provincial Conference held at Barisal in 1921. He was not involved in the Non-cooperation Movement because it was merged with the Khilafat cause and criticized the Bengal Pact (1923) of Chittaranjan Das. He did not agree with the views of Maulana Mohammad Ali on the nature of the communal problem in India (1920-25). From 1925 onwards, he, however, retired from active politics.

Described as ‘one of the mightiest prophets of nationalism,’
Bipin Chandra Pal was associated with India’s political history during its phase of the struggle for freedom with Bal Gangadhar Tilak and Lala Lajpat Rai. The trio was termed the ‘extremists’ as they stood for the ideal of Swaraj or complete political freedom to be achieved through courage, self-help and self-sacrifice.

Teacher, journalist, writer and librarian, Bipin Chandra Pal started as a supporter of Brahma Samaj, turned to Vedanta and ended up as an upholder of the Vaishnava philosophy of Sri Chaitanya. He was an ardent social reformer; he married a widow of a higher caste twice in his life and gave his powerful support to the Age of Consent Bill of 1891. He started the Bangla weekly Paridarshak in Sylhet (1886). He worked as Assistant Editor of the Bengali Public Opinion (1882) and served the Lahore Tribune for a short time (1887). For some time he was the editor of ‘The Democrat’ and ‘The Independent’. He published a biography (in Bangla) of Queen Victoria in 1887. Among his other books, Indian Nationalism, Nationality and Empire, Swaraj and the Present Situation, The Basis of Social Reform, The Soul of India, The New Spirit and Studies in Hinduism are prominent.

A man of undaunted spirit, Bipin Chandra Pal made no compromise in the sphere of politics when it was a question of conviction and conscience. He revolted against the evils and abuses of the Hindu society at a very early stage of his life. He championed the cause of Indian education with special emphasis on female education and advocated the equality in male and female. He occupies a unique place in the history of the freedom     movement of India. He died in Calcutta in 1932.