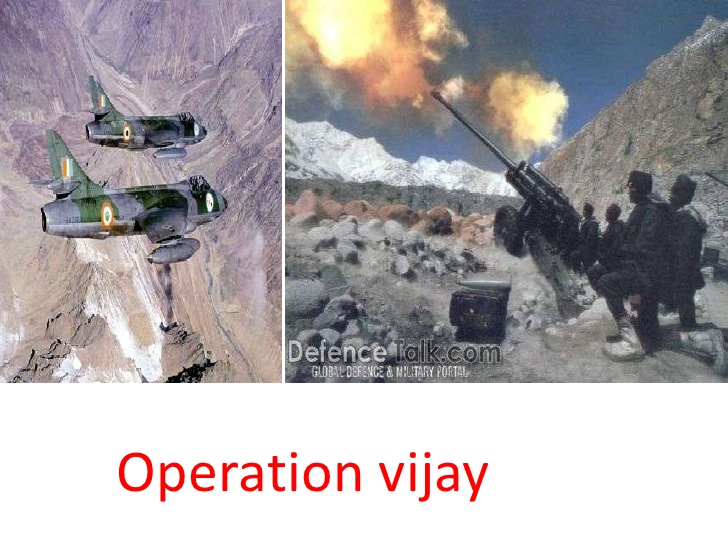 As soon as the Government came to know, that thousands of Pakistani intruders have crossed the LoC (Line of Control) and perched themselves on strategic heights six to seven kilometers inside Indian territory in Kargil sector of Jammu and Kashmir, the government realized the seriousness of the matter and an operation Vijay was launched to flush out the infiltrators from the Kargil sector”.

On 6th May, 1999, an Indian army patrol party first noticed some unusual movements in the Batalik sector. The extent of intrusion was discovered the next day itself when a second patrol party was sent to the area. By May 10-14, 1999, the Pakistani intruders were well into the Drass, Kaksar, Mashkoh and Batalik sectors, hazardously threatening the safety of Srinagar-Leh highway, the virtual line of communication.

This was the third time in the history of independent India that Pakistan tried to occupy the Kashmir by assisting or backing the infiltrators. The first time just after independence, a second time in 1965 as part of operation Gibraltar that led to Indo-Pak second war and now the third time through Kargil.

It was on 16th May, the Indian army launched counter insurgency operation and succeeded in forcing the Pakistan backed intruders to flee from one of the ridgelines in the Kargil sector. Reinforcements were sent from the 15th Corps to the affected area, but the area couldn’t be fully cleared of the infiltrators.

The ‘Operation Vijay’ was launched on 26th May, 1999 to clear of the area fully from the infiltrators backed by the Pak army. The actions were limited to the Indian side of LoC, as stated officially. “This is the start of operations and they would continue till our defence forces occupy our territory. Any escalation of conflict will be entirely the responsibility of Pakistan”, added further.

Pakistan’s Prime Minister Mr.. Nawaj Sharif said, “A war on the subcontinent could not be ruled out”. This was later retracted by Mr. Mushahid Hussain, the Information Minister of Pakistan. The war seemed imminent Mr. Vajpayee, the Prime Minister of India, admitted on 31st May, that war like situation had developed in Kargil-sector, something like what had happened 52 years ago.

With the launching of Operation Vijay, the question on everybody’s tongue was, how much time Indian Army would take to push back the intruders from the Kargil sector? Many experts opined to take at least six months to clear the area from Pak infiltrators and after six months there would be severe winter with snow all around in the sector, being part of Himalaya’s range, but Indian forces stunned the world by pushing the intruders beyond the LoC within a period of just 50 days. Operation Vijay have been a magnificent success.

Within three days of launching of operation Vijay, about 400 intruders were flushed out of the Indian Territory. Indian Air force played very crucial role in the ‘Kargil war by striking at the forward supply bases and the rear side of bases of Pakistani backed intruders. The task indeed was frightening as the intruders took over in a very difficult mountain terrain. It was very challenging that the IAF had further to see that the air strikes were limited to Indian side of LoC only, since it was not allowed to be extended to a fully fledged war, so air strikes were limited to cut off the infiltrator’s links of supply and IAF had to restrain itself from violating Pak side of the LoC.

Ever since the Operation Vijay began, the intruders and the Pakistani troops were forced to surrender one post after another in Kargil. After consolidating its hold in the Tololing area in Drass sector on 15th June, 1999, the Indian army started moving ahead slowly in Balatic and Drass sector blocking the supply line, wherever required and at several places one to one battles were also fought. As per an official report, there were approximately 900 Pakistani intruders in Kargil Drass sector as on 17th June, 1999.

The IAF used fire power of Mirage-2000 to flatten the 14600 ft high Munthodhalo supply camp and it could well pulverize the 80 odd structures built by the enemy with 500 pounds bombs. Mirage -2000 used also as vigilance Aircraft, while the other planes did their job.

General Josef Bali, the UN observer in Srinagar confirmed on 19th June, 1999, that heavily- armed Afghan warriors had crossed over the LoC. There is a lot of indication that former Afghan fighters from the war against Russia are now fighting here. Weapons provided for Afghanistan with large help from the Americans and the CIA is now in the hands of militants. General Bali also appealed to the big powers, “not to sit back and let this situation play out”. The entire Tololing Ridge in the Drass subsector was cleared off intruders and Pakistani forces up to 20th June, 1999 by the Indian armed forces and it was a matter of exhilaration for Indian side. The Chief of Army Staff Gen VP Malik said on 23rd June, 1999, that Indian troops could cross the LoC provided there was a political mandate. He asserted that Pakistani army had conceived, planned and executed the Kargil attack and that the severing of the road between Zojila pass and Leh and exerting pressure on Indian defenses in Kargil, Batalik and Turtuk sectors was the Prime focus of the Pakistani operations. The Army Chief said that details of the LoC alignment and, the process of delineation had been well documented and signatures to these  records had been affixed by top army officers of the two countries in 1972.

In another major strike, the Indian army captured nearly 16000 ft Jubar Hill in the Batalik sector on 7th July, 1999, even as government refused any kind of safe passage to the Pakistani armed intruders in Kargil. The recapture of both the Jubar Hill and, the Tiger Hill would also mean deprivation of any mischievous act by the enemy in creating a wedge between North and South of the Indus River in this area. The immense use of artillery, the Multi Barrel Rockets, the Bofors Howitzers and our field guns played decisive role in the ‘ capture of Tiger and Jubar Hills by the Indian Army.

By 9 July, ninety per cent of the Batalik sector was cleaned of the Pakistani intrusion. Up to then about 661 Pakistani soldiers had been killed, while on the Indian side the toll was 321 and 476 injured.

With mounting pressure of the world and regular march of the Indian Army climaxed by the fall of Tiger Hills and the stark refusal of the US President, Mr. Bill Clinton to rescue Mr. Nawaz Sharif from the position where he had been cornered by his own betrayal of the Lahore agreement, the Kargil misadventure, forced Pakistan to call off its support to the intruders and its own army. Pakistan tried its best to garner the support of USA and the China, but drew a blank. None could be convinced by the Pakistan’s concocted story and calling the intruders, Kashmiri freedom fighters. On 4th July, 1999, Pakistan agreed to withdraw its forces from the Indian side of the LoC. A joint Statement issued in Washington at the end of prolonged meeting between President Bill Clinton and the Pakistani Prime Minister Nawaz Sharif, made it clear that concrete steps will be taken for the restoration of the LoC in accordance with the Shimla Agreement.

As part of the diplomatic effort to canvass more support for his country, the Pakistani Prime Minister had a stopover in London where he met the British Prime Minister Mr. Tony Blair, who too turned down the idea of third party mediation and asked Pakistan to withdraw its army from the Indian side of the LoC and try to resolve the issue bilaterally.

During all these Pakistan’s diplomatic overtures, India had been taking every step with great caution and firmness. It declined bluntly an invitation from President Bill Clinton for talks in Washington when the Pakistani Prime Minister was already there; India made its stand very clear, no third party mediation in Kashmir or Kargil.

Without mincing words, India’s Prime Minister and Home Minister asserted that, India would continue its military operations and would not allow any foreign mercenary to remain on its soil till the last of the intruders is flushed out of the Indian territory.

On 11th July, Pakistan agreed to declare 16th July, as deadline for complete withdrawal of its Army regulars and other intruders. Pakistan bows to India’s demand that its forces must withdraw to well north of the LoC in the Kargil sector by the deadline of July 16, morning. On 13th July, Indian troops recaptured the strategic Bajrang post in the Kaksar subsector and on 14th July (50th Day) Pakistan virtually withdrew all its forces from the Indian side of LoC. It was a record win, a scintillating success for the Indian forces, to complete the operation Vijay within a record time of merely 50 days. Every inch of the territory was recovered. Long live the Martyrs who laid their lives in this most successful Operation Vijay.