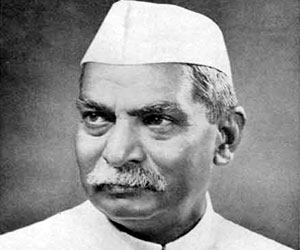 The First President of Free India

Dr Rajendra Prasad, son of Mahadev Sahai, was born in Zeradei, Bihar, on 3rd December, 1884. Being the youngest in a large joint family Rajen was greatly loved. He was strongly attached to his mother and elder brother Mahendra. In Zeradei’s diverse population, people lived together in considerable harmony. Rajendra Prasad’s earliest memories were of playing ‘kabaddi’ with his Hindu and Muslim friends alike. In keeping with the old customs of his village and family, Rajen was married when he was barely 12 years old to Rajvanshi Devi.

Rajen was a brilliant student; standing first in the entrance examination to the University of Calcutta, he was awarded a  Rs.30/month as scholarship. He joined the famous Calcutta Presidency College in 1902. His scholarship, ironically, would pose the first test of his patriotism. Gopal Krishna Gokhale had started the Servants of India Society in 1905 and asked Rajen to join. So strong was his sense of duty toward his family and education that he, after much deliberation, refused Gokhale. But, the decision would not rest easy on him. Rajen recalled, “I was miserable” and for the first time in his life, his performance in academia declined and he barely cleared his law examinations.

Having made his choice, however, he set aside the intruding thoughts, and focused on his studies with renewed vigour. In 1916, Rajen passed the Masters in Law examination with honours, winning a gold medal. Subsequently, he completed his Doctorate in Law as well.

As an accomplished lawyer, however, Rajen realized it would be only matter of time before he would be caught up in the turmoil of the fight for independence. While Gandhiji was on a fact finding mission in Champaran district of Bihar to address grievances of local peasants, he called on Rajendra Prasad to come to Champaran with volunteers, Dr Prasad rushed to Champaran. Initially, he was not impressed with Gandhiji’s appearance or conversation. In time, however, Dr Prasad was deeply moved by the dedication conviction and courage that Gandhiji displayed. Here was a man alien of the parts who had made the cause of the people of Champaran his own. Dr Prasad decided that he would do everything and could help with his skills as a lawyer and as an enthusiastic volunteer.

Gandhiji’s influence greatly altered many of Dr Prasad’s views, most importantly on caste and untouchability. Gandhiji made Dr Prasad realize that the nation, working for a common cause, “Became of one caste, namely co-workers.” Dr Prasad reduced the number of servants he had to one and sought ways to simplify his life. He no longer felt shame in sweeping the floor, or washing his own utensils and other tasks he had all along assumed others would do for him.

Whenever the people suffered, Dr Prasad was present there to help and reduce their pain. In 1914, floods ravaged Bihar and Bengal. Dr Prasad became; a volunteer distributing food and cloth to the flood victims. In 1934, Bihar was shaken by an earthquake which caused immense damage and loss of property, The quake devastating by itself, was followed by floods and an outbreak of malaria which heightened misery. Dr Prasad devoted himself to relief work, collecting food, clothes and medicine. His experiences here led to similar efforts elsewhere too. In 1935, an earthquake hit Quetta but Dr Prasad was not allowed to lend a hand because of restrictions posed by the Government. Nevertheless, he set up relief committees in Sindh and Punjab for the homeless victims who flocked there.

Dr Prasad called for non-cooperation in Bihar as part of Gandhiji’s Non-cooperation Movement. Dr Prasad gave up his law practice and started a National College near Patna. The college was later shifted to Sadaqat Ashram on the banks of the Ganga. The Non-Cooperation Movement in Bihar spread like wildfire. Dr Prasad toured the State—holding one public meeting after another, collecting funds and galvanizing the nation for a complete boycott of all schools, colleges and Government offices. He urged the people to take to spinning and wear only khadi. Bihar and the entire nation were taken by storm, the people responded to the leaders, call. The machinery of the mighty British Raj was coming to a grinding halt.

The British India Government utilized the one and only option at its disposal—to use force. Mass arrests were made Lala Lajpat Rai, Jawaharlal Nehru, Deshbandhu Chittranjan Das and Maulana Azad was arrested. Then peaceful Non-cooperation turned to violence in Chauri Chaura, Uttar Pradesh. In the light of the events at Chauri Chaura, Gandhiji suspended the Civil Disobedience Movement. The entire nation was hushed. A murmur of dissent began within the top brass of the Congress. Gandhiji was criticized for what was called the ‘Bardoli retreat.’

Dr Prasad stood by his mentor, seeing the wisdom behind Gandhiji’s actions. Gandhiji did not want to set a precedent of violence for free India. In March 1930, Gandhiji launched the Salt Satyagraha. He planned to march from Sabarmati Ashram to Dandi seashore to break the salt laws. A Salt Satyagraha was launched in Bihar under Dr Prasad. Nakhas Pond in Patna was chosen as the site of the Satyagraha. Batch after batch of volunteers courted arrest while making salt. Many volunteers were injured. Dr Prasad called for more volunteers. Public opinion forced the Government to withdraw the police and allow the volunteers to make salt. Dr Prasad then sold the manufactured salt to raise funds. He was sentenced to six months imprisonment.

His service on various fronts of the movement for independence raised his profile considerably. Dr Prasad presided over the Bombay Session of the Indian National Congress in October 1934. Following the resignation of Subhash Chandra Bose as the President of the Congress in April 1939, Dr Prasad was elected as President. He did his best to heal the rifts created between the incompatible ideologies of Subhash Chandra Bose and Gandhiji. Rabindranath Tagore wrote to Dr Prasad, “I feel assured in my mind that your personality will help to soothe the injured souls and bring peace and unity into an atmosphere of mistrust and chaos…”

As the freedom struggle progressed, the dark shadow of communalism which had always lurked in the background steadily grew. To Dr Prasad’s dismay, communal riots began spontaneously all over the country. He rushed from one scene to another to control the riots. Independence was fast approaching and so was the prospect of partition. Dr Prasad, who had such fond memories of playing with his Hindu and Muslim friends in Zeradei, now had the misfortune of witnessing the nation being ripped into two.

In July 1946, when the Constituent Assembly was established to frame the Constitution of India, Dr Rajendra Prasad was elected its President. Two and a half years after independence, on 26th January, 1950, the Constitution of independent India was ratified and Dr Rajendra Prasad was elected the nation’s first President. Dr Prasad transformed the imperial splendor of Rashtrapati Bhavan into an elegant ‘Indian’ home. Dr Prasad visited many countries on missions of goodwill, as the new state sought to establish and nourish new relationships. He stressed the need for peace in a nuclear age.

In 1962, after 12 years as President, Dr Prasad retired and was awarded the Bharat Ratna, the nation’s highest civilian award. With the many tumults of his vigorous and accomplished life, Dr Prasad authored many books including his autobiography ‘Atmakatha’ (1946), ‘Satyagraha at Champaran’ (1922), ‘India Divided’ (1946), ‘Mahatma Gandhi and Bihar, Some Reminiscences’ (1949), and “Bapu Ke Kadmon Mein” (1954). After spending a few months of his life in retirement at Sadaqat Ashram Patna, he died on 28th February, 1963.