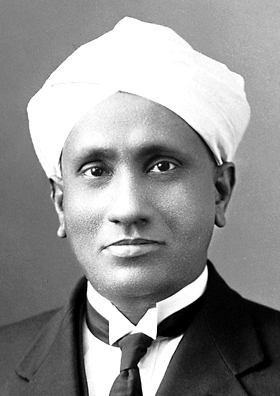 “Chandrashekhar Venkata Raman was the first Asian scientist to win the Noble Prize. He was a man of immense curiosity and a lively sense of humour with spirit of inquiry and devotion to science. He laid the foundations for scientific research in India. And he won honour as a scientist and affection as a teacher and a genius.”

Chandrashekhar Venkata Raman was born at Trichinopoly in South India on 7th November, 1888. His father was a lecturer of Mathematics and Physics and so from the very beginning, he was nourished in an academic atmosphere. He entered Presidency College, Madras in 1902, passed his BA examination in 1904, winning the first place and the gold medal in Physics; in 1907, he got his MA degree, obtaining the highest distinctions. On 6th May, 1907, Raman married Lokasundari Ammal.

His earliest researches in optics and acoustics—the two fields of investigation to which he dedicated his entire career—were carried out while he was a student. At that time a scientific career did not appear to present the best possibilities, and so Raman joined the Indian Finance Department in 1907. Though the duties of his office took most of his time, Raman found opportunities for carrying on experimental research in the laboratory of the Indian Association for the Cultivation of Science at Calcutta (of which he became Honorary Secretary in 1919).

In 1917, he was offered the newly endowed Palit Chair of Physics at Calcutta University and decided to accept it. After 15 years at Calcutta he became Professor at the Indian Institute of Science at Bengaluru (1933-1948) and since 1948, he had been Director of the Raman Institute of Research at Bengaluru, established and endowed by him. He also founded the Indian Journal of Physics in 1926, of which he was the editor. Raman sponsored the establishment of the Indian Academy of Sciences and has served as President since its inception. He also initiated the proceedings of that academy, in which much of his works were published and was President of the Current Science Association, Bengaluru, which publishes, Current Science (India).

The works of the German scientist Helmholtz (1821—1891) and the English scientist Lord Raleigh (1842—1919) on acoustics (the study of sound) influenced Raman. He took immense interest in the study of sound. When he was 18 years of age, one of his research papers was published in the ‘Philosophical Magazine’ of England. Later another paper was published in the scientific journal ‘Nature’. One evening Raman was returning from his office in a tramcar. He saw the name plate of the ‘Indian Association for the Cultivation of Science’ at 210, Bow Bazaar Street. Immediately, he got off the tram and went in. Dr Amritlal Sircar was the Honorary Secretary of the Association. There were spacious rooms and old scientific instruments, which could be used for demonstration of experiments. Raman asked whether he could conduct research there in his spare time. Sircar gladly agreed. Raman took up a house adjoining the Association. A door was provided between his house and the laboratory. During the daytime, he attended his office and carried out his duties. His mornings and nights were devoted to research. This gave him full satisfaction. So, he continued his ceaseless activities in Calcutta.

Some of Raman’s early memoirs appeared as Bulletins of the Indian Association for the cultivation of Science (Bull 6 and 11 dealing with the maintenance of vibrations; Bull 15, 1918 dealing with the theory of the musical instruments of the violin family). He contributed an article on the theory of musical instruments to the 8th Volume of the Hand book of Physics, 1928. In 1922, he published his work on the  ‘Molecular Diffraction of Light’, the first of a series of investigations with his collaborators which ultimately led to his discovery, on the 28th February, 1928, the radiation effect which bears his name (‘A new radiation’, Indian J Phys, 2 (1928) 387), and which gained him the 1930, Nobel Prize in Physics. He was elected a Fellow of the Royal Society early in his career (1924) and was knighted in 1929.

Other investigations carried out by Raman were: his experimental and theoretical studies on the diffraction of light by acoustic waves of ultrasonic and hypersonic frequencies (published during 1934-1942), and those on the effects produced by X-rays on infrared vibrations in crystals exposed to ordinary light. In 1948 Raman, through studying the spectroscopic behaviour of crystals, approached in a new manner fundamental problems of crystal dynamics. His laboratory had been dealing with the structure and properties of diamond, the structure and optical behaviour of numerous iridescent substances (labradorite, pearly felspar, agate, opal, and pearls). Among his other interests were the optics of colloids, electrical and magnetic anisotropy and the physiology of human vision. Raman had been honoured with a large number of honorary doctorates and memberships of scientific societies. Sir Venkata Raman died in 1970.