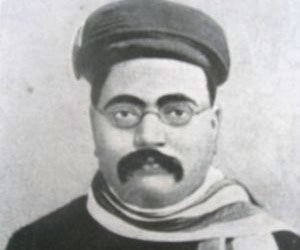 “Gopal Krishna Gokhale, noted freedom fighter, was one of the first to emphasize the need for mass education. He devoted a lot of his spare time for the causes of the common man: famine, plague relief measures, local self-government, land reform and communal harmony.

Gopal Krishna Gokhale was born on 9th May, 1866 at Katulk in Ratnagiri in Maharashtra, on 9th May, 1866. Gopal Krishna Gokhale was raised in the home of his maternal grandfather. This village was not too far from Tamhanmala, the native town of his father, Krishna Rao, a farmer by occupation who was forced to work as a clerk due to the poor soil of the region. His mother, Valubai, also known as Satyabhama, was a simple woman who instilled in her children the values of religion, devotion to one’s family and caring for one’s fellow men. The economic condition of the family was so bad that on his father’s death, he could continue his studies only because his elder brother sacrificed his own education.

Gokhale learned the value of self-sacrifice to avoid asking for more material support. At times, he went without meals and studied under the light of street lamps to save for his elder brother as much money as possible. A hardworking student, he moved on to college and graduated from Elphinstone College, Bombay in 1884, at the age of 18 earning a scholarship of Rs.20 per month in his final year. His education influenced his life in many ways. Primarily, his understanding of the English language allowed him to express himself without hesitation and with utmost clarity. Also, his appreciation and knowledge of history instilled in him a respect for liberty, democracy and the Parliamentary system.

After graduation, he moved on to teaching and took a position as an Assistant Master in the New English School in Pune. Among many achievements which testify to his talent and passion for teaching, perhaps the greatest of them was a compilation, a book of Arithmetic in collaboration with a colleague, N J Bapat which was a widely used and translated text-book across the country. Gokhale moved on to become a founding member of Fergusson College in Pune in 1885, with colleagues in the highly honoured Deccan Education Society. He pledged twenty years of his life to this college, as a teacher and board member. So, apt was he at teaching subjects of any variety that he was known as the ‘Professor to Order.’

In 1886, when he was just 20, he delivered a public address concerning ‘India under the British Rule’ and was applauded for his expression and command over English language, thus, he took entry in public life, and a change in his outlook began. Gokhale soon moved on to managing public affairs. While contributing articles to the English weekly Mahratta, he thought using education as a means to awaken patriotism among the people of India. Just as this idea was enveloping, Gokhale was promoted as Secretary to the Deccan Education Society. Once in the limelight, there was no looking back. After being given charge of the Bombay Provincial Conference in 1893, he was elected to the Senate of the Bombay University. In time, Gokhale came to devote all his spare time to the causes of the common man— famine, plague relief measures, local self-government, land reform and communal harmony. As a member of the Pune Municipality, twice elected its President, Gokhale continued to strive to solve the problems of the poor and those who came to him with grievances concerning water supply, drainage, etc were pleased with the practical manner in which he dealt with the problem. Gokhale also published a daily newspaper entitled Jnanaprakash which allowed him to voice his reformist views on politics and society.

In 1905, he founded the Servants of India Society, which trained people to be selfless social workers so they could work for the common good of the people. So, strong was the desire to make a difference that these kindred spirits vowed a simple life of dedication to these causes. Among many things the organization did, there were the commendable services of helping victims of floods and famines and taking the time to educate women in society, so that they too may stand with a voice.

Gokhale was greatly influenced by Ranade, Dadabhai Naoroji and Pherozeshah Mehta. But Ranade, whom he regarded as his master in political and public life influenced him the most. Ranade trained him for 15 years in all spheres of public life and taught him sincerity, devotion to public service and tolerance. These qualities, which Ranade helped instill in Gokhale are those qualities which helped make Gokhale the man he is known today. Immediately after his graduation, Gokhale joined the Deccan Education Society, Poona, as a life time member.

In 1908, he founded the Ranade Institute of Economics. Gokhale visited England and voiced his concerns relating to the unfair treatment to the Indian people by the British Government. In a span of 49 days, he spoke in front of 47 different audiences, captivating every one of them. Before long, he was touted as the most effective pleader for India’s cause. While Gokhale pleaded for gradual reform to ultimately attain Swaraj or self-government in India, some of his contemporaries comprising a radical element, wished to use force as a means of persuasion. Gokhale maintained his moderate political views and worked out some reforms for the betterment of India. He was instrumental in the formation of the Minto-Morley Reforms of 1909, which eventually became law. Unfortunately, the Reforms Act became law in 1909 but it was disappointing to see that the people were not given a proper democratic system despite Gokhale’s efforts.

He was a great reformer. He depreciated the caste-system and untouchability, pleaded for the emancipation of women and championed the cause of female education. In Gokhale’s opinion, the introduction of Western education in India, with its liberalizing influence, was a great blessing to the people. He was a firm believer in the theory that mass education was a prerequisite to national political consciousness. He advocated that primary education should be free in all schools throughout India at once.

As for Gokhale’s ideas on nationalism and the conduct of the nationalist movement, he sought greater autonomy for Indians who would co-operate with the government in reforms and obtain through constitutional means and by persuasion and advance over the reforms granted until, finally, India became a self-governing dominion within the British Commonwealth of Nations. While appreciating the benefits of the British rule in general, he never failed to criticize unjust policies and high-handed actions of the government.

In his opinion, the economic results of the British rule in India were absolutely disastrous resulting in frightful poverty. According to him, the greatest need of the hour in India was industrial knowhow. In agriculture, he pleaded that old methods should be changed and new techniques be adopted as much as possible. There was a crying need to introduce agricultural science and improved agricultural implements. Regarding the textile industry, Gokhale acknowledged that the handloom was doing good work and had a bright future before it, yet the main work would have to be done by machinery. He made extensive use of the public platform for communicating his ideas on social, economic and political reforms. Some of his memorable speeches were made in the Imperial Legislative Council, especially on the Annual Budgets from 1902 to 1908.

The years of hard work and devotion of Gopal Krishna Gokhale did much for India, but sadly enough it had put a bad impact on the health of the great leader. Excessive exertion and the resulting exhaustion only aggravated his diabetes and cardiac asthma. The end came peacefully, however, on 19th February, 1915. Pointing his finger toward heaven and then folding his hands respectfully, Gopal Krishna Gokhale made his final statement to an audience, a fond farewell.