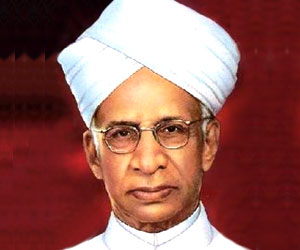 Sarvepalli Radhakrishnan was born in Tirutani on 5th September, 1888 into a poor Brahmin family. His father Sarvepalli Veeraswami was employed on a meagre salary in the work of zamindar. His mother’s name was Sitamma. It was difficult for Radhakrishnan’s father to educate him with a meagre income and a large family to take care of. Radhakrishnan went through most of his education on scholarships. He initially went to school in Tirutani and then to the Lutheran Mission School in Tirupati for High School. In 1900, he moved to Vellore College where he studied till 1904. In between 1904 and 1908, he completed his BA with honours and MA in Philosophy from Madras Christian College. He was afraid that his MA thesis, “The Ethics of the Vedanta would offend his Philosophy Professor, Dr. AG Hogg. Instead, Dr. Hogg commended Radhakrishnan on doing an excellent job. Radhakrishnan’s MA thesis was published   when   he   was   only   20.   Radhakrishnan   was   married   to Sivakamuamma at the age of 16 while staying in Vellore. Radhakrishnan accepted an assistant lectureship at the Madras Presidency College in 1909.

In the meantime, he had studied Sanskrit, Hindi and ancient works such as the Vedas and Upanishads. He joined provincial education service as an Assistant Professor of Philosophy in the same college from where he did his graduation.

In 1914, in a strange twist of fate, Radhakrishnan met Srinivasa Ramanujan, a mathematical genius. Srinivasa was leaving for Cambridge for studies and had come to seek Radhakrishnan’s blessings because a Goddess came in his dream and told him to do so before undertaking the trip. The two never met again.

He headed the Indian delegation to UNESCO a number of times between 1946 and 1950. He was the Chairman of the University Education Committee and in the Executive Board of UNESCO in 1948.

In 1949, Dr. Radhakrishnan was appointed Ambassador to the Soviet Union. The appointment raised many eyebrows because people wondered what kind of an impression Radhakrishnan, a student of idealist Philosophy, would make on Joseph Stalin, an ardent communist. In 1950, Radhakrishnan was called on to the Kremlin to meet with the Premier. This was rather irregular. He was accompanied by Indian Embassy Minister, Rajeshwar Dayal and Soviet Foreign Minister Andrei Vyshinsky and interpreter Pavlov. Radhakrishnan told Stalin “We had an emperor in India who after bloody victory renounced war and became a monk. You have waded your way to power through force. Who knows that might happen to you also.” Radhakrishnan was referring to Staling infamous ‘bloody’ purges. Stalin smiled and replied, “Yes, miracles do happen sometimes. I was in a theological seminary for five years!”

On 5th April, 1952, a few days before Radhakrishnan’s departure for India Stalin called on Radhakrishnan. Radhakrishnan records Stalin’s face being bloated. Radhakrishnan patted him on the cheek and on the back. Stalin said, “You are the first person to treat me as a human being and not as a monster. You are leaving us and I am sad. I want you to live long. I have not long to live.” Stalin died six months later. Radhakrishnan’s legacy in Moscow was a firm and friendly understanding between India and the Soviet Union. A relationship which has flourished over the years and has become even stronger.

In 1952, he was the President of UNESCO. He was a delegate to PEN Congress in 1959 and in 1962, he was made a honoured fellow of the British Academy. In May 1962, he represented Calcutta University to the Congress of Philosophy, Harvard University. He held important posts like Ambassador Extraordinary and Minister Plenipotentiary to USSR between 1949 and 1952, He received numerous honorary doctorates from universities worldwide. In June 1963, he was made Honorary Member of the Order of Merit, Buckingham Palace. He held the post of Vice-President of India from 1952 to 1962.

In 1956, Radhakrishnan’s devoted wife, Sivakamuamma, passed away after sharing 50 years of married life. The couple had five daughters and a son.

After serving two terms as Vice-President, Radhakrishnan was elected President of India in 1962. Radhakrishnan’s tenure as President was marked by the disastrous Indo-China war of 1962. During his state visit to the United States in 1963, the end of the Nehru-era with Nehru’s death in 1964, and India’s victorious performance against Pakistan in 1965 under Lal Bahadur Shastri, Radhakrishnan guided each of the Prime Ministers wisely and helped see India gets through those trying years safely. Radhakrishnan refused to continue for another term as President after his term ended in 1967.

His achievements were innumerable and this great son of India became an important figure in the field of education and politics. His birthday, the 5th of September is celebrated as Teachers’ Day throughout India.

He authored many books, such as— The Ethics of Vedanta and its Material Presupposition, The Philosophy of Rabindranath Tagore, Idealistic Views & life, Eastern Religions and Western Thoughts, Kalki or Future Civilization Indian Philosophy which are read with great respect and admiration in India and abroad.

At the age of 79, Dr Radhakrishnan returned to Madras in May 1967, to a warm home coming. He spent his last years happily at his house ‘Girija’ in Mylapore, Madras. A dynamic leader, Dr. Radhakrishnan left away leaving behind mourning India for his heavenly journey on 16 April, 1975.