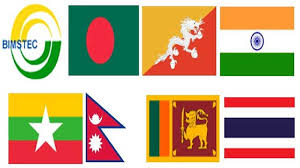 “With fast globalization of world’s Economy, BIMSTEC Agreement can be viewed as an effort to strengthen the process of economic co-operation and free trade amongst the Asian countries, for their mutual benefit”.

The agreement was signed among Bangladesh, India, Myanmar, Sri Lanka, and Thailand, on 8th February, 2004, at Phuket, (Thailand), where the Ministers of Commerce and Foreign affairs of these nations met, in the process of strengthening the trade ties and binding them into an alliance. The name BIMSTEC an acronym consists of the first letters of the countries involved,(B)Bangladesh, (I)India (M)Myanmar, (S) Sri Lanka, (T) Thailand. It was decided to include two other countries Nepal and Bhutan, the membership of the BIMSTEC would become more varied geographically.

The SAARC (South Asian Association for Regional Co-operation) was also conceived for the purpose of regional co-operation, but couldn’t deliver the expected results, due to hostile attitude of India and Pakistan; a necessity was being felt to enhance trade links, among the countries. The BIMSTEC serves the purpose.

The BIMSTEC Agreement is aimed to create a free trade zone, where tariffs would be brought down to zero by 2012. Bangladesh and Myanmar, the two least developed countries of the forum have been given extra time to drop their tariff rates to zero level by the year 2017. This agreement opens new vistas for economic and commercial links amongst the member nations. It highlights the necessity of interdependence among member nations in the presently fast globalized economy of the world. The BIMSTEC would facilitate the trade at institutional and people level. As most of the member countries are suffering from the menace of corruption, the trade links at institutional and private level are expected to positively result in enhanced trade links.

The reasons of failure of SAARC could result in the success of BIMSTEC, as most of the members of SAARC, except Pakistan, involve in BIMSTEC. The member of BIMSTEC, realize well that to benefit mutually in emerging globalization, they are to support and co-operate with each other whole heartedly. It is a fact that economic prosperity is a prior requirement for peace and tranquility in the region.

Furthermore, it is important that all the countries should strive not only for the economic co-operation, but also for the cultural and social links so that more transparent and beneficial ties could take place.

The BIMSTEC involves the countries of two regions, South and South-East Asia. With an aim of economic co-operation, exploiting the potentials available in the member nations, it provides a useful platform from political point of view.

For the nations of South Asia, it provides an alternative framework for bilateral and multilateral co-operation, other than SAARC.

The forum from BIMSTEC is largely the result of initiative, aimed at benefiting the trade links between India and other nations as well as to counter the rise of China, which has been threatening the products of Thailand. India could also counter China’s fast reaching products in the neighbouring markets with BIMSTEC. The political benefits, based on the economic co-operation, have far reaching impact and may result into closure ties.

India has emerged as rapidly fast developing economy in the world today. India had closure ties; closure links with the BIMSTEC nations in ancient times, now with this agreement, India get an opportunity to revive its past links with old partners. Moreover, with BIMSTEC, India would size an opportunity to have better trade links, more binding political relations beyond SAARC. India is the largest member nations for mutual benefit. The success of BIMSTEK depends mainly on the sincere and honest co-operation of the member nations, keeping aside the political differences, if there exist any.