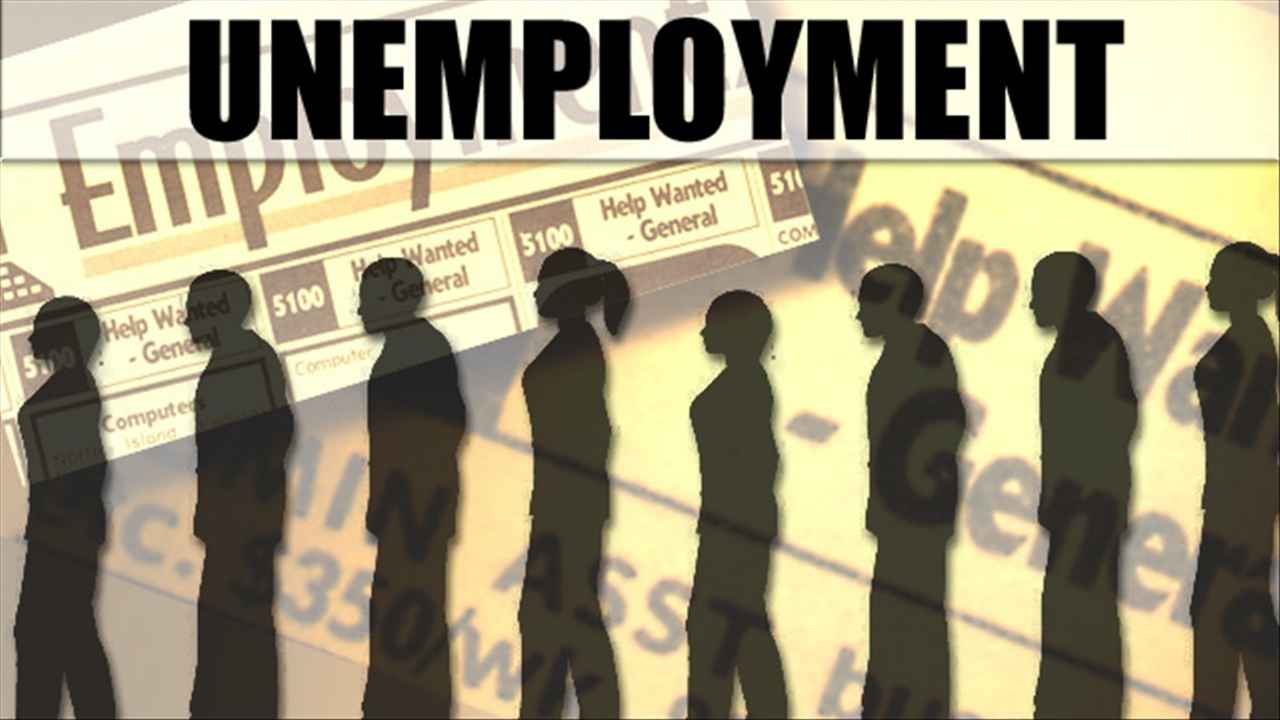 THE PROBLEM OF UNEMPLOYMENT IN INDIA

The unemployment rate in India was last reported at 9.4% in 2009/10 fiscal year. From 1983 until 2000, India’s unemployment rate averaged 7.20% reaching a historical high of 8.30% in December of 1983 and a record low of 5.99% in December of 1994. The labour force is defined as the number of people employed plus the number unemployed but seeking work. The non labour force includes those who are not looking for work, those who are institutionalized and those serving in the military.

India’s problem of unemployment is a colossal one caused by various related problems. There are many individual factors like age, vocational unfitness and physical disabilities which restrict the people from joining offered employment. External factors include technological and economic factors that cause increase in unemployment. Every year, India adds to her population afresh.  More than this every year about 5 million people become eligible for securing jobs. Business field is subject to ups and downs of trade cycle and globalization. Economic depression or sick industries often compel employees to become unemployed. Technological advancement contributes to economic development. But, unplanned and uncontrolled growth of technology is causing havoc on job opportunities. The computerization and automation has led to technological unemployment. Strikes and lockouts have become inseparable aspects of the industrial world today. Due to these, industries often face economic losses and production comes down. Since workers do not get any salary or wages during the strike period they suffer from economic hardships. They become permanently or temporarily unemployed. Today, young people are not ready to take jobs which are considered to be socially degrading or lowly. Our educational system has its own irreparable defects and its contribution to the unemployment is an open truth. Our education does not prepare the minds of young generation to become self-employed. On the contrary it makes them dependent on government vacancies which are hard to come.

Broadly unemployment in India can be classified in two categories

This type of situation covers those persons who are unemployed and they have no job for themselves. They have no say in the matter. It means they are devoid of wages although they are capable of earning their wages and also anxious to earn. Such types of unemployment can be classified further as follows

This is the result of the trade cycle which is a part of the    capitalist system. In such a system, there is greater unemployment when there is depression and a large number of people are rendered unemployed.

When at a place where workers have been employed there                  is some change, a large number of persons become unemployed.  It happens in all the industries, trades and businesses where people are employed for a job and suddenly when the job ends they are asked to go.

Unemployment caused by failure of industries

In many cases, a business, a factory or an industry has to close down.

Unemployment caused by deterioration in industry and businesses

In various industries, trades or businesses, sometimes, there is deterioration. This deterioration may be due to various factors. Inefficiency of the employers, keen competition, less profit, etc., is some of the factors responsible for, deterioration in the industry and the business.

Certain industries and traders engage workers for a particular season. When the season has ended the workers are rendered unemployed. Sugar industry is an example of this type of seasonal unemployment.

Disguised unemployment implies that many workers are engaged in productive work, e.g., in Indian villages, where most of unemployment exists in this form, people are found to be apparently engaged in agricultural jobs. But, such employment is mostly a work sharing device i.e., the existing work is shared by a large number of workers. In such a situation, even if many workers are withdrawn, the same a work will continue to be done by the fewer people. It follows that all the workers are not needed to maintain the existing level of production. The contribution of such workers to production is nothing. It has been found that a very large numbers of workers on Indian farms actually hinder agricultural work and thereby reduce production.

This type of unemployment is present in the structure of the economy. It is when there are jobs available but unemployed persons do not possess requisite skills for the jobs i.e., there is a skill-job mismatch. This kind of unemployment has become most prominent in India in recent years.

Unemployment in India is not a straightforward issue that can be estimated directly with a single measuring rod. Even, if a person is not reported to be unemployed at a particular point of time, he/she may be actually unemployed/underemployed. Poor and weaker sections of society, particularly those who are engaged in subsistence agriculture and low income earning self-employment activities frequently face this situation as they do not get employment round the year.

The unemployment problem has become very acute in our country and assumed such a horrifying shape and dimensions that even talented administrators and educationists are finding it hard to find a suitable solution for it. Our development plans have completely failed to provide a reasonable level of employment for our countrymen. With a huge population and slow growth of job opportunities, unemployment has been widespread in India. Large scale unemployment has led to several socio-economic problems like poverty, malnutrition, antisocial and criminal activities, drug and substance abuse, etc. The lack of proper unemployment insurance schemes has further aggravated this problem.

Our unorganized sector consists of agricultural workers in the rural areas and contract and sub-contract labourers in the urban areas. Self-employment accounts for more than 60% of the employed population of India. Casual workers, who get jobs only at times and remain unpaid when they don’t have work, constitute 30% of the workforce, while only 10% are regular employees. Merely two-fifth of this 10% is employed in the government sector. Around 70% of the labourer force in India has education below primary level or is illiterate.

Recent studies have revealed the fact that growth of unemployment in India at current rates can lead to devastating results. At this rate, India is expected to have a 30% unemployment rate by 2020. This would mean that there would be 21 crore jobless people in India. The decline in job creation in agriculture has been identified as one of the important reasons behind the increasing unemployment in India. Various government schemes have been undertaken in India to tackle the problem of unemployment. Swarozgar Yojanas (Self-employment Schemes) have been launched by the government to help young educated Indians earn a living. Specific programmes like MGNREGA/NREGA have been adopted for rural areas. The rationale behind the NREGA scheme is to increase the marginal productivity of the disguisedly unemployed.

The need of the hour is that the task of harnessing the unemployed should be put on a war footing. Massive urban recruitment will be useless, as the cities which have got along well enough without the recruits, can certainly continue to do so. Besides, massive urban recruitment will be inflationary and hence, is impracticable. The unemployed population should be mobilized for rural reconstruction, especially as the villages lacks technical knowhow and also that 70% of India’s population lives there. Stressing on agronomy will augment rural reconstruction, enlighten the farmers, raise agricultural production, conserve foreign exchange and, above all, be a step towards self-sufficiency and employment for all.

The only other country which successfully mobilized vast populations for national development is China. If we are to mobilize our manpower resources we must learn from the mistakes of China during her Great Leap Forward. The Chinese made three basic mistakes. Firstly, the peasants were given inadequate training. Secondly, the tax levied on agriculture communes was exorbitant, often as high as 70% of the total produce. Finally, recruitment was governed not by considerations of merit and ability to do the job, but by loyalty to the Communist Party and on ideological grounds. In India, the counterpart of this last mistake is recruitment of workers on communal, regional and linguistic grounds. This must go. It is the duty of every responsible and patriotic Indian to herald in a new ‘meritocracy’.

Unemployment in our country has become such a complicated, economic, social and political issue, that it requires urgent steps to eliminate its scourge. Half hearted measures or temporary solutions will not yield any fruitful results. The foremost requirement is the overhauling of the existing educational system. We have to change the system from producing white collar job seekers, to practical job oriented technocrats, capable to start their own ventures. There should be perfect co-ordination and integration between our education and the industrial environment. We have to search new avenues in farm sector, herbal and medical fields, to provide job opportunities after completing the education by the students. India should also go for fast development of cottage and small industries. Government should take effective steps so that the globalization does not affect the small and cottage industries. The industrial development can relieve us from this problem to a great extent. We must concentrate on labour intensive units. We have to plan and exploit our industrial potential to the fullest extent, to provide jobs to our fellow youths. In a nutshell, the problem of unemployment has to be dealt with on war footing, lest the youth should he diverted to some wrong path.