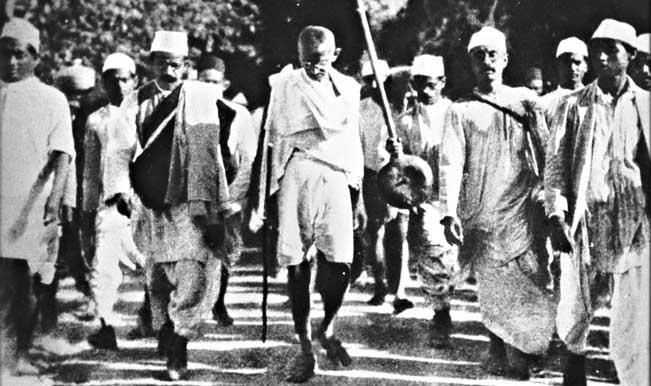 ROLE OF GANDHIJI IN THE NATIONAL MOVEMENT

At one time Jawaharlal Nehru remarked that he doubted the clarity of the Mahatma and also his own association with him. Explaining this paradox Nehru writes thus: “Personality is an undefinable thing, a strange force that has power over the soul of man and he possesses this in a remarkable measure ….. He attracted people……        They did not agree with his philosophy of life or even with many of his ideals….and we went with him although we did not accept his philosophy.”

What gave this enormous spell to the personality of Gandhiji? He alone epitomized the traditions of India. His emphasis was always on action, an emphasis reminding one of the Karma Yoga in the Gita which has been the most popular scripture of the Hindus since the AD 16th century. Although, he was simple in living and saintly in thinking, he permitted himself to be involved neck-deep in the freedom struggle of the country. And all his actions were translated in the Hindu idiom: “Defiance of law and order was non-cooperation with evil; hartal was a moral protest; Satyagraha was the technique for the realization of truth that is God.”

Secondly, he openly asserted that-the concept of truth (God) is almost unattainable, each one is endowed with a fraction of truth, has almost the same meaning as the cardinal principle of the Upanishads that salvation lies in the merging of the individual’s soul with the universal soul.

Thirdly, his stress on simple living and abstemious habits of diet cast a spell on the masses of India. Indeed, he did skip over two stages of the four traditional ashrams known for two millennia in India. He became the apple of the eye of the common man because sainthood has always had a profound appeal to the Indian masses reminding them of the various acharyas like Sankara and Madhava and the saint-singers of the Bhakti Movement. Although, the middle class did not like his hob-nobbing with the Harijans, they could not but admire him, for deep down in their hearts they knew that they were in the wrong, not the Mahatma. Besides, there was always a surreptitious veneration for meditation and fast, for they constitute a part of Hindu traditions. And with regard to the rich class, he adopted a shrewd policy of admonition and expediency: he talked of the moral and material upliftment of all but wanted the rich to hold all the property as the trustees of the community. Thus, all classes of people were taken in by the Mahatma. In the words of Parcival Spear: “He translated his moral into popular terms and go made the whole political movement seem more of a pilgrimage than a war.”

While carrying the traditions of India in his wake, Mahatma also succeeded in incorporating some of the dynamic values of modern times. Time and again he stated that he was a great devotee of non-violence and Satyagraha as the only true means for achieving truth, he included a great number of riders to his fundamental beliefs which bring out the stamp of his legal and political knowledge of the modern times. His remark that if a cow comes to kill an individual, he should kill the cow goes to confirm his belief in the right to live. His contention that if monkeys destroy the crops and thereby endanger the very survival of man, he would himself organize a party to kill the monkeys is his acceptance of the modern truth that only through existence, man can realize what he is and also what should be his equation with the ultimate.

Apart from his modernity, his personality and programme incorporated in a subtle manner the work of the previous makers of modern India. The very expression ‘non-violence of the strong’ reminds us of Swami Vivekananda emphasis on power and strength. His intensive sympathy for the alleviation of the masses reminds us- of both Ramkrishna Parmahansa and Swami Vivekananda. His own confession that the use of non-violence, partly worked out as violence, achieved what all he aimed at and his approval of the use of Satyagraha as a policy of the Congress. Without the Congress satyagrahis conforming to the presumptions of Satyagraha, further prove that he carried the legacy of extremism and terrorism in his wake. To be more explicit, Gandhiji talked of three levels of non-violence: without an inner conviction one can take to non-violence as it gives practical results; without conviction it can be used as a better method than force to achieve good; and to those for whom non-violence is an inner impulse, it serves as a means to convert the opponent by the power of love and suffering. Moreover, he always acted as a restraining influence on the youthful revolutionaries without losing his strategy of keeping the British guessing. In the phraseology of Percival Spear: “The Mahatma contrived a method to be constitutionally unconstitutional.”

The Mahatma’s contribution begins from the year Tilak passed away. It was after his death that the Congress adopted the policy of non-violence, non-cooperation under the guidance of the Mahatma. In general, Gandhiji applied his techniques three times within a span of little more than 20 years: the first was in 1921, the second in 1931, and the last, the Quit India Movement in 1942. The first two movements were withdrawn because they tended to grow violent. And the last movement was put down heavily by the British Raj in the very beginning; and the quick decision of the Government of England to grant independence, destroyed its rational. Apart from these chief movements, Gandhiji was also responsible for the Congress rescinding its earlier decision to contest the elections held under the Montague Chelmsford reforms and also resignation of the Congress ministries in 1939, along with the policy pursued by the ministries during the two years of their stay.

The Civil Disobedience campaign of Chauri-Chaura in 1921 was abandoned because a few policemen were burnt alive. The campaign of the thirties was abandoned because of no definite reason, although his Dandi March created a sensation. “It. is hard to defend his pact with Irwin on any rational ground, unless it was a tacit admission of failure and inability to continue the Civil Disobedience movement any further. It is harder still to understand why the great movement which was declared by Gandhiji himself to be a fight to finish was suddenly abandoned for the sake of the comparatively minor issues of separate electorate to the depressed classes.” The third and the last movement was almost nipped in the bud because the British Raj carried out preventive arrests and declared the Congress an illegal organization. And far more significant was the repercussion of the other two acts. When the Congress refused to cooperate with the elections held under Montague-Chelmsford reforms, they sabotaged forever the famous announcement of Montague; the Government of England aimed to introduce self-government by gradual stages while the Congress Party, as guided by the Mahatma, hustled the British Government to abandon gradualness as evidenced by the Government of India Act of 1935. Commenting on this, Coupland writes: “Thus, there was no long period of transition during which the natural umpire was still there to watch it.” Again the non-cooperation of the Congress, after the Second World War broke out, destroyed the chances of making the federation a success. In the language of Sir Percival Griffiths, “It is no exaggeration to say that by its unhappy timing of these campaigns the Congress helped to kill the federal scheme and perhaps destroyed the last chance of pre serving a united India.” Besides the stand taken by the Congress ministries accentuated the cleavage between the Muslims and the Hindus. The Muslim League was told point-blank that it could obtain a share in the offices only if it became a part of the Congress Party, while at the same time the Congress started a mass contact movement to shepherd the Muslim masses into the Congress fold. This put off the Muslim League and in 1940, they resolved for the attainment of Pakistan. Apart from resigning the ministries, the Congress policy in the thirties as guided by the Mahatma is a matter of controversy.

Leaving aside the subsidiary steps taken by the Mahatma to achieve independence, we have to discuss the following controversial issues in evaluating his role in the emancipation of the country. The Mahatma denounced violence and those who stood for extremism, but violence probably did influence the decision of the British Government to leave the country. According to Dr RC Majumdar, “Political leaders of both England and India agreed with the value of terrorism as a means for freedom.” e.g., Sir Curzon Wyllie was shot dead in 1909. At this time Lloyd George expressed admiration for the patriotism of Madan Lai Dhingra, and Churchill, too, shared the same view. A terrorist leader justified his programme thus: “We did not mean or expect to liberate our country by killing a few Englishmen. We wanted to show people how to dare and die.” The confidential reports of Lord Minto showed that the government was very much worried over the revolutionary activities. Contending that the Revolutionist Movement should be given its due place in the liberation of the country, Dr RC Majumdar writes: “Popular approval of these acts is still to be found in the folk songs about the martyrs in Bengal and other parts of India.” Secondly, Dr RC Majumdar also contends”… Gandhi himself put a seal of approval to the often-repeated claim of Indian Muslims that they formed a separate nation that they were in India but not of India.” Added to this, according to this writer, it was Gandhiji and his followers who refused to co-operate with the Muslim League in 1937 and thereby forced them out. “The Congress virtually refused to form coalition ministry with the Muslims unless they liquidated the Muslim League and repudiated all vestiges of their claim to form a separate political entity. Nobody who had any knowledge of the background of Muslim politics could imagine for a moment that the Muslim League would commit political Hari-kiri at the bidding of the Congress.” Thirdly, the role played by the Indian National Army of Subhash Chandra Bose. He contends that the granting of freedom was because of various factors. “Their (the British) physical strength, no doubt, deteriorated, but that was due to the hammering blows of Hitler, the victories of Japan and the impossibility of placing reliance on the Indian sepoys after the formation of the Indian National Army.”

Before concluding this topic, we have also to mention the other forces which facilitated the declaration of independence in 1947—the rise of nationalism and democracy all over the world, the rise of the communist movements all over the world and as supported by communist Russia, the basic humanitarianism and liberalism of Great Britain, etc.

In this manner, the contribution of Mahatma Gandhi was indeed immense, provided we keep in view that he was the perfect embodiment of the traditions of India and also the heritage of all who walked before him in the freedom struggle of our country. It is not disputable that it was under the guidance of the Mahatma that the Congress became a mass movement-picking up the tradition from Tilak and also a revolutionary movement-picking up the traditions from the extremists and the terrorists. That is why the conclude sentence of Dr RC Majumdar is the following “…while Gandhi will live” in history as one of the greatest apostles of peace and non-violence in a war-stricken world, the credit now given to him for his political acumen which led the Indians to the final victory, cannot command immediate assent an needs a great deal of objective thinking”.