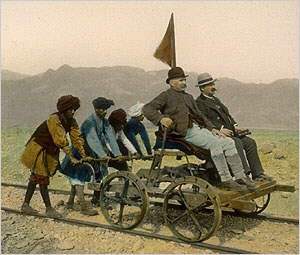 THE LEGACY OF THE BRITISH RAJ

“More than two centuries dominion over a country, by any alien power, but natural, results in a large impact on its social, economical, cultural, legal and political system of the civilization.”

India too inherited so many legacies from the British Raj, that had far reaching effects on her art and culture, education, language, legal, political system and economic parameters and so on.

The question of legacy as such has arisen because of the arrested nature of Indian civilization.  From time immemorial, our civilization showed a marvelous sense of adaptability. The Persians gave us their imperial ideas and the duality of good and evil. Soon followed the Greek ideas in trade, literature and philosophy. Whatever rudimentary ideas the Kushans, the Sakas and the Pallavas had, they too were absorbed. It was this quality of assimilation that had gone away from India by the time the Muslims came. From then onwards Indian civilization developed its own immunity or defence mechanism like the tightening of caste rules and increased social segregation. India also witnessed the Bhakti Movement which provided a drawbridge between Islam and Hinduism. All the same the spring had gone away from Indian civilization and it presented a pathetic spectacle by the time the British Raj was established. For reasons not known to history, the Indian civilization once again showed its old quality of assimilation without losing its own identity, all under the impact of the British Raj. This is the raison d’etre for the British legacy.

The one legacy that was consciously handed down to us was the introduction of English language in 1835. Lord Macaulay was able to carry the day because he contended that a single shelf of Western knowledge was more precious than the whole range of the oriental knowledge. Although he spoke disparagingly of oriental knowledge and wisdom, the chief motive that prompted the introduction of English was the salutary effect that the spread of Western knowledge and wisdom would have to a great extent these expectations are being fulfilled. And ever since the nineteenth century we are being irradiated by the Western thought enriching our intellectual life.
“Western influence in North Africa, e.g., has taken a French form, while in Japan in the Meiji era it often had a German one. Shakespeare would not have been as popular as he is in India today if French had been the language medium for communication with the West. Cycling, instead of cricket, might have been a modern Indian national sport. But in general, with due allowance for national idiosyncrasies, what Britain did was to import ideas, values and inventions from the West and add them to the rich mixture of
Indian life.”

One of the important mental perspectives that we are gaining is in relation to time. All through the progress of Indian civilization the linear perspective of time was not known. The Western civilization lays great stress on this perspective because they look back to a finite point of time when the Original Sin was committed and look forward to the Day of Judgment when man would be redeemed of his sin. This way of looking at time makes the Western civilization think of Utopias and futuristic societies. This is borne out by such writings as Bacon’s New Atlantis, Sir Thomas Mores’ Utopia, and Samuel Butler’s Erehwon and in modern time Nineteen Eighty-four of George Orwell and the Brave New World of Aldous Huxley. Thus, as we are being influenced by this linear perspective of time, we are adding a new facet to our mental outlook, although we have not heard about futuristic writings, we have been thinking in terms of doubling the national income quite soon and we have been also very actively concerned with what India was in the past.

The second perspective that has partly come to us through the English language is scientific rationality and its truth. There are three kinds of rationalities first is deductive reasoning the second is inductive reasoning and the third is scientific reasoning. The last one is based on facts and experiments. What is proved by an experiment we accept as factual truth? We did possess the other kinds of reasoning in the past but not the scientific reasoning and so our mental outlook has been enriched by contact with the West through the media of English language.

The introduction of English language in India was also the beginning of the end of the British Raj. The moment we learnt the English language we were influenced by the liberal and progressive ideas of the English thinkers. And we applied their arguments against the British Raj—one of the determining factors in the emancipation of India. The English language served as a window on the Western culture and civilization.  However, it has made our understanding of the West incomplete. There are quite a number of blind-spots in our appreciation and awareness of the Western culture and civilization. We are prone to equate Western culture to English culture. In novel-writing, Balzac of France, Dostoviesky and Tolstoy of Russia are perhaps more than equal to the great novelists of England. We have known much about the theatre and too little about the ballet.  For that matter even our appreciation of Western cuisine is limited to the English food habits. When we think of fish we only know of fish and chips and not the least about caviar and the vodka of Russians. We have developed a taste for bread but not for spaghetti and macaroni. In brief, the role of the middle-man played by English language in transmitting the Western culture and civilization is not complete. In the language of Percival Spear, “The goods came from the West but sometimes they were wrapped in the Union Jack.”

One more legacy of the British Raj is constitutionalism. It was announced in 1917 by Lord Montague in the House of Lords that it was the objective of the Government of England to introduce self-government in gradual stages in India. Indeed, we had the democratic tradition but not the democratic form which we possess today. Along with this gift came the Parliamentary system of government, the organization of government, well trained bureaucracy and also a well trained and disciplined army owing loyalty to the nation.

In the political field too, there is the other side of the coin. The parting gift of the English was the Indian Independence Act of 1947. We base our arguments on the provisions of this Act, in defending our stand on the Kashmir problem before the Security Council. In this Act the princes of the princely states were given the right to join either of the dominions or combine themselves into unions. We all know the mischief that came out of this, after the British left India. Many more are the thorny legacies of the British Raj the MacMohan Line as agreed to at the Simla Conference held in 1914; a truncated India, a biased attitude towards the higher echelons and the enclaves on the eastern frontiers of India as left by the Radcliffe Award.

In the social field too, bequest of the British Raj is considerable. The legislation that was passed by the British Raj, either to reform or end some of the social practices and customs was a great legacy of the English. With the abolition of Sati in 1829 and the Widow Re-marriage Act of 1856, the first shots were fired at the citadel of stagnant Hindu society. Although the British did not interfere with the social life of the people after 1857, the initiative taken by the British Raj acted as a leaven in the social ferment of the second half of the 19th century which culminated in many social movements. In the end individualism has come to mean that each one of us is not our brother’s keeper and yet we cannot get away from the responsibility of the other’s misery. This concept which the British Raj handed down to us is contrary to the concept of status of the feudal ages and the metaphysical bonds of karma.

And the social side has its own lighter side too. The standards set up by the British Raj in etiquette and manners are still being eagerly accepted by the educated Indians. The collar and tie, the dinner jacket, tea drinking; are a few out of a host of practices that have come down to us. In a way we are still unable to get over some of the social habits that we acquired during the British Raj. We do not mind if someone wears the sola topee during the hot summer but if anyone ventured to wear a Panama hat he would become the butt of all jokes. That is why Malcolm Muggeridge said that almost the last Englishmen are the Indians.

One more deliberate introduction during the British Raj was the legal system as we know today. The introduction of the legal system is proving to be a great solvent of the age-old social customs of India. In a court of law, both the Harijan and the high-caste Hindu are treated on the plane of equality. The system itself is promoting an orderly justice unswayed by the personality of the rulers as in the past. Further with the introduction of the legal system, the local bar council came into existence. What a catalytic agent the bar council was prior to independence is a matter worth investigation. In all towns and to some extent even in cities the bar council was the centre of intellectualism just like the coffee-house in 18th century England and the salon in 19th century France.

And in the field of Economics some conscious steps were taken by the British Raj which have come down to us as legacy, the moment we attained independence, because the Government of India is the inheritor of the British Raj. After the mutiny in 1857 the British Raj was scared of going near social reforms and concentrated its attention on welfare activities like construction of roads and irrigation canals. Even before the mutiny the British Raj introduced railways and the posts and telegraphs. Though, the latter were intended to provide security to the British Raj in India, they had come to play a new role in independent India. The means of communication are the arteries in any developing economy and the very fact that transport and communications get a considerable share in the total outlay of expenditure in our plans is proof of the importance of this legacy. But the legacy in the economic field has its own bleak side too. The Zamindari system and the Jagir system proved quite a headache in the early years of independence. Even the intricate tenancy system and the enormous rural indebtedness which we are still unable to resolve is a legacy of the British Raj.

In this manner, the legacy of the British Raj is far too vast and in modern times we are all living through it. That part of the legacy which is beneficial we are nurturing more and more while slowly discarding the unwanted. In brief, the legacy of the British Raj is a vast spectrum ranging from the infra-red region of the balkanized continent and the ultraviolet region of the new perspectives learnt through the impact of the western culture through the English language.