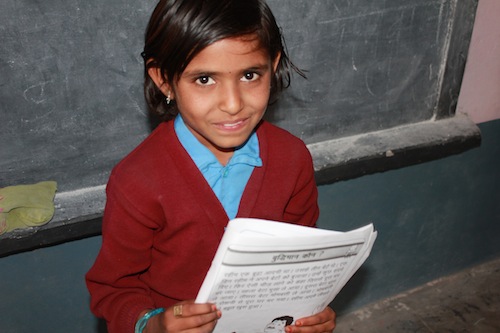 “I ask you all so earnestly to open girls” schools in every village and try to uplift them. If the conditions of women are raised, then their children will, by their noble actions, glorify the name of the country.”—Swami Vivekanand

Today’s girl child is a mother of tomorrow. As a mother, she can give her child a sound nursing and making upbringing. A woman has the maximum impact on healthy the social, and economical decisions in the family. At micro level, an educated woman helps in making the whole family, including the older family members, understand the values and importance of education, and at macro level, an educated women adds to the social and economical development of the nation.

Girl’s education is like sowing the seed which gives rise to green, cheerful and full grown family plant. In ancient times girls’ education had a significant place in the society. Gargi and Maitreyi played very encouraging roles in spreading the education to a great extent.

Women’s social condition started deteriorating with the passage of time. Instead of giving them education, they were being subjected to sufferings under Purdah System, Child Marriage, etc. In some states female infanticide is prevalent even today. A new culture of elimination of female foetus has gradually become rampant. Discrimination between the education of girls and boys is common in rural areas. Many parents feel that the education of girls is wastage as they will go to their husbands place after marriage and more dowries would have to be paid for a more educated girl. The poverty and illiteracy among the people is also a big reason for not sending the girls to schools and colleges. But, things are being changed, though slowly, but steadily. The various awakening programmes launched by the government for encouraging the girls education, the introduction of TV’s in rural areas, the 33% reservation given to females in Panchayats, have played positive role in this direction. Now, the importance of educating the girls is being felt. Several other policies, like 30% reservation to female candidates in services, enhanced subsidy to girls entrepreneurs various self employment schemes launched for the benefits of women like Women Entrepreneurs Development Programme, Self Help Groups of women have resulted in mobilizing and directing the parents to get their daughters educated. The educated women can help in eradicating many social evils prevalent in the society , like dowry, killing the female foetus, discrimination in the matter of education of the girls , illiteracy and so on. Many programmes of the government like population control, polio eradication, programmes relating to the development of the rural area in which the co-operation and co-ordination of the rural masses are necessary, can well be taken care by the women representatives of the Panchayats. If these representatives are educated the implementation of the programmes will be a grand success. Education gives effectiveness and confidence to women.

It is undoubtedly true that girl’s education stimulates educational consciousness and civic sense among the family members. She can teach the family members more comfortably than anyone else. Illiteracy is the cause of many ills. The present day corruption in bureaucracy, particularly in the implementation of the schemes for the development of the rural segment, to a large extent, is because of the ignorance and illiteracy among the rural representatives. A woman influences the activities and decisions of her family more than anyone else. The educated girl can shoulder any kind of responsibility. See the example of Kalpana Chawla, Kiran Bedi, Soma Gandhi, Mamta Bannerjee, Mayawati, Jailalitha, Sushma Swaraj, Uma Bharati, and so on. All of them have earned a name in the society in our country. ‘For the success of a person whether man or woman, education plays an important role. Education for the girls is more important as she not only builds home but all routine responsibilities are taken care of by her. An educated woman not only helps in nourishing the family in a better way but can also help in earning. It is rightly said that God made the mother because he could not be present everywhere. A woman cares the family like a God. “One could judge the degree of civilization of a country by the social and political position of its women”. -Charles Fourier

Education for a girl child means making the next generation well educated, full of virtues, free from the useless superstitions, confident and capable to do something good for the family, for the society and for the country as a whole.
The present day girl is the mother of tomorrow. ‘Give me good mothers and I will give you a great nation”.      -Napoleon

A woman is the most crucial and reverend entity. She must be given all the necessary education. Ignoring her, keeping her Illiterate means we are creating an illiterate and ignorant generation. So it is perfectly true that educating a girl child means educating a family. Development cannot be accelerated unless girls are given right education in right direction. Swami Vivekanand has rightly said, “Educate your women first and leave them to themselves, then they will tell you what reforms are needed.”