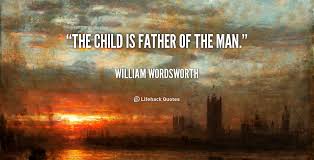 THE CHILD IS FATHER OF THE MAN

“The childhood shows the man,

As morning shows the day.”

This line which has since taken the shape of a proverb really occurs in the famous poem ‘My Heart Leaps When I Behold’ of Wordsworth, the great poet. It implies that the qualities and characteristics shown by a child often indicate what the child is going to be as a grown up man. The childhood is the reflection of future personality. The habits, traits, qualities of a man are usually the development of the habits, traits, qualities he had as a child. A careful study of the characteristic and qualities in a child can help us to foretell his future prospects.

The child is father of the man is proved true in many cases. See the example of Shivaji who, during his childhood, loved so much to hear the stories of famous heroes of the Ramayana and the Mahabharata, became later a great warrior himself. Michael, the famous sculptor and painter, during his childhood used to make drawings on the pots, easels, stools and other things belonging to an old painter. The old painter said, “One day this boy will beat me.” A Young Italian lad, Titian, was very fond of painting pictures, but had no paints to colour with. He was such a genius that he made his own paints. Nelson, the daring Naval Commander of British Navy, showed his traits of courage and fearlessness during his childhood.

Dr CV Raman the first Asian to win the Noble Prize was one of the most brilliant students in his childhood. He turned out to be the great scientist, evolved many theories—the theory of radiation, the theory of molecular diffraction of light etc. Ram Prasad Bismil, Chandra Shekhar Azad, and Bhagat Singh showed their zeal to fight against any injustice in their childhood. They had revolutionary ideals and when grown up they sacrificed their lives fighting the British despots.

Many more examples like that of Florence Nightingale, Macaulay and others can be quoted to prove the veracity of the proverb that ‘the child is father of the man’. But, we can find hundreds and thousands other examples, where childhood of a man did not reflect anything about the grown up personality of a man. Sonia Gandhi never thought of entangling in the political arena. In her childhood, none could imagine that one day she would be in a position to become the Prime Minister of India, the world’s largest democracy. Though, she did not accept the position of Prime Minister. Lai Bahadur Shashtri never showed any such trait in his childhood. He was an average student from a poor and simple family. George Bernard Shaw was known as a hopeless dullard. Mahatma Gandhi was not inclined to become a rich Barrister or such a great freedom fighter. Shelley, the great poet and writer never showed such traits during his childhood. Amitabh Bachchan, the great mega star of today, didn’t show such traits and qualities in his childhood.

Inspite of apparent exceptions, it is generally observed that the characteristics and qualities during childhood are developed in the grown up personality of a man. Circumstances can change the life of a person. Fate and coincidence play a great role in developing qualities of a person. The childhood ordinarily reflects the caliber of a person, but in changed circumstances, with several coincidences and the destiny, can change many things. An average child can reach the highest position and a brilliant one may have to rarely survive.

An old proverb, “As the twig is bent, so the tree will grow.” Endorses the saying “The child is father of the man.”