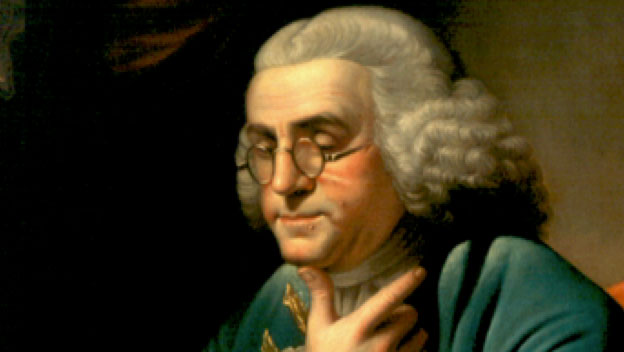 Benjamin Franklin has influenced American technology, and indirectly, lifestyles by using his proficiencies and intel­ligence to conduct numerous experiments, arrive at theories, and produce several inventions. Franklin’s scientific and ana­lytical mind enabled him to generate many long lasting achievements, which contributed to the development and re­finement of modern technology.

Few national heroes, including George Washington and Thomas Jefferson, played a more significant role in shaping the American way of life than Franklin. According to Fowler, “He personified the ideal of the self-made man, and his rise from obscurity to eminence exemplified the American dream”. Looby adds, “The study of Franklin’s image for the past two centuries shows that his legacy had a distinctive place in American culture”. It has been felt by many people over the years that there was no United States inventor as great as Franklin was until the time of Thomas A. Edison.

Franklin’s words to a friend in Pennsylvania, Joseph Huey, best explain his attitude not only toward what he con­sidered his civic duties, but also his investigations as a scien­tist or philosopher. He made some of the most famous and certainly the most practical discoveries of his time. “For my own part, when I am employed in serving others, I do not look upon myself as conferring favours, but as paying debts. In my travels, and since my settlement, I have received much kindness from men, to whom I shall never have any opportu­nity of making the least direct return.., I can therefore only return on their fellow men; and I can only show my gratitude for these mercies from God, by a readiness to help his other children and my Brethren”. Wright quotes Franklin as say­ing, “As we enjoy great advantages from the inventions of others,” and, “we should be glad of an opportunity to serve others by any invention of ours”.

Franklin summarizes his attitude toward his inventions by asking the question, “What signifies Philosophy that does not apply to some use?” Another time Franklin is quoted as saying, “Utility is in my opinion the test of value in matters of invention, and that a discovery which can be applied to no use, or is not good for something is good for nothing”. Franklin never claimed a penny for any of his inventions, devices or experiments. He even distributed detailed plans of some of his inventions so that anyone could own them.

The Pennsylvania fireplace, sometimes called the Franklin stove, acquired its name from Franklin, its inventor. This device, he said, “made my living room twice as warm as it used to be with a quarter of the wood I formerly con­sumed…” The heating of houses was growing more expen­sive, the wood was being used extremely inefficiently, and much of the heat was lost up the chimney. Franklin’s fire­place solved these problems by using a number of passages and vents so that the cold air was drawn in from outside the building, warmed in the air passages, and then blown into the room. He said “your whole room is equally warmed, so that the people need not crowd so close round the fire, but may sit near the window, and have the benefit of the light for reading, writing, and needlework. They may sit with comfort in any part of the room, which is a very considerable advantage in a large family, where there must often be two fires kept, be­cause all cannot conveniently come at one”. Several people considered the fireplace a luxury for the wealthy.

One of the most important features of Franklin’s fire­place was the flue. Meltzer points out that the flue spread heat by circulating it into the room rather than simply send­ing it up the chimney and out. The fireplace also featured a damper that can close the chimney off and keep out the cold. The fireplace soon became widely used, as it was efficient and available to anyone who could build one.

One of Franklin’s most famous and notable experiments was his kite experiment. He first set out to establish if light­ning was a form of electricity. With his kite, Franklin drew lightning down to the ground, thus determining that it was a form of electricity. The most important concepts of his ex­periments were the existence of positive and negative elec­tricity, the fluidity of electrified particles, and the identity of lightning and electricity. The experiment with the kite is taught in school to nearly every American child. It sparked the birth of lightning rods. The rods kept people’s homes from getting hit by lightning and catching fire. House fires caused by light­ning were one of the most dangerous problems colonists had to face. “Soon after the rods were invented, all of Philadel­phia, Boston, London, and Paris began using them”.

Some of the new electricity related words conceived by Franklin included the condenser, conductor, electric shock, positive and negative electricity, and plus and minus charges. He wrote Poor Richard’s Almanac in 1732 to explain the prac­tical application of electricity. Both Harvard and Yale gave Franklin honorary degrees of Master of Arts even though his formal education ended in the second grade. After Franklin’s experiments were successfully performed by French and Eng­lish scientists, the King of France sent Franklin his personal congratulations. The Royal Society elected Franklin as a mem­ber by unanimous vote. They later awarded him the Society’s highest honor, the Copley Medal, after learning of some of his other talents and distinguished accomplishments.

Some of Franklin’s other inventions were the copying press, a musical instrument called the armonica, a rocking chair that fanned itself as it rocked, a long arm device for moving books on high library shelves, a combination foot­stool-ladder, a clock with internal workings, the odometer to calculate mileage, a combination chair-table which is now used as a school chair, bifocals, a rubber catheter, and a can­dle made of whale oil that gave a clean white light. All of these inventions became solutions to ordinary, everyday prob­lems and needs.

Franklin was not only an inventor, he was a great improver. He analyzed the spoken part of the English lan­guage and produced a phonetic alphabet based on the differ­ent sounds in the language.

In letters to other scientists, Franklin wrote about his observations of everyday phenomena. Clark states about Franklin, “One sign of the scientific mind was Franklin’s de termination to question, to seek explanations of natural phe- nomena that could be checked by experiment of documenta­tion”. Clark also believes that Franklin was intrigued by the processes of the natural world and he tried to interpret them. Franklin used his vast knowledge of geology, meteorology, physics, chemistry, astronomy, mathematics, aeronautics, navigation, agriculture, medicine, hygiene, seismology, hydrography, ethnology, oceanography, and paleontology to come up with the theories about phenomena in these fields.

One of Franklin’s theories in the field of meteorology was based on his observation of weather patterns. He con­cluded that northeast storms that move across the Eastern Seaboard in the summer begin first in the southwest. He pro­posed daylight-saving time, noted lunar rainbows and lunar and solar eclipses. Franklin also observed animals such as dolphins, sharks, shell fish, pilot fish, tropical birds and her­ons. He even examined fog and conceived several theories about it.

In addition to his research, Franklin was a prolific writer of scientific observations. He wrote about his observations on the effect of oil on water, the cause of the Aurora Borealis, water spouts, whirlwinds and thunderstorms, the direction of rivers and tides, salt and seawater, sunspots, heat absorption by the color of an object, magnetism and the theory of the earth, earthquakes, sound traveling in fluid like waves, pre­historic fossils, causes of colds, the tonic effects of cold air and ventilation, cooling by evaporation, and the course of the Gulf Stream and its effects on shipping.

As a complement to his work, Franklin studied the sources of lead poisoning, causes and cures of smoky chim­neys, relationship of tobacco to hand tremors, effects of diet and activity on general health, and the depth of water and speed of boats. He wrote copiously on gout, temperature of the blood, physiology of sleep, deafness, and nyctalopia, infec­tion from dead bodies, infant mortality, and medical educa­tion.

Franklin bought a farm and experimented with grass culture. He advised the cultivation of native Indian Corn and silkworms and introduced rhubarb to the colonies. His curi­osity touched on nearly every part of eighteenth century in­tellectual pursuit. The University of St. Andrews awarded Franklin an honorary doctor’s degree in 1759 and Oxford University matched it in 1762.

According to Clark, Franklin did much work to improve cities. He focused his improvements mainly on Philadelphia. In Clark’s words, “Franklin was public spirited and worked constantly to make Philadelphia a better city”. Scholars in the colonies had no organization, so Franklin helped to es­tablish the American Philosophical Society with headquar­ters in Philadelphia, making it the most advanced city in the colonies. The streets needed to be paved, cleaned, and lighted. Franklin started a program to improve and take care of them. Franklin redesigned the streetlights to, as he said, have “four flat panels and a funnel on top to draw up the smoke”. The globe-shaped lamps were replaced with Franklin’s new ones so they stayed bright until morning.

When Franklin noticed that criminals were getting away without punishment, he sought to reform the city police. He then formed the Union Fire Company in 1736. He helped to organize fire companies into the “Philadelphia Contibutionship”, which is deemed the first insurance com­pany in America. He set up premiums and payments as presi­dent of the company.

Shortly after Franklin became clerk of the Pennsylvania Assembly, he persuaded it to pass the first militia law in Penn­sylvania’s history, allocate money for defense, and appoint officers to conduct full-scale war. Franklin founded the Acad­emy for the Education of Youth, which later became the Uni­versity of Pennsylvania. The university’s athletic field is named in Franklin’s honor. He also founded a city hospital, the Pennsylvania Hospital, in 1751.

Therefore, Benjamin Franklin’s influence on the Ameri­can way of life is still felt today. His great mind enabled him to produce many long lasting achievements, which contrib­uted to the development and refinement of modem technol­ogy.