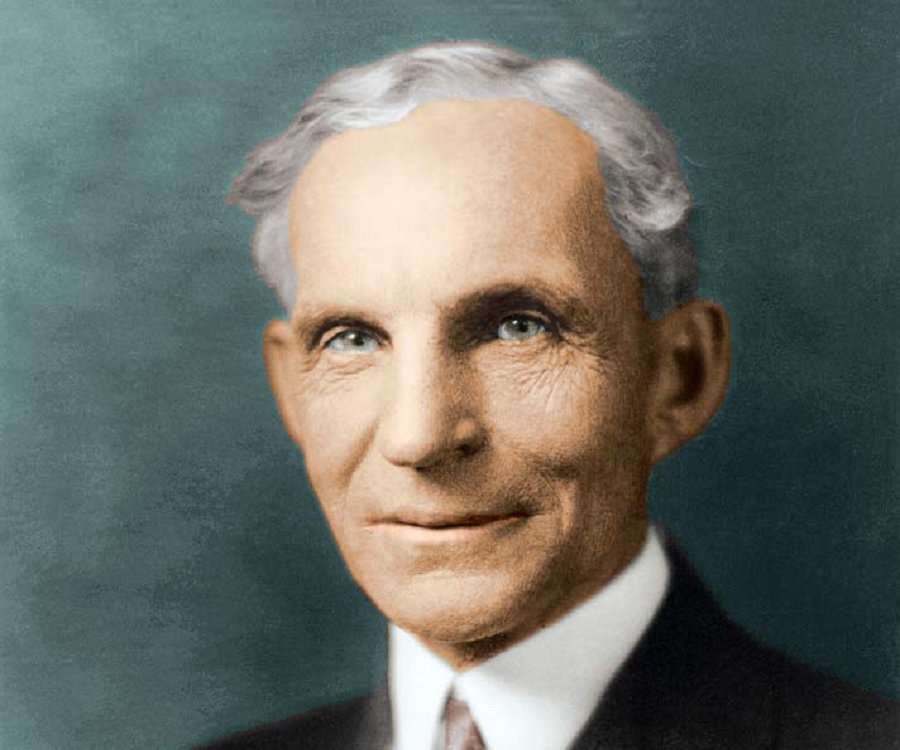 Henry Ford was one of the most brilliant entrepreneurs in creating the automobile assembly line; it was his controversial characteristics and unorthodox approach towards ad­ministrating the Ford Motor Company, which resulted in the conglomeration of one of the most successful corporations in the world. At the turn of the century, everything was boom­ing! The growth of the economy and stock market increased the job opportunities as well as morals. Because of this in­dustrial revolution, out of the woodwork came a humble yet driven man, Henry Ford. Between the five dollar/day plan, his policies on administrating the company, and his relations with his customers, Ford was often presented as a suspicious character. This controversial behavior epitomized the success of the company, it did not lead to his own downfall as many suspect. The Anti-Semitic accusations, and the belief that Ford was taking advantage of his customers, were by far overshad­owed by his brilliance and strong hand in running his com­pany.

Of course, there were not always supporters of Henry Ford. If fact, there were many critics, critics who believed that Henry Ford was so controversial that it prevented the potential of Fords from becoming greater than it is today. By the mid twenties, the Ford’s was already the world’s most successful automobile company, but their great reputation would soon decline. Fords $5/day plan for all employees sig­nified the overwhelming success of the company. Many be­lieved this success was short-lived with the new policies deal­ing with the workers, which soon followed. With the need to increase production and lower costs, in the mid 30’s Ford cut all Ford worker’s wages in half. Workers were expected to work faster, and harder. Department heads were ordered to ban all talking and whistling while work was in progress. All of this was a ploy by Ford to make sure he knew every move of his workers. He was very possessive. Secondly, Ford be­gan to fire older workers and hire younger workers. His ide­ology was that the younger workers could work more pro­ductively and more efficiently, which in turn would send more money flowing into his pockets. What resulted was quite hu­morous in fact. Black hair dye became a hot seller in the De­troit area. Older workers tried to disguise their age by dying their hair black. Ford’s manipulation of his workers was im­moral and unjust. There was no industrial democracy, work­ers were forced to do what they were told or would be out of a job.

Henry Ford’s controversial behavior reflected badly on himself and on the Ford Motor Company. The Anti-Semitic
views expressed by Henry Ford could never be denied. It was common knowledge in fact that Henry Ford was prejudice. He wrote an article in the Dearborn Independent expressing his ideas that Jews were the cause of many people’s problems. Henry Ford was sued by a man by the name Aaron Sapiro in the early 1930’s. Sapiro had evidence that Ford threatened himself with Anti-Semitic sentiments. Ford was recorded as saying, “Sapiro is a shrewd little Jew. The bible says Jews
will return to Palestine, but they want to get all the money out of America first. Sapiro should be kicked out because he is trash..” The result of the trial was humiliation for the Ford Company and Henry Ford himself. After a hung jury in the first trial, the case was dropped when Ford wrote a lengthy retraction and apologized for his statements. Ford’s was declining in profits and production among the world’s best —all because of Henry Ford’s ego. Thus, by 1931 Ford lowered in the ranks, controlling only 28% of the market 2nd to GM
with 31%.

Henry Ford was the godfather of the automobile indus­try in the early 1900’s. The development of his River Rouge

Plant was considered an “industrial Cathedral.” Hundreds waited month after month in front of the employment build­ing hoping to be hired. To foreign immigrants it meant hope and a successful future. The River Rouge plant employed over 50,000 employees. Pols, Lithuanians, Germans, almost every Western Europe country could be represented at the Ford Plant. Like a father, Henry Ford began educational programs, teach­ing his illiterate employees how to read English. Company picnics and dinners were all part of Ford’s policies that were so unusual, yet so brilliant at that time.

Of the most controversial actions of Ford was his hiring of criminals. In fact it was said that, “thousands of former criminals were taken on the Fords payroll over the course of the years, all at Mr. Fords Requests.” Not only was this a highly questionable decision, but it startled everyone. It was odd, especially when there was such a demand to work at Fords. Why would Henry Ford want to take the risk of hiring potentially dangerous felons? Nobody would be able to an­swer this question better than Ford’s right hand man Harry Bennett would. Bennett has said that Henry Ford was very sympathetic towards criminals, even that he would try and, in a sense, rehabilitate them. Not only did the new workers please Henry Ford, but they also helped the company itself. Ford’s controversial new policy of hiring criminals not only surprised the River Rouge workers, but it swept across the nation. Many news articles were printed concerning Ford’s policies. In ef­fect, Ford was receiving free advertising. Whether it was his intent or not, Ford’s ideas, sometimes eccentric, helped mar­ket the company for the good.

In 1914, Henry Ford hired John R. Lee to update the company’s labor policies. $5 per day was to be split into half wages and half profits. Ford employees would only receive profits when they met specific standards of efficiency and were cleared by the sociology department.  On January 5, 1914, Henry Ford’s announcement of the incredible $5 dollar/day plan swept the newspapers across the nation. The Detroit Journal announced,

The surprise of the labor leaders and the consternation of manufacturers,, Henry Ford announced on Jan 5, 1914 that a minimum wage of $5 dollars/day would be instituted im­mediately in the Ford plants, along with a profit sharing plan for all male employees.

Not only did Henry Ford’s new deal shock the nation, it sent a tremendous number of workers to Detroit. For the next ten years people would do anything to become a worker of one of Henry Ford’s plants. It was unheard of to be offered $5/day by any automobile company. In fact the average sal­ary for most was a mere $2. 50/day at GM and Chryslers. However, Henry Ford’s $5/day plan was truly an illusion, it allowed for greater control of his workers. It was said, “The 5 dollar/day plan was an important early attempt at implement­ing a corporate welfare program.” Ford wanted to see his com­pany prosper, his employees were a part of this company.

The development of the Sociology department would allow Henry Ford to exploit his employee’s private lives. “Employees were advised by investigators on how to live in order to receive his/hers share of the profits.” The result of this was a tight knit community with no corruption. This de­partment also monitored the daily happenings in the plant. In fact, the department had over 1000 informers who would notify the department if any stealing or illegal plans were tak­ing place. Social workers conducted extensive interviews on subjects ranging from household finances to sexual patterns. It was stated at that time that, the intrusion into workers lives, in the minds of Ford officials, was a small price to pay for increased wages, efficiency, production, and in the end prof­its for the Ford Motor Company.

Many felt that this socialist system was infringing upon the democratic rights of the workers specifically the right to privacy. Observers claimed that workers were forced to act like robots in order to keep their jobs, but this was not the case. Henry Ford created the stability and order that any cor­poration needed to succeed in the early 20th century. Some may say that Ford was a sort of father to the workers he em­ployed. After all, a father is always harshest to the ones he cares for most. Moreover, that was what Henry Ford was.

Henry Ford was not a greedy man, his sometimes-unor­thodox behavior and policies epitomized the success of the company. Throughout the depression, he offered a sense of hope for his employees. By offering jobs to outcasts, he be­came very controversial, but he had reasons. Ford wanted his workers to be moral citizens, people that could offer The Ford Motor Company loyalty, leadership, and trust. A result of this was the financial success of the company. Henry Ford knew what he had to do in order to accomplish his goals. Ford knew he might not always be accepted in the community, he also knew that he had to take the risk. It was all clear when he said, “We’re going to expand this company, and you will see it grow by leaps and bounds.” How amazing that his proph­ecy has came true.