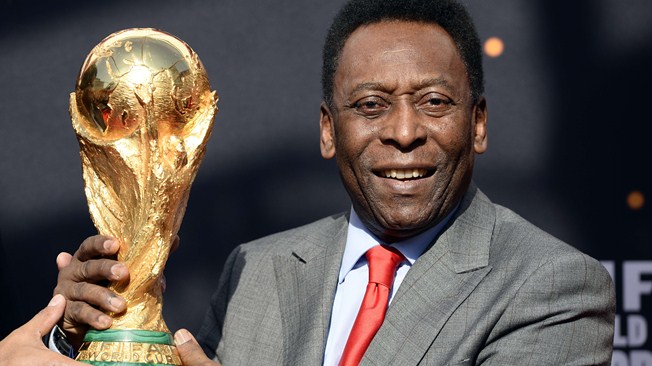 Athletic Genius, Soccer Legend, Master of Offense, Pele. All are names for Edison Arantes do Nascimento, undoubtedly one of the greatest soccer players of all time. This report is to inform you about the things Pele accomplished through­out his life and career, and also about what he did that affected the world so much.

Pele was born on October 23rd, 1940, in the Brazilian town of Tres Coracoes, which means Three Hearts. Pete was the first child to Dondinho and Celeste. Dondinho, his father, was a professional soccer player, and started Pele in the sport.

Pele started playing soccer with his friends in the street, using a sock filled with rags as a soccer bail. They’d use the sidewalks as sidelines, and buckets or barrels as goalposts. “I became pretty good at being able to dribble the sock around and even learned how to hit it with my head,” Pele says. He would sometimes cut school with his friends just to play soc­cer in open fields. In fact, he was discovered by a soccer scout while playing with some fellow workers.

Pele’s first job was a cobbler’s apprentice, which paid just over $2 a month. A cobbler is one who repairs shoes, a skill which Pele continued to use throughout his soccer ca­reer. He would repair his and his teammate’s shoes because very few soccer teams had people to do it for them. About the time he took that job, he was given the nickname of Pele. The word, which has no literal translation in Portuguese, was given to him by the boys he used to play soccer with. Pele didn’t like it at the time, because he thought they were making fun of him. He sometimes got into fights with his friends over it, and asked them to call him Edison, his real name. They con­tinued to call him Pele though. Pele says “Even today, my real friends call me Edison.”

There was a time, earlier in his life, when Pele, smaller than most people he played against, would get into fights of­ten during soccer games. Often times when he’d outclass the older boys he was playing against, they’d become cynical, and start fights with him. “He would come right back and take a swing at the kid who hit him. The games would be cut off when everybody got into a fight,” recalls Pele’s younger brother, Zoca. Pele would often watch older workers play street games, and try to pick up moves from them. He and his friends would share their dreams of playing on a well-known team. Who would’ve thought? “Often when I got home from my job and from the games we played I was very tired and would skip my dinner. But to me playing soccer was even more im­portant than eating,” Pele says, reminiscing of his younger years.

The chance Pele had hoped for most of his life, a spot on a soccer team, came to him when he was 12 years old. A former Brazilian soccer player, Valdemar de Brito, who was also a talent scout, had heard a lot about Pele. As it turned out, Valdemar had been looking to start a junior soccer team, and had already begun to find kids from 12-15. Intelligently enough, he’d been scouting around schoolyards and sandlots to find players. Then one day, he happened upon Pele playing at a construction site, and upon watching him, Valdemar deemed Pele “pure genius.”

“I couldn’t believe that such a young boy was able to perform some of the moves and tricks with the ball that Pele was doing. He was making the older men look silly and in an effort to stop him, they kept fouling him. He would wind up on the ground but be up a second later doing it again,” re­members de Brito. De Brito asked Pele to join the team, and Pele accepted. Valdemar began to train Pele, and even started him on physical conditioning. It wasn’t until then, when Pele was 12 years old that he got the chance to play in a regula­tion game with kids his own age.

Pele was already starting what would later be known as his signature right footed and head goals. After 3 years of junior soccer, he was starting to be watched by many profes­sional clubs. Valdemar de Brito set up a meeting with Pele and his parents to discuss starting Pele in the professional ranks. At first Pele’s mother was reluctant to have him leave home, but eventually both his parents gave the okay. Pele was to try out for the famous Santos team. So it happened in June of 1956, 15 year-old Edison Arantes do Nascimento boarded a train. He recalls it as a humorous experience now, but hated it at the time.

“It was terrible, I got sick almost as soon as the train left, and I felt worse as we went on. I was really scared I wouldn’t be able to take it anymore. But finally the train got to Santos and I felt a little better as we got off,” Pele explains of his journey on the train. On June 8 th he met with the Santos officials, and the Santos team, many of whom were skeptical. Pele was nervous going onto the field, but gained confidence as he played, showing his amazing skills. The officials ex­plained to him that he’d start out on the Santos juvenile team. By September, he was already playing for the regular team. In his first professional game, he started the second half, and scored his first professional goal just a few minutes into the half. This was to be the first of his 1,200 professional goals.

Pele’s next step was to try for the national team. The selection of the national team is very complex process, and involves going through sheets of every professional soccer player. The sheets include not only playing stats, but also have personality reports. Personality is important in the team se­lection, because of the importance of upholding the dignity of the country you’re representing. The committee that was to decide on who made the team had a meeting with Pele in person to help with their decision. Their decision was to al­low 16 year-old Edison to represent Brazil on the national soc­cer team.

“I was a little shocked at first, I knew that my name was being considered, but I felt that my youth might be against me. I told everyone I knew to thank the committee for giving me this chance to play for my country,” Pele recalls. On July 9th, Pele had his first game with Brazil. Their opponents, Argentina, had them down 2-0 at the half, before Pele went in. He scored what was to be Brazil’s only goal that game, ending the game 2-1. When the two teams played again a few days later, Pele started the game as forward. This time Brazil won the game 2-0, with Pele scoring one of his team’s two goals.

In 1958 was possibly Pele’s greatest team success. It was the World Cup finals, Brazil versus Sweden. Pele stood with his back to the goalie and received a long pass. He used his chest to bring the ball down, rolled it straight off of his left foot, and before the ball hit the ground, flipped it over his shoulder, and spun to launch the ball into the goal with his right foot. A little note here, Pele was left-footed. Brazil won the game.

One thing that Pele always had going for him was the support of his fans. For instance, before one of his games against England, a group of Mexicans gathered outside the English players’ hotel, chanting “Bra-sil, Bra-sil!” The Eng­lish team manager had made derogatory comments about Mexicans after a previous game, causing this protest. On one instance, when Pele’s team was playing in the semi-finals, a stadium made to house 50,000 packed in 60,000 spectators. Another time during a Brazil versus Yugoslavia game, the score was tied, and then Pele entered the field area. The whole crowd began to chant at once: “Fica! Fica!” which translates to: “Stay! Stay!” This was shortly after Pele had left the team.

In November of 1974, Pele retired from soccer. On June 3rd, 1975, a man named Clive Toye hoped to change that. Toye held a press conference that afternoon, and as he took the podium, he held up a soccer jersey with the number 10 on it. Above the number read only 4 letters: Pele. Clive Toye began only by saying, “Today we have the shirt, and tomorrow we will have the man.” Clive was the general manager for the Cosmos, a professional soccer team. The amount that had been offered to Pele wasn’t publicly announced, but was esti­mated at close to $4.5 million. It wasn’t until February that Pele’s advisor announced that Pele was considering playing for the Cosmos. On April 22nd, Pele agreed to play, but wanted $5 million for the 3-year contract.

“I have to take care of my family and my business obli­gations,” Pele said after he changed his mind, and didn’t end up playing for them, “Nothing will make me change my mind now, I will not resume my career and will only take part in benefit games.” Even after this, the Cosmos continued to make offers to get Pele to play. Cosmo representatives met with Pele’s closest advisers, and worked out a deal they thought was perfect.

“Tell him if he doesn’t take it he would be dumb not only for the money, but for what he had previously said about being able to help American soccer,” said one of Pele’s ad­visers. A big part of the reason Pele had hesitated so long was because of his concern that his children got a good education. The Cosmos solved this problem, and the officials flew to Brazil to offer Pele what was estimated to be somewhere be­tween $4.5 and $11 for 3 years. After this offer, Pele held a press conference to address the matter.

“If this offer had come from West Germany, Spain, Italy, or even Brazil I would have to say no. But to return to playing in the United States would be a different principle. I love soc­cer. I’ve been playing it almost 20 years. Why not come to the U. S. to play, and help the game? New York is great for sports. I really feel if I came here I could give something to U. S. soccer,” Pele said to the reporters, still not giving his final decision.

Finally, Pele told the Cosmos that he would play for them. Pele’s legal advisers were still going over the contract, but Pele agreed to sign. He eventually did sign the contract, and took his place on the team, which was a great step for Ameri­can soccer. Pele led the Cosmos to many victories throughout his career, which he finished with the Cosmos. He did many great things for soccer and for soccer in the U. S.

This concludes my report of Pele. I hope I’ve informed you about the details of his life, why he was important, and the details about him, which also made him so great.