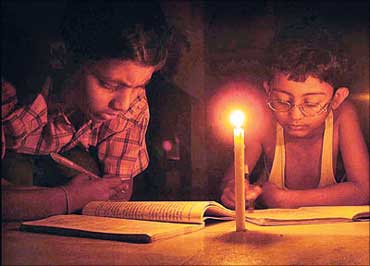 Last week, as the temperature soared to 47.2 degrees to make it the hottest day of this summer, most parts of Delhi sweated the day and night out without power for over 10 hours. Over 1,400 km away, suburban Mumbaikars were playing the waiting game for the monsoon and for power, which was switched off for over seven hours. In IT and BPO hot-pot Gurgaon, diesel gensets are not the backup but the source of power on most days. Being powerful is no guarantee of get­ting power there is no escape for residents of a swish colony, home to top notch politicians and Haryana Chief Minister Bhupinder Singh Hooda’s daughter-in Gurgaon either. The saga of eight-nine hours of powerless play has an echo up north in Jammu as well, even though it is hardly a buzzing commercial town.

To the inescapable certainties in a day-sunset and sun­rise-India has added power-cuts. The country is in the grip of a crippling electricity crunch that is worsening by the hour and gets heightened every season. The peak- hour demand is 100715 MW of which 86818 MW is met. The massive gap of 14 per cent or 13897 MW could power two states: Delhi and Uttar Pradesh. Worst affected are the industrial and agricul­tural belts of Punjab, Gujarat and Maharashtra where the short­fall has triggered seven to nine hour-long power-cuts.

Cities are fire-fighting everyday to meet rising energy needs. The desperate situation has fuelled desperate meas­ures. To tide over the pressing peak-hour shortfalls, Pune is buying the surpluses of power plants captive to industries and merchant outfits for Rs 7-10 per unit (against the average cost of Rs 3). The price is up on the entry of such distressed bulk buyers in the power markets.

What is most worrisome is not that successive govern­ments have failed to kick-start the turbines that fuel invest­ments in the power sector. But that there’s little to hope for either in the future. Successive governments have toiled with reforms that range from enacting stringent legislations, em­powering regulators and attacking subsidies to pushing states to privatise the distribution of electricity. And yet, the line that lights up cities and powers factories continues to trip at every point-funding, government clearances, generation, distribution and even the tariffs.

Despite sermons and reports, India has succeeded in knocking off just one percentage point of the peak shortage since 1991. In what must be the understatement of the year, Montek Singh Ahluwalia, deputy chairman of the Planning Commission, said last month: “We are at a critical point of policy credibility in this sector. We’ve been talking power reforms for over a decade. And yet, actual performance falls well below expectations.”

Supply cannot keep up with the demand because gen­eration projects do not come up on time. In the three five-year plans since 1992-eighth, ninth and tenth – only half of the targeted additions to generation capacity has come on steam. Thanks to the sloth at every level-from fuel linkage to land allocation to clearances from the state machinery. To gauge the ineffectiveness, stomach this: India’s economic growth rate is a tad below China’s, yet while the latter adds generation capacity of70000 MW every year, we added 21180 MW in the last five years. Bihar has not even added 1 MW of capacity in the last 10 years.

The crisis provoked the Prime Minister to say that “busi­ness as usual attitude will not work”. However, fact is it is business as usual. Sample the “alacrity and urgency”: In Janu­ary 2006, Manmohan had scheduled a crisis meeting of chief ministers on the power sector. It was ultimately held after a delay of 16 months on May 29 this year. Moreover, what did it consent to? At the end of a day’s brainstorming, the prime minister announced four committees including a panel of chief ministers to be set up shortly. If Manmohan evoked a sense of deja vu, it is because scores of committees have been con­stituted on the power sector over the last two decades the recommendations of which are still gathering dust. In the early 1990s, one headed by the then Maharashtra chief minister Sharad Pawar, for instance, had advocated among other things progressively raising the agricultural tariff from a floor level of Re 0.50 per unit to half the cost of supply. If acted upon, the agricultural tariff would have been Rs 1.50 per unit.

The prime minister should have outlined how states can embark upon these politically-untouchable goals at the con­ference last month. Instead, the session concluded without yielding a breakthrough. Manmohan got the diagnosis right but he ducked providing remedies. Much of what he lectured on-the poor progress of capacity generation, heavy losses, and wasteful consumption-was already known to the states. For instance, in 2001-02 the Centre had incentivized states with financial assistance to control leakages from the delivery net-works by cutting them at the rate of 9 per cent a year. The reduction rate in the following four years was 1.68 per cent per annum.

Part of the problem is that over a third of the power gen­erated is lost, as corrupt politicians look the other way while ingenious industrialists steal it from under their noses. Some bit is wasted, as the transmission networks cannot handle overloading. Such aggregate technical and commercial (AT&C) losses have mounted to over 50 per cent in Bihar, Maharashtra and Madhya Pradesh. AT&C losses have touched Rs 47,000 crore a year-equal to the UPA’S allocation to pov­erty alleviation last year. “The states have to treat electricity as a manmade commodity. Not gifted by God. It must be paid for. Until that realization comes, this sector will continue to be a problem in the states,” power secretary Anil Razdan told the Parliamentary Standing Committee on Energy (PSCE) last month.

The cost of inertia will be huge. Already, even 60 years after Independence and despite the UPAS claims of an Aam Admi agenda, one in two rural households does not have an electricity connection. And according to an estimate, the GDP growth rate of 9.4 per cent may well have been 10 per cent but for the crunch. The steep industrial growth at a new high of 12 per cent could fall flat. The likelihood of that still hasn’t beeped on the states’ radar. At a time when factories are los­ing one of the three daily shifts to loadsheddings, 27 per cent of the electricity produced is diverted to vote banks of the farm sector. That too, subsidized. Or free, if in Punjab or Tamil Nadu.

Biting the bullet on power politics can control the losses. States are, however, in reverse gear. Former power minister Suresh Prabhu had egged Jayalalitha-ruled Tamil Nadu and Congress-governed Punjab and Madhya Pradesh into abol­ishing free power in 2003. But they reintroduced it within months as a poll gimmick. After the enactment of the Elec­tricity Act in 2003, states have to foot the bill for their power profligacy. They still pass on part of the burden to the dis­tributors by not installing meters so that supplies aren’t meas­ured. Gujarat and Andhra Pradesh are exceptions. Meters at the transmission source have helped cut their AT&C losses to 24 per cent and 16 per cent respectively.

Worse, despite the shortfall, even existing capacity is not being utilized. In Andhra Pradesh, 1499 MW is ready for commissioning but doesn’t have fuel linkage. For almost three years now, an empowered Group of Ministers has deliberated but PSCE that not even a unit of any of the nine UMPPS would be ready by 2012 failed to re-start the 2019 MW Dabhol plant at Ratnagiri in Maharashtra. Even the skew or the bias towards thermal power plants is not being corrected. Of the total hydel potential of 1.5 lakhs MW, only 30 per cent has been exploited. In 2004-05, only 5 per cent of what was gen­erated by captive plants was made available for sale.

The UPA’S latest mantra, 4000 MW ultra mega power plants (UMPPS), too seems to have tripped. Investors queued up for profitability and scale. However, only two of the nine planned have been awarded and even they – Lanco in Sasan, Madhya Pradesh, and Tata Power in Mundra, Gujarat-are stuck since December 2006 in controversy and clearances. Even if cleared, Razdan confessed to the. The government, however, is preening on a target of 68000 MW for 200812, which is three times the achievement in the last five years. It is a for­midable target. If the committee approach adopted at the power conference is any indication, power cuts are here to stay.