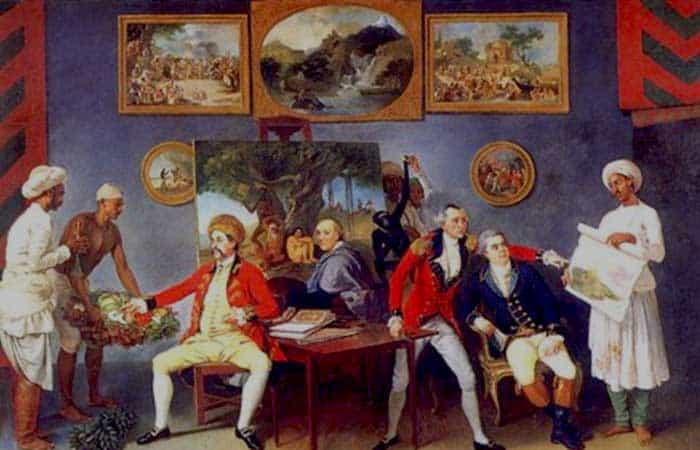 WHAT MADE THE BRITISH CONQUER INDIA?

“British came to India merely humble traders but either the misfortune of Indians or the fortune of the British they became the rulers and ruled this vast Country for centuries very successfully”.

It is indeed a Herculean task to sum up the circumstances, reasons, causes, Godly favours and other facts which made the traders the despotic rulers. Some historians opined that British Empire was established almost in a fit of absent mindedness but it will be an unreasonable point of view to conclude as without motive, without perspective of circumstantial success, the British could not have become the rulers. So keeping in view, the reasonably acceptable motivation of all those who established the British Raj in India, some justice could be done with the concluding scenario. Let us study the various factors and circumstances that prevailed and the changing motives with bright future perspectives which turned the commercial people into successful rulers.

The first factor to be taken into account is that the British by nature are conservative. Their history illustrates that rarely they had put a programme or a plan before themselves and then acted upon it. The classic example in English history was the victory of the Parliament over the king. For more than one-and-half centuries in British history there was a confused wrangle between the King and the Parliament. One can safely say that the Parliament came out victorious in the year 1688. Surprisingly, to a foreigner, the justification or theory for this victory of Parliament was provided by John Locke after 1688. This example proves that the English by nature are not given to theorize but are guided by pragmatism. In all probability it was pragmatism that governed the British conquest of India.

The third factor was the internal condition of India. After the death of Aurangzeb, the Mughul Empire started declining rapidly. Within a quarter of a century the Mughul emperor became a nominal ruler. The Sikhs, the Rajputs, the Mar at has, the Nizam and even the provincial viceroys of Oudh and Bengal virtually severed themselves from the Mughul empire. Particularly, after the invasion of Nadir Shah there was great confusion in the political field. And as historical evidence shows this confusion could not be exploited to one’s own ends either by the Rajputs, the Marathas or the Nizam. In other words, there was a political vacuum in India and this itself was an attraction to the British to establish their rule.

The fourth factor that determined the destiny of India was the singular truth of the conflict between modernism and medievalism. After the English came out victorious over the other competing European rivals, the fight was a straight one between England and the ruler’s of India. This fight began in the middle of the eighteenth century. England of the eighteenth century had graduated in the renaissance spirit, a maturity which enabled an individual to regard himself as the maker of his own destiny. Added to this, the benefits of technological knowledge and scientific attitude aided the British in middle of the eighteenth century. One of the concrete manifestations of the assets of science was the ‘Industrial Revolution’. The benefits of this revolution, both materially and psychologically) boosted the prestige and confidence of England. Such were the ingredients in the modern outlook of England. On the other hand the picture of India was quite poor. The soldiers of the local rulers in India owed their loyalty to the chiefs and not to the kingdom that is it was neither state nor nation for which they fought. The soldiers were mercenary in their nature and had no sense of loyalty to the state or the nation. The economic strength of the ruling dynasties was also precarious. None of them was a modern state to evolve a sound financial organization to sustain themselves in times of long drawn-out conflicts. Nor were they strong enough to organize united resistance, i.e., there was no sense of nationalism or pride in one’s own country, the main cause being illiteracy.

The fifth factor or force that led to the establishment of the British Raj in India was the changing political consciousness of England. In the seventeenth century much thought was not given to the establishment of an empire. The concentration was more on the earning of bullion because mercantilism was the governing principle of the country’s economic policy. Although, mercantilism was the guiding factor, England lost in its trade with India. It was only after 1757 that the economic drain of India began. And from the mid of the eighteenth century the English policy of mercantilism underwent a transformation and also its policy toward the empire, particularly after the loss of American colonies in 1783. Imperialism, as a policy, was advocated as late as the second half of the nineteenth century. Therefore, we have to admit that the changes in the political awareness of England also influenced the British conquest of India.

Keeping all the factors in mind and in particular the proverbial nature of the British nation in christening events and achievements after their occurrence, we can examine the motivation behind the conquest of India. In the very early stages the directors of the Company were very reluctant to involve themselves in any activity beyond trade. The historian of the East India Company, Kaye, states that above all things the London merchants who hated the increase of dead stock were frightened of the growing number of factories. They primarily concentrated on brisk trade and a good dividend. Secondly, it is also interesting to note that the chief cities of Bombay, Madras and Calcutta were acquired by the British by agreement and not by conquest. Madras was acquired from the Raja of Chandragiri on lease. When the Company’s agent day, proposed to fortify the place, he was rebuked by the court of directors in England. Calcutta was also acquired in the form of the three villages of Sutanati, Kalikata and Govindpur by Job Charnock. Interestingly, in 1746 one Col James Mill worked out a plan for the conquest of Bengal and this was submitted neither to the East India Company nor to the British Government, but to the Austrian Emperor. Although the directors, in general, discouraged acquisition of territory, some of the steps taken by them were significant. In the Charter issued to the East India Company in 1661, it was recognized that the Company was allowed to establish a municipal corporation for Madras, thereby nutting the official stamp on the territorial character of the company.

Even after the victory of the Company over the French and the acquisition of the diwani territories, the directors of the company and also the House of Commons expressed their distrust at the growing political nature from time-to-time. E.g., in 1784 the House of Commons adopted the resolution that “to pursue schemes of conquest and expansion of dominion in India is contrary to the wish, the honour and policy of the British nation.” The court of directors recalled Lord Wellesley when they found that he was proceeding too fast. It also censured Lord Hastings both for his military campaigns and also for expanding the territory.

In spite of these pious professions and warnings, the British territory in India expanded because most of the pro-consuls sent to India took decisions on their own. They adopted the policy of expansion as a matter of choice. Added to this, although the court of directors censured some of the pro-consuls they never abandoned the territories that were acquired by the latter. Surprisingly, even those who opposed the expansion, too, were converted to the policy of expansion, e.g., when Marquess of Hastings was appointed as Governor-general, he decided to follow a policy of peace without any reservation. But, he radically changed his opinion after a few years of stay in India. Also Lord Ellenborough came to India “to restore tranquility to both banks of Indus”, but he proved himself the most imperial autocrat in his dealings with Scindhia and Gwalior. Here the comment of RC Mazumdar is significant “It would perhaps be unjust and unnatural to regard all the governors-general as devoid of sense of justice and morality. The real explanation of the strange phenomenon recorded above evidently lies in the political disintegration of India and the ease with which different parts could be absorbed in the British Empire.”

In this expansion, the year 1818 marks the establishment of the British paramountcy. Here the words of Marquess of Hastings are pertinent that “Our object ought to be to render the British Government paramount in effect. If not declared, so we should hold the other states as vassals, in substance though not in name…” And in 1841, the court of directors laid down that the company should “persevere in the one clear and direct course of abandoning no just and honourable acquisition of territory or revenue, while all existing claims or rights are at the same time scrupulously respected.”

Once again here too, we must concede that the British were often startled by the magnitude of their success. A number of leaders prognosticated on the gloomy future. Charles Metcalfe underlined the precariousness of the new dominion and Sir John Malcolm wrote that in an empire like that of India we are always in danger.”

Nevertheless, the British policy of expansionism became clear by the year 1818. Therefore, we can say that although the British policy began without any clear-cut aim it ended as paramountcy in 1818 and from paramountcy to imperialism, as acknowledged in the proclamation of Queen Victoria as the Empress of India (1876), was a short step forward.