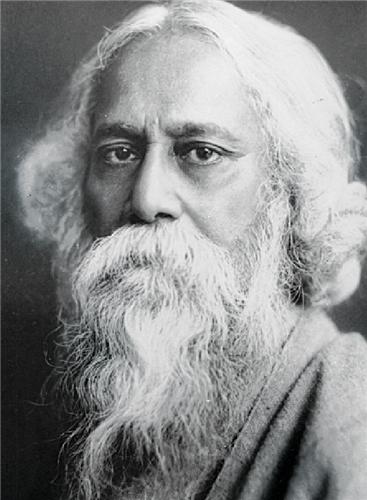 Rabindranath Tagore was one of the greatest poet§ of India. He was the winner of the Nobel Prize which is awarded to the greatest men of science, literature, and special services. His most famous book of songs is Gitanjali. This book was particularly selected for the awarding of Nobel Prize to him.

Rabindranath Tagore wrote his poems in the Bengali language. He translated his own Bengali poems into English. His book of poems Gitanjali bears an introduction by the great English poet. Y.B. Yeats. It was this introduction which won him international reputation and helped him to win the Nobel Prize. At that time Yeats was not himself a Nobel Prize-winner, although he was very distinguished as the English poet of international reputation. Y.B. Yeats also won the Nobel after he helped Rabindranath Tagore to win it.

Rabindranath Tagore was not only a great poet; he was also a great dramatist and a story-writer. He was also something of a painter. He was also an educationist and a patriot. He used to act in his own plays. He was the founder of Shantiniketan, a University of liberal arts near Kolkata, where many scholars from foreign countries come and get their education in arts and humanities. Our late Prime Minister Mrs. Indira Gandhi was also educated in the University of Shantiniketan for some years. To meet the expenses of the Shantiniketan University, Tagore often held dramatic performances in India and abroad and collected ticket money as well as donations for the purpose of education.

Rabindranath Tagore was also a great patriot and a close friend of Mahatma Gandhi and other freedom fighters. He offered them every help in the struggle for freedom. He was awarded knighthood (the title of “Sir” by the British after he had won the Nobel Prize but he returned it to the British for freedom’s sake. He did not think it nice to accept any honours from the British while they were ruling our country and holding our nation in subjection. Our national song Jana Gana Mana was composed by Rabindranath Tagore. Wherever and whenever you hear the national anthem, your are indeed hearing the voice of Rabindranath Tagore.

Next to Kalidas, Tagore is the most famous poet of India. He is known as the Shakespears of India. Tagore travelled widely in many countries including China, Japan, Switzerland and other countries. There are many memorials of him all over the world. In Chandigarh there is a famous Tagore Hall. In Delhi we have Tagore Garden, which is a township and also Tagore Gallery of Art. The statues of Tagore are found in many places. Next to Mahatma Gandhi, Rabindranath Tagore is one of our greatest legendary figures which have become immortal institutions in themselves.